Late last month, Ritchie J. Torres, a popular city councilman from the Bronx, introduced a bill that would forbid certain businesses in New York from refusing to accept cash. During the past few years, these businesses, most of them in the same vein — fast-food restaurants with an elevated sense of themselves — have multiplied in cities around the country. Like so many ideas born of Silicon Valley philosophy, they traffic in the dueling vibes of earthiness and automation, emphasizing food that is supposed to suggest a time predating the invasions of technology — root vegetables, seeds, raw food, leafy food, local food — but then demanding that it all be paid for via the preferred methods of Apple and the international banking conglomerates.

I first encountered the imposition of cashless dining a few years ago at a branch of Sweetgreen on Wall Street, which, on the face of it, seems like a strange place to dismiss the significance of actual money. I had been reading a magazine all through the long, long line full of young hustlers, all of us eager to get to the curried cauliflower and uncooked corn. Thus, I did not realize until my salad full of cholesterol’s fiercest enemies had already been assembled, that the cashier was totally uninterested in the $20 bill in my pocket. Without a credit card or a debit card in my possession, I would be forced, apparently, into a lunch elsewhere that could be measured only by its toxicity.

There are various arguments to be made against cashless businesses — the inconvenience falling to people too scattered to leave the house with a wallet being merely one of them. The strongest objection relates to the ways in which rejecting physical currency plays out as a bias toward the poor, advancing segregation in retail environments.

According to government data, close to 7 percent of American households have no one in them with a checking or savings account, while an additional 19 percent are considered “underbanked,” meaning that they rely on products or services outside the conventional financial system. These include money orders and payday and pawnshop loans. The majority of people who fall into these categories are nonwhite.

“It is bad enough that the poor are already so stigmatized, and now we are stigmatizing them even further for the way they consume goods and services,” Mr. Torres told me. “I talk a lot about effective discrimination. But this amounts to intentional discrimination, because these businesses that don’t accept cash know exactly who they are keeping out.”

Prospect Street in Brooklyn, the heart of a recently manufactured neighborhood known as Dumbo Heights, is as good a place as any to observe the pretenses and contradictions of contemporary capitalism. A stretch of formerly industrial buildings, owned in part by the Kushner Companies, houses the corporate offices of Etsy, the tech-enabled craft empire, and an outpost of WeWork, where the kegs are flowing and the toil of office life has been reimagined as a party. 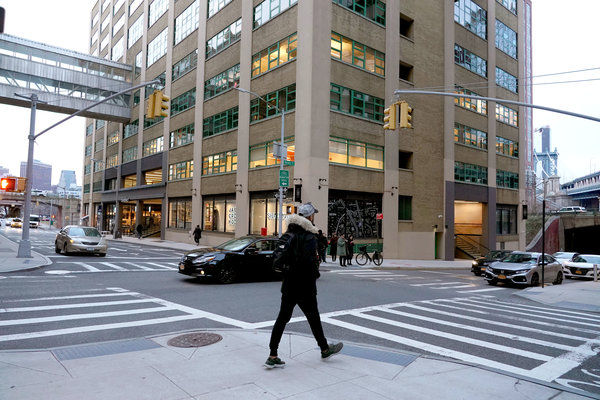 WorkOf, a store absorbing the surrounding mood and showcasing handmade furniture and vases and key chains and lighting fixtures, all from independent designers does not, it turns out, extend its branding in intimacy to accepting cash.

Neither does Bluestone Lane, with its live performances and hygge feel and turmeric sweet-potato-hummus toast, or the place next door, Mulberry & Vine, another health-food franchise. Here the motto is “Live Dirty, Eat Clean,’’ which seems to sum up rather efficiently the prevailing ethics of the current moment: “Plunder and pillage all you want, just stay away from trans fats and farm-raised salmon.”

When I visited the outpost in Brooklyn the other day, everyone behind the counter was black and everyone in front of it was white. But presumably, eating there would help make the world a better place because my fork would be recycled and the charred avocado I had eaten was dressed with non-GMO canola oil.

A bill similar to Mr. Torres’s was introduced at the state level in New Jersey this week; it has been opposed by the business community, which sees the gesture as a threat to “innovation.’’ In Chicago, similar legislation failed to become law. Last year, Visa announced that it was “declaring a war on cash,’’ and it said it would give small-business owners around the country as much as $10,000 as part of plan to push forward digital payment technology. Visa, as it happens, receives a fee for every payment processed on its network.

The increasing movement away from cash, which businesses often justify as a defense against crime, even if urban crime rates in many cities are at historic lows, comes with other consequences, many of them negative.

It is easier to spend more than you intend when you are paying for your lunch with a credit card, to get the fizzy grapefruit drink when, really, you’d be fine with water. When cash is renounced you carry less of it, or maybe even none of it. And so you are not as prone to certain spontaneous acts of generosity — to put a few dollars in a tip jar where workers are underpaid or give money to a homeless person on a cold night on your way home from work.

Forcing people to use credit cards also forces them into compromising their privacy while paradoxically making everyday exchanges feel more impersonal. Businesses see this as efficiency, and efficiency is profit. And as the recent revelations from Facebook suggest, what else matters?