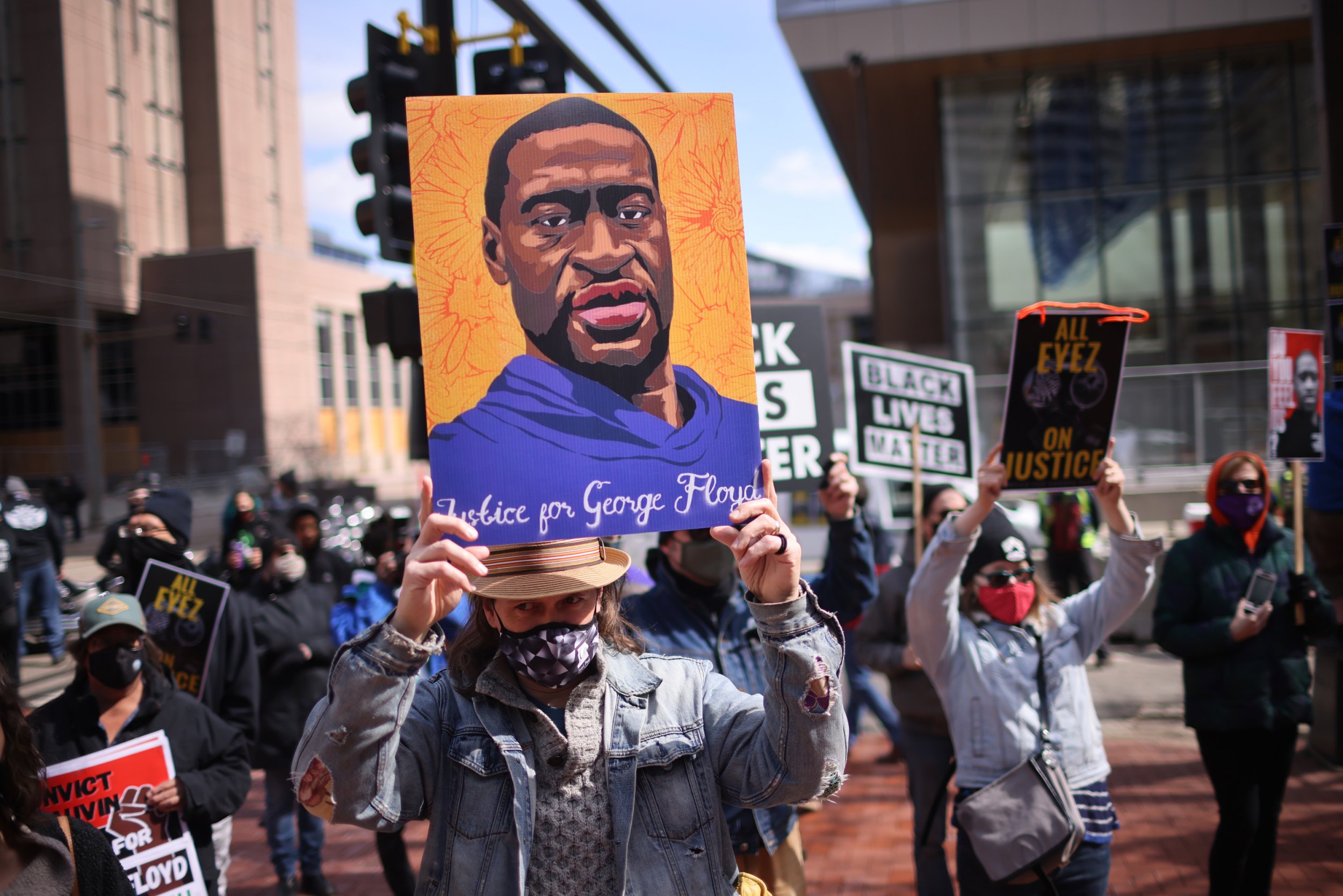 To Tyrek Morris, 23, of the British youth-led Black liberation group All Black Lives UK, it was almost routine at this point.

His phone would flash with a notification — another Black person shot, tasered, beaten, choked or ‘restrained’ by police.

The police statement was short this time.

A counterfeit bill used to buy cigarettes at a convenience store, a man ‘under the influence’ who ‘physically resisted officers’ and appeared to be ‘suffering medical distress’.

Bystander footage told a different story: A man handcuffed and pinned to the ground under the knee of white Minneapolis police officer Derek Chauvin.

The man shouted and sputtered ‘I can’t breathe’ again and again.

Morris tells Metro.co.uk: ‘At that point, I was numb to it.

Soon enough, the video — and so many others like it — was everywhere. On Twitter feeds and Whatsapp groups, then newsfeeds and political speeches.

Though Floyd’s murder was the spark, the fuel needed for a large-scale movement had been pouring and overfilling for decades, Morris says.

But realising this ‘numbness’ to a Black man not unlike himself dying emboldened him and so many others to get back involved with Black Lives Matter.

Black Lives Matter, an almost decade-old decentralised movement, seeks to bring attention to the long-ignored and deadly issues of racism and racial inequality.

The movement came to heat in 2013 as a response to the acquittal of George Zimmerman in the shooting death of Black teen Trayvon Martin 13 months before.

‘Black people die on a day-by-day basis at the hands of the police, racism, police brutality, and it’s never mentioned,’ Morris says.

‘But with George Floyd, dare I say it, and I don’t mean it with bad intent, it was the wrong situation at the right time.’

And that time was one so many have worked to forget. The throes of the coronavirus pandemic, with people stuck indoors as a mysterious disease infected thousands and begun killing hundreds.

Natasha Johnson, 23, also a member of All Black Lives UK, was among those watching Floyd’s murder from inside her home.

‘When it happened, I was watching it happen and unfold in real-time. We kind of just said, together, like, what are we gonna do? We felt so much personal responsibility,’ she says.

Floyd’s murder — and the disturbing similarities to the countless deaths of Black people before him — sparked a racial justice movement not seen since the 1960s.

Black people exhausted by years of peaceful protest and court goings-on that went nowhere felt they had no other option. It was now or never.

Protests against police brutality and institutional racism erupted worldwide and a reckoning swept over everything from public statues to tea brands.

‘You’re seeing the whole world waking up and reacting to this thing. And it’s like, this has to be the start of the change because everybody’s able to access it now,’ says Johnson.

‘Everybody’s able to see it now. So it gave us much more of a voice.

‘I think it kind of changed the trajectory of everything in so many people’s lives.’

And more tinder was thrown into the bonfire when body camera footage showed how much Minneapolis police’s side of the story missed out key details.

How did George Floyd die?

Officer Thomas Lane tapped his flashlight on the back of a car with Floyd sitting inside. He opens the car door and apologises for not getting out sooner.

‘Put your f***ing hands up right now,’ Lane shouts, without giving a reason why as he dragged Floyd out of the car, the video shows.

Officers force him into the back of their squad car, which Floyd resists as he is claustrophobic and manages to lie on the ground instead.

Three officers then pin Floyd, accused only of using a fake $20 bill, to the ground — Chauvin on his neck, Lane on his leg and J Alexander Kueng on his upper legs.

Chauvin kept his knee pressed against Floyd’s neck for nine minutes. Even as passersby pleaded for them to stop and Kueng could no longer feel his pulse, the officers continued to hold Floyd in a position that restricted his breathing.

That night at 9:25pm, Floyd died at a nearby hospital.

All Black Lives UK activist Aima, 21, says that more than two years since Floyd’s death, the ‘shocking and disgusting’ video haunts her.

‘When I saw the video, I was shocked. I still haven’t watched the full video to this day. I cannot do it. It’s too traumatic,’ she says.

From Australia to Germany, Kenya to a small group of researchers in Antarctica, more protests following the video’s release burst with speeches, chants and songs that all said the same thing: Black Lives Matter.

Britain took part too (All Black Lives UK included) even as the right-wing screamed for them to stop in testimony to how the establishment felt so threatened by the mere acknowledgement of centuries of racism.

‘This country is too old for people to think this stuff doesn’t exist. It’s a lie. It’s a delusion. It’s a fantasy that we’re falling further and further into.

‘I thought what was going on needed to be the thing that made British people wake up.’

Activism slowly took its toll on Johnson that summer. ‘It literally gives you trauma,’ she says, ‘but I was willing to go through this for the benefit of other people.’

Aima adds: ‘I was active on the ground in London. It was traumiatising. Fighting for your rights is something we know isn’t going to be easy breezy.

‘But if you erased all history of racism, you would think fighting for justice would not be as hated as it is. But it is. We all got so much hate.’

‘The police just hate us so much. I had people come up to me at protests and threaten me,’ she says.

‘This is the price you get for fighting for your rights. It’s not supposed to be a normal thing but it is for us.

‘One day before I went out to a protest I got a call from another activist saying don’t leave your house. The police are asking for you by name.

‘I had to leave, I did not come back to the UK for a month. I was so frightened to be in this country.’

What happened after Derek Chauvin was jailed?

Chauvin was dismissed from the force only a day after Floyd’s death before being arrested and charged with third-degree murder and second-degree manslaughter.

One month later, Terrence Floyd would visit for the first time the site of his brother’s death, a man his family affectionately called ‘Perry’.

That same day, two autopsies by a government agency and Floyd’s family ruled his death was a homicide.

And only two days after that, the other three officers involved in Floyd’s killing — Lane, Kueng and Thao — were charged with aiding and abetting the killing.

In March 2021, Chauvin, who ignored the desperate, breathless please of Floyd under his knee, was put on trial and sentenced to 22 and a half years in prison.

‘Why?’ said Terrence after the ruling, ‘What were you thinking? What was going through your head when you had your knee on my brother’s neck?’

Floyd’s killer would come to be sentenced again (21 years) for using excessive force under colour of law against Floyd and a Black 14-year-old boy.

Thao was sentenced to serve 42 months in prison, while Kueng and Lane were handed 36 months.

The sentences brought to an end the legal side of Floyd’s murder.

Floyd’s death, it seemed, wasn’t going to be forgotten this time around. While change did happen, it wasn’t as much as hoped.

The protests brought with them greater visibility and support.

More conversations over how police budgets could be better spent (or yanked altogether), better policy-making to prevent police violence and the normalisation of filming the people sworn to protect carrying out Black pain.

The mobilisations soon quietened down — but the reason for them hasn’t gone.

The number of Black people in America killed by police actually increased over the last two years.

Black people, who make up 13% of the population, accounted for 27% of those fatally shot by police in 2021, according to the police shooting monitoring group Mapping Police Violence.

A Black person in Britain, meanwhile, is still twice as likely to die in police custody than any other ethnicity.

After all, stresses Aima, Britain would once again grapple with its own pattern of anti-Blackness in the death of Chris Kaba, 24, an unarmed Black musician shot dead by a police officer in London last month.

‘One phrase I heard a lot during 2020 is that if it happened in America it can very much happen in the UK,’ Aima says.

‘We saw it literally with what happened to Chris Kaba.’

‘People are really evil. What we’re doing, we’re not hurting anyone. If anything, we’re trying to stop the hurt of others,’ she explains.

‘We’re not coming from a place of, we want all white people to pay for these crimes. We literally just want to be equal and we can’t even get that.

‘But I feel we could all agree we wouldn’t rather be anywhere else. I can’t imagine having any other purpose than fight for the oppressed.

‘We all deserve to live an equal life.’

Aima says she has many reasons to keep the fight going. Her and anyone’s Blackness, she says, shouldn’t be a reason to hold someone back.

‘It’s so scary to fight for the right to live and the right to do normal things. And whilst you’re being blasted with hatred and abuse. It’s so hard. Every time I hear a police siren, my brain just goes… done,’ she says.

‘But still,’ Aima adds, ‘I would do everything over again.’