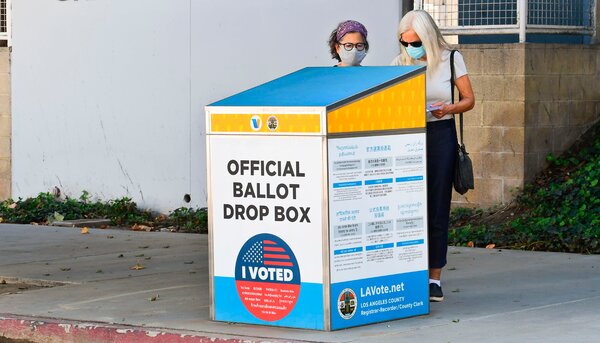 Over the weekend, reports and images surfaced of unauthorized ballot drop boxes that were fraudulently labeled “official” in Los Angeles, Fresno and Orange Counties. On Monday, California’s secretary of state, Alex Padilla, made it clear that unofficial drop boxes are illegal and can lead to voter fraud.

“Misleading voters is wrong regardless of who is doing it,” Mr. Padilla said in a conference call with reporters.

Republican officials admitted to purchasing and placing the boxes near churches, gun shops and Republican Party offices in conservative areas across the state.

Mr. Padilla and Attorney General Xavier Becerra sent a cease-and-desist order to the state- and county-level Republican parties, ordering them to remove the boxes immediately.

More than 50 boxes had been placed over the weekend before they became public, but party officials said they bought about 100 total in an attempt to boost turnout.

Hector Barajas, a spokesman for the California Republican Party, said that the party would continue to distribute the boxes, which he referred to as “our ballot harvesting program.”

How can I spot an official ballot drop box?

Only official drop boxes that have been authorized by the state can be used to collect mail-in ballots. Official ballot drop boxes are secured in designated locations and marked with a county seal. “Any misuse of a county seal is a violation of law,” Mr. Padilla said.

You should use only collection sites listed on the state government’s election website.

What are the other ways I can return a mail-in ballot?

If you do not want to use drop boxes you can, of course, easily return a ballot in the mail being that there is no postage required. You can also return them at voting locations.

You can also vote in person, and election officials have taken precautions to reduce the risk of spreading the coronavirus at polling sites. There are a few things to keep in mind, however, like holding on to your mail-in ballot in case you are required to surrender it at the polls.

What if I accidentally returned my ballot to an unofficial drop box?

The concern for people who might have left ballots in unauthorized boxes is that there is no official path to having it returned to an elections office. An unknown person has custody of those ballots. Although state law requires people who assist in the delivery of ballots to deliver them within three days, it is unclear whether this has happened. In addition, some of the boxes placed by state Republicans did not have locks.

However, if they are received by county officials, the ballots will be counted even if they do not have a third-party signature typically required for collected mail-in votes, Mr. Padilla said.

The reports of illegal boxes first surfaced in Orange County. Neal Kelley, the county’s chief election official, told me, “It’s unclear how many voters may have used these unofficial drop boxes or exactly how many were placed, however, I reacted quickly to this issue and my office has passed along reports of social media posts of unofficial drop boxes to the Secretary of State and our local district attorney.”

If you think you might have dropped your ballot into an unauthorized ballot box, Mr. Padilla is urging voters to sign up for the Where’s My Ballot? tool to ensure that it has been processed and counted.

What should I do if I see an unofficial drop box?

The California Republican Party has admitted to placing illegal ballot receptacles around the state.

The Orange County Register first reported on the unauthorized metal drop boxes over the weekend.

CalMatters looks into the practice of ballot harvesting in California elections.

Over the past few weeks we’ve written about what you need to know if you plan to vote in California. Here’s a voter guide with all of that information in one place.

California released new guidelines for the upcoming holiday season that prohibit more than three households from gathering together at once. [Los Angeles Times]

Millions of Californians are hoping for financial relief in the form of federal aid. As that support is looking more unlikely, schools and other state-funded programs must find a way to absorb more than $11 billion in cuts. [CalMatters]

Officials from the Michelin Guide said they would not award stars this year to restaurants in California, citing the devastating effects of the pandemic and wildfires on chefs and restaurateurs. [Mercury News]

There’s hope for Cronutt, a 7-year-old sea lion, who underwent groundbreaking brain surgery on Tuesday to treat epilepsy caused by environment factors. Climate change has spawned increased algae blooms, which release toxins in the water that have led to an epilepsy plague among sea lions and sea otters, my colleague Matt Richtel reported. The procedure was performed by three neurosurgeons at the University of California, San Francisco. If the treatment works, scientists are hopeful it will prevent the disease that thousands of other sea lions have already succumbed to.