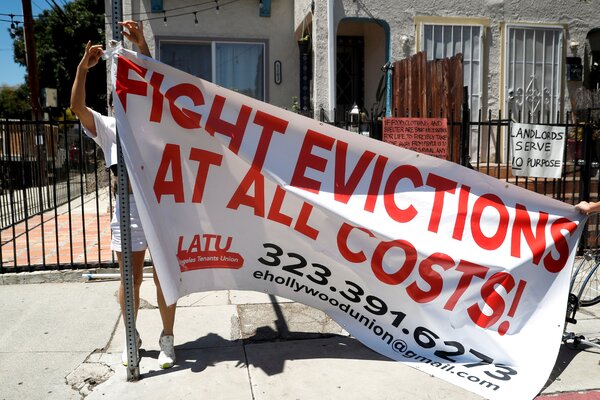 Perhaps it’s a sign that the worst of the coronavirus pandemic is behind us, or that it's stretched on far longer than we ever expected, but two key pandemic-related safety net programs are soon coming to a close.

Starting Friday, the first day of October, Californians will no longer be guaranteed up to two extra weeks of paid sick leave for Covid-19 illnesses, and, for the first time in more than a year, landlords will be able to kick tenants out for not paying their rent.

Many low-income workers are angered by the termination of these programs, especially just weeks after 2.2 million Californians lost enhanced unemployment benefits. But it doesn’t seem likely the safeguards will be extended.

For renters, however, other kinds of financial aid are available — and they may be far more helpful than any assistance thus far.

If you need rent relief

First, it’s important to note that though the state’s eviction moratorium is expiring on Sept. 30, some places in California have local laws that will continue to prevent landlords from evicting tenants.

Those include Fresno County, Alameda County, Solano County as well as the cities of Berkeley and Oakland. Your town might have a similar protection.

But no matter where you live, people who meet income requirements can take advantage of a state program that offers to pay 100 percent of back rent accrued during the pandemic as well as unpaid water and electricity bills.

If that sounds as if it would cost a huge amount of money, that’s because it does. The $7.2 billion California has made available amounts to the most expansive rent forgiveness program in United States history.

There’s no deadline to apply, and the state will continue to dole out funds until they run out. Californians can get up to 18 months in back rent covered.

“Apply as soon as possible, but no one should fear that the rent relief program is going away any time soon,” Gustavo Velasquez, director of the state’s Department of Housing and Community Development, told The Los Angeles Times.

To qualify for the rental assistance, you must have been somehow financially harmed by the pandemic — though no proof is required — and your income must be below 80 percent of the annual median income in your region.

You can browse those income limits here and apply for rental assistance here.

The state’s program, made possible in part by our unexpected budget surplus, could theoretically cover unpaid rent for every Californian.

According to an analysis from PolicyLink and U.S.C. Equity Research Institute, 14 percent of California households owe back rent, which amounts to a total of $2.5 billion in rent debt.

That’s less than half of the funds the state has available.

A federal program aimed at halting evictions is showing signs of improvement.

Veterinarians and farmers are struggling with surging demand for a deworming medicine that some Americans falsely believe treats Covid-19.

Satellites: The Pentagon’s spacecraft have repeatedly proven themselves to be superior at spotting blazes. So why don’t more firefighters have them?

Instagram for children: Facebook said on Monday that it had paused development of an Instagram Kids service that would be tailored for children 13 years old or younger.

Ballots by mail: Under a new bill signed on Monday, a ballot will be mailed to every registered California voter in future elections. Voters will still have the option to send in their ballot or vote in person, according to The Associated Press.

Ohio travel ban: Ohio’s new state law that allows doctors to decline services based on moral or religious grounds has caused a 2016 California law to take effect. Under this law, state-funded travel to Ohio will be prohibited, The Sacramento Bee reports.

Garment industry rules: Gov. Gavin Newsom on Monday approved a law requiring the garment industry to pay workers by the hour instead of for each piece of clothing they produce, reports The Associated Press.

Hospital staffing shortages: As a statewide vaccination mandate for hospital employees takes effect this week, there is a looming fear that people will choose to quit rather than be vaccinated, according to The Associated Press.

Recall election in Riverside: Recently posted results from the governor recall election showed that a majority of Riverside County voted to recall Newsom, according to The Press-Enterprise.

Wildfires: Firefighters are still working to contain the Windy fire, the K.N.P. complex fire and the Fawn fire, which are encroaching on ancient sequoia forests, according to The Associated Press.

Bike paths: This interactive map created by The San Francisco Chronicle shows how the city’s bike paths are being remade in the pandemic.

The Michelin inspectors have added eight restaurants to their selections in San Diego and Orange Counties.

“Downtown Chico is a delight for roaming; historic buildings, boutiques, bars, bookstores, restaurants, outdoor cafes, art galleries and antique shops line the streets. The National Yo-Yo Museum has the largest public display of yo-yos and memorabilia in the U.S.

Bidwell Park, established in 1905, is its crown jewel. It is one of the largest municipal parks in the U.S. (3,670 acres) with approximately 60 miles of dirt and paved biking/hiking trails. Sycamore Pool, at the One-Mile Recreation Area, is a local hangout. Middle and Upper Park are perfect spots for exploring. The scenic Sacramento River is a short 10-mile drive from Chico and a mecca for tubing and fishing.”

A couple fell in love after finding common ground in the South, South India and San Francisco.

Read about their recent wedding in The Times.

Mariel Wamsley contributed to California Today. You can reach the team at [email protected].