Before and after images have shown the devastation Hurricane Laura has brought to the Gulf Coast of the US.

The category 4 storm, one of the strongest to ever hit the US, left six people dead and flattened buildings across Louisiana on Thursday before moving inland to Arkansas with heavy rains.

Laura’s maximum sustained winds of 150mph on landfall were faster than Hurricane Katrina’s 125mph winds in 2005.

Satellite photos taken before and after the hurricane in Lake Charles, Louisiana, show homes, a high school, a hospital and an airport flattened.

Pull the slider across to see before and after photos from Lake Charles:

The storm crashed into the low-lying industrial and casino city of 80,000 people, blowing out windows, collapsing buildings and splitting trees.

A floating casino came unmoored and hit a bridge, while small planes were thrown on top of each other at the airport.

In front of the courthouse, a Confederate statue – which local officials had voted to keep in place days before – was knocked down by Laura.

A large plume of smoke was seen rising from a chemical plant that was making household cleaners and chlorine powder for pools after it was hit, with a fire smouldering through the night.

He described a roar like a jet engine as Laura passed over his house at around 2am.

“There are houses that are totally gone,” he said.

Forecasters warned a full assessment of the damage could take days and by then, the storm could re-energise and pose a threat to several highly populated northeast states by Saturday.

The hurricane was downgraded to a tropical storm at 10pm on Thursday, with winds of 40mph, as the National Hurricane Centre said it will move to the mid-Mississippi Valley later on Friday then to the mid-Atlantic states on Saturday.

But Laura is still unleashing her fury, with new tornado warnings issued for Arkansas and Mississippi, hundreds of miles from where the storm first hit on Louisiana’s Gulf Coast, near the border with Texas.

A reported tornado tore off part of the roof from a church in rural northeastern Arkansas. 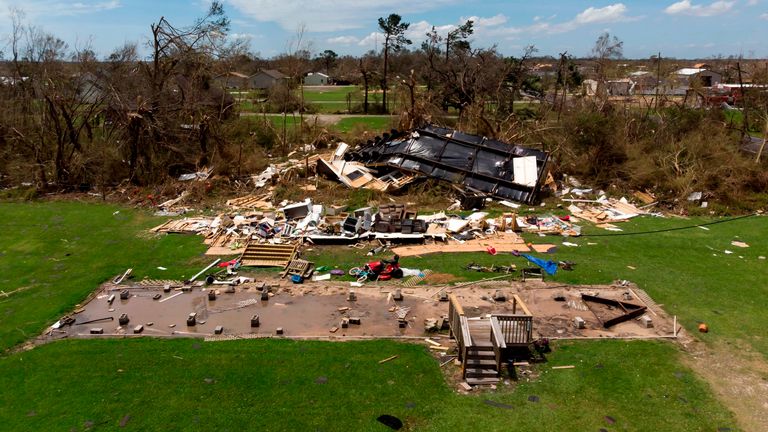 Louisiana’s governor, John Bel Edwards, said it was the most powerful hurricane to strike the state but expressed relief that it was not as bad as had been forecast – despite 900,000 homes and businesses being left without power along the coast.

“It is clear that we did not sustain and suffer the absolute, catastrophic damage that we thought was likely,” he said.

“But we have sustained a tremendous amount of damage.”

More than 580,000 coastal residents were forced to flee their homes and it is not known when they will be able to return.