Forecasters stressed ‘significant’ uncertainty as to where the storm’s eye would make landfall. 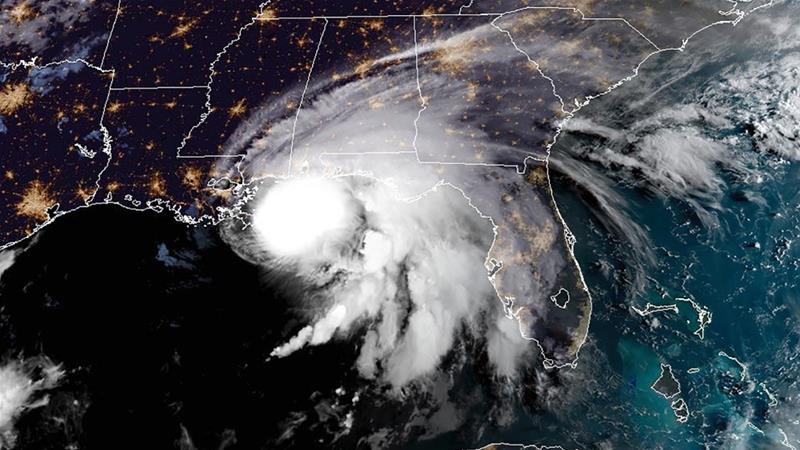 Hurricane Sally, a plodding storm with winds of 137km/h (85mph), crept towards the northern Gulf Coast early Tuesday as forecasters warned of potentially deadly storm surges and flash floods with up to 0.61 metres (two feet) of rain and the possibility of tornadoes.

Forecasters stressed “significant” uncertainty as to where the storm’s eye would make landfall. But they kept nudging the predicted track eastward, easing fears in New Orleans, which was once in Sally’s crosshair.

By early Tuesday, hurricane warnings stretched from the mouth of the Pearl River at the Louisiana-Mississippi line to Navarre, Florida, and forecasters said Sally should reach land near the Alabama-Mississippi state line by late Tuesday or early Wednesday.

Stacy Stewart, a senior specialist with the National Hurricane Center, said Tuesday that people should continue to take the storm seriously since “devastating” rainfall is expected in large areas. People could drown in the flooding, he said.

“This is going to be historic flooding along with the historic rainfall,” Stewart said. “If people live near rivers, small streams and creeks, they need to evacuate and go somewhere else.” 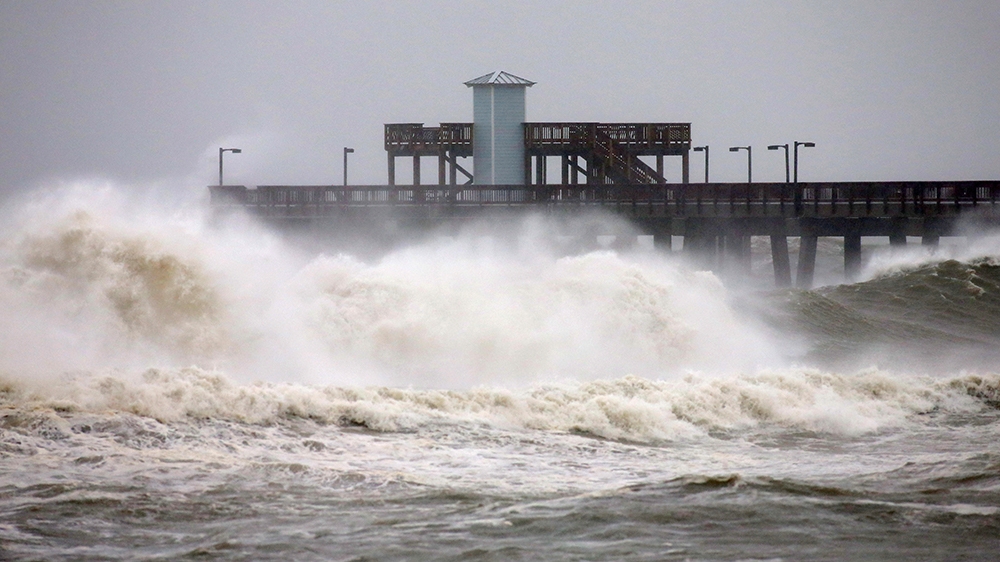 In Gulfport, Mississippi, twin hurricane warning flags flapped in the wind Tuesday morning at a marina and the sea had risen enough to cover an area normally used for bonfires in the sand. Most boat slips at the marina were empty, and many businesses in town were closed, metal storm shutters or plywood covering the windows.

The storm was moving at only 4km/h (2mph) Tuesday morning, centred about 169 kilometres (105 miles) south-southeast of Biloxi, Mississippi, and 105km (65 miles) east of the mouth of the Mississippi River.

Forecasters expect Sally to turn northward Tuesday afternoon, moving near the coast of southeastern Louisiana later in the day, and then travel slowly north-northeastward through Wednesday, remaining a Category-1 hurricane, with top winds of 137km/h (85mph), until it comes ashore.

After making landfall, Sally was forecast to cause flash floods and minor to moderate river flooding across inland portions of Mississippi, Alabama, northern Georgia and the western Carolinas through the rest of the week.

Florida Governor Ron DeSantis declared an emergency in the Panhandle’s westernmost counties, which were being pummeled by rain from Sally’s outer bands early Tuesday. The threat of heavy rain and storm surge was exacerbated by the storm’s slow movement.

President Donald Trump issued emergency declarations for parts of Louisiana, Mississippi and Alabama on Monday, and tweeted that residents should listen to state and local leaders.

Alabama Governor Kay Ivey sought the presidential declaration after the National Weather Service in Mobile, Alabama warned of the increasing likelihood of “dangerous and potentially historic flooding,” with waters rising as much as 2.7 metres (nine feet) above ground in parts of the Mobile metro area. Ivey urged residents Tuesday to stay vigilant and heed any emergency warnings.

It all seemed a distant threat Monday afternoon in Waveland, Mississippi, as a shirtless, barefooted Trevor Claunch, of nearby Bay St Louis, got in some last-minute beach time. But there were signs of trouble coming. Claunch marvelled at how the Gulf waters had already crept over swaths of sandy shore and infiltrated bike paths and parking lots.

“Without any rain, and it’s already all the way up – I honestly want to stick around and see where it goes,” said Claunch.

But he was not taking any chances.

Sally achieved hurricane strength Monday and quickly intensified to a Category-2 storm with 161km/h (100mph) winds. Its maximum sustained winds dwindled to a Category 1 by early Tuesday, and forecasters did not predict further strengthening. 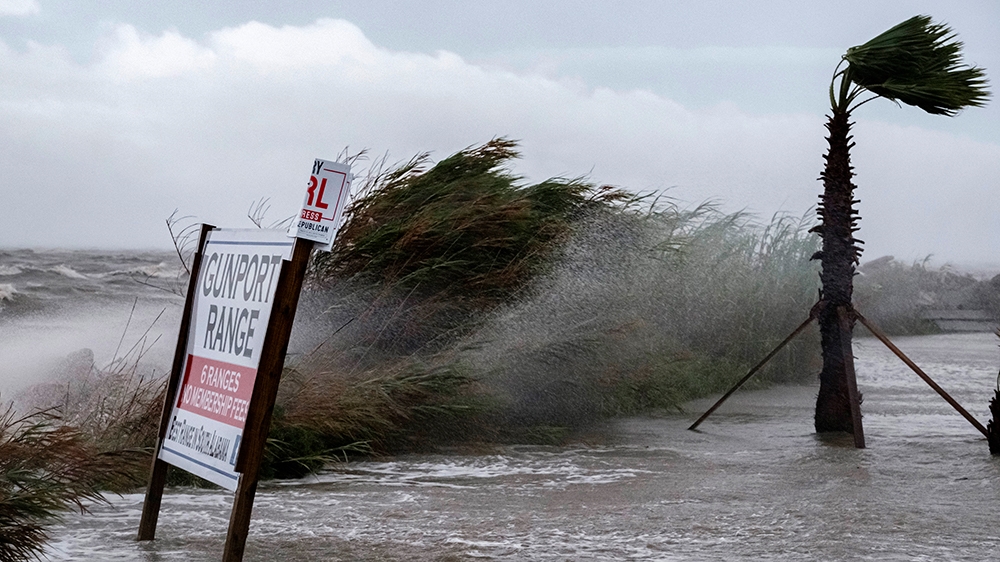 While the threat to Louisiana appeared to be easing, flood control authorities remained on guard, closing gates along networks of waterways that could be pushed over their banks by the possible surge from the Gulf.

The southwestern part of the state was pummeled by Hurricane Laura on August 27 and an estimated 2,000 evacuees from that storm were sheltered in New Orleans, mostly in hotels.

Monday marked only the second time on record, forecasters said, that five tropical cyclones swirled simultaneously in the Atlantic basin. The last time that happened was in 1971. None of the others was expected to threaten the US this week, if at all, and one was downgraded to a low-pressure trough Monday evening. 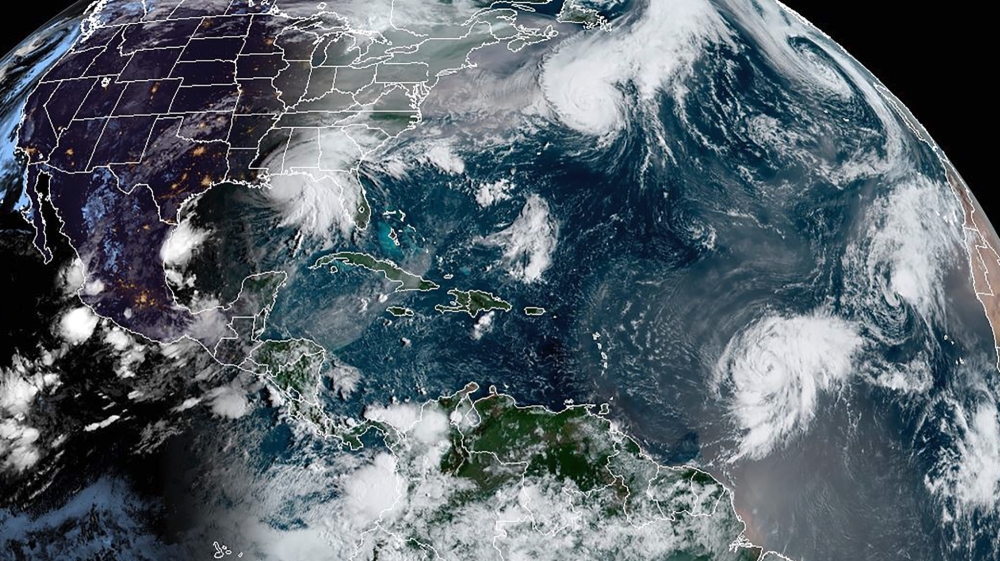 The extraordinarily busy hurricane season – like the catastrophic wildfire season on the West Coast – has focused attention on the role of climate change.

In addition, scientists have been seeing tropical storms and hurricanes slow down once they hit the United States by about 17 percent since 1900, and that gives them the opportunity to unload more rain over one place, as 2017’s Hurricane Harvey did in Houston.

People along the coast appeared to be taking the storm seriously even as it remained offshore. Coastal casinos shut down under orders from the Mississippi Gaming Commission. Motorists filled a convenience store car park in Ocean Springs, Mississippi, as they topped off gas tanks and stocked up on ice, beer and snacks.

“It’s second nature to us. It would have already been done but I had to work,” Zale Stratakos said as she helped her mother, Kimberly Stratakos, fill three plastic gasoline cans. 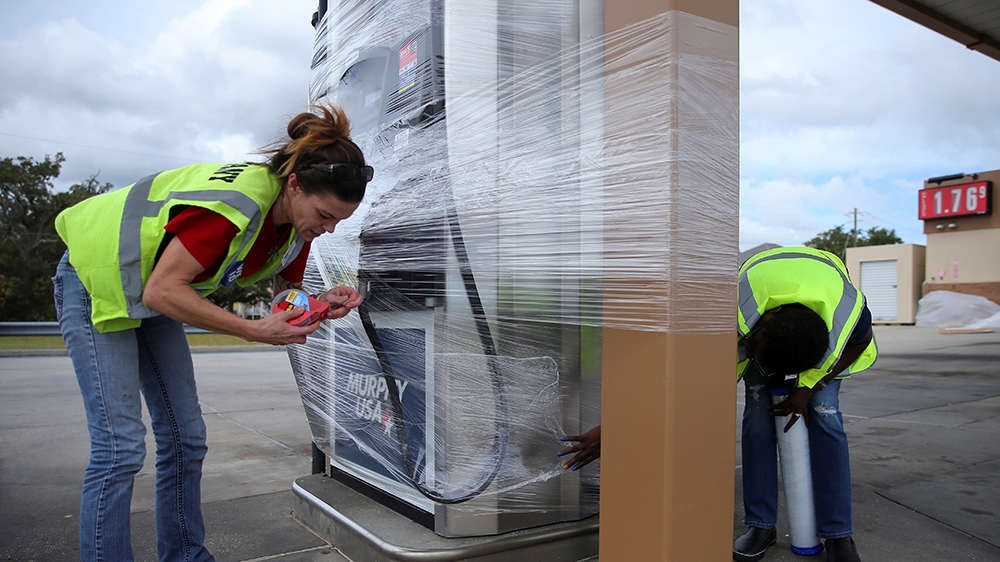