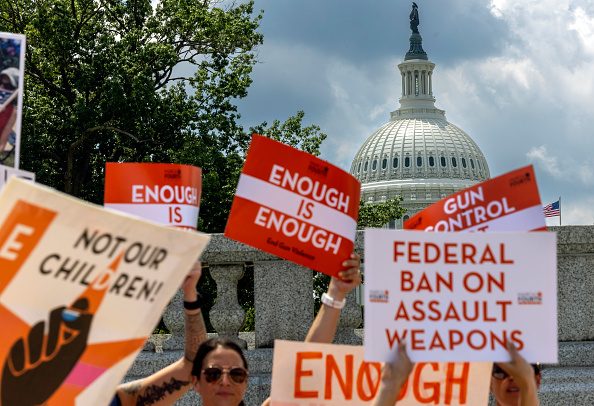 Some of my fondest memories from my youth include hanging out at the shopping mall with friends after high school.

Tysons Corner, one of the largest malls in the District of Columbia, Maryland, Virginia area, was a cornerstone of my childhood. It’s where I did my back-to-school shopping. The restaurant where I celebrated my last birthday, Coastal Flats, is there, too.

I felt comfortable there – up until my family and I were having to run and hide from what we thought was an active shooter.

Even before that, our mall had started to feel unsafe. In June 2022, idyllic childhood memories were stripped away by a shooting at Tysons Corner.

Thankfully, nobody died, but three people were injured in the ensuing chaos. Even 10 miles away from the nation’s capital, my community was not safe.

It took over a month for my family to feel comfortable returning to the mall we visited nearly every weekend.

And some part of me felt guilty about it: the wounds were still fresh, but our collective memory was willing to let it go. This was America’s new normal thanks to relaxed gun control laws and rising gun violence, and we had to get used to it.

In 2022, to date, there have been over 33,000 gun violence deaths, with around 30,000 additional injuries. Carried out over eight months, this equates to about five gun deaths every hour.

As a staple of America’s urban soundscape, gun violence rarely receives the national spotlight unless more than a handful of our community’s mothers, fathers, daughters, and sons are annihilated at once.

Though gun violence constitutes a shared and constant anxiety, the tide of trauma washing over affected communities does not quickly recede.

One Sunday afternoon back in August, I was back at Tysons Corner, sitting at a café with my parents. We were mid-conversation when we heard ear-splitting mayhem. I traced the screams to the second floor, with customers barreling toward the exits. Not again.

Mom and Dad were already screaming at me to run. We knew exactly what this stampede was.

‘You better run, better run, outrun my gun,’ the lyrics from Foster the People’s American classic Pumped Up Kicks spiralled in my head.

In the chaos, I lost both parents—no time to regroup. Bodies were scattering in all directions, some dropping with a thud.

Did our nation’s founders really envision a state of perpetual fear?

An elderly man face-planted on the tiled floor. He extended an arm, crying for help. Shoppers ran around him.

Remembering the school shooter drills from high school, I zigzagged through the mall corridors, looking back only once to locate my parents.

Bursting outside, I took in the fresh air, pierced by the screams of lost children and horror-stricken families. I called my mom.

Finally answering, she screamed directions to regroup. I sprinted to the car, hugged my parents, and burst into tears.

We were one of the first to leave, but cars behind us became gridlocked in a mass exodus. Inching away, we saw crowds expanding outside the mall. We rolled down our windows, making gun signs with our hands and pointing at the mall to deter incoming traffic.

At home, we read the news reports. After the mall locked down, police discovered that ‘bullet’ noises came from a falling light fixture. That seemingly mundane event was enough to set the entire mall into a state of mass hysteria, with trauma from the shooting here just months before priming us for the worst.

My community, and all communities in the U.S., will never be comfortable

Did our nation’s founders really envision a state of perpetual fear? Is this really the land of the free and the home of the brave? Do we need to be brave against our fellow gun-toting citizens?

My community, and all communities in the U.S., will never be comfortable. Any sudden noise is assumed to be a mass casualty event.

Fireworks were mistaken for gunfire during a fourth of July concert in Philadelphia. As was a glass door breaking in a hotel in Las Vegas. Confetti cannons in a mall in Oklahoma City. Balloons popping in a Vegas casino.

With rising gun violence nationwide, America must decide between adopting common-sense gun control laws or continuing to make every public space—from kindergartens to concerts to malls — a space of total war.

We still visit Tysons Corner, albeit less often than before, because the threat of immediate execution looms everywhere we go. Though this space is now marked with trauma, so is every public venue.

Gun violence does not just destroy the lives of those who have their lives brutally stolen, but it also leaves their communities, both immediate and virtual, shrouded in a bloody shadow.

When we arm for war, we are at war. We live in a country where the worst, far from inevitable, happens every hour of every day of every year. With absolute freedom comes absolute tyranny.

America is on edge, and we’re dying of our freedom.

This piece was co-authored by Simar Singh Bajaj. You can find Cameron here.