A powerful storm brought high winds and blizzard conditions to parts of the Midwest on Thursday and into Friday, forcing rescuers to brave snow, ice and bitter cold by air, lake and land to save dozens of people from mishaps and crashes.

The storm capped a bad week for winter weather in the United States. The Northeast has been digging out of record-breaking snow accumulations, and bitter cold is forecast for the weekend. Throughout Iowa, stranded cars and trucks were entangled in a snowy mess on roads. And in Wisconsin, dozens of people who were ice fishing needed to be rescued from ice floes in Lake Michigan. 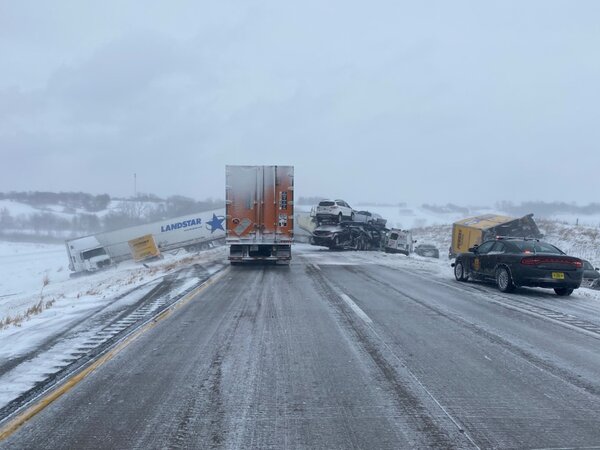 Weather forecasts showed more bitter conditions on the way. In parts of the Upper Midwest and Great Lakes, temperatures are expected to plummet over the weekend to below zero in some parts.

Hundreds of accidents in Iowa

Despite officials’ warnings to commuters to stay inside and out of the winter storm, the Iowa State Patrol said it responded to calls for help at 195 crashes and 169 damaged properties from early Thursday morning to early Friday. There were at least 25 reports of injuries, and one unidentified man was killed.

The State Patrol told drivers not to travel east from Des Moines using the I-80 highway, saying that crashes had shut down the road.

The pileup of cars and jackknifed tractor-trailers had a cascade effect. Feeder roads that were used as detours eventually became blocked with further crashes, said Craig Bargfrede, the winter operations administrator at the Iowa Department of Transportation.

The largest of the crashes was in the central and eastern part of the state: a 40-vehicle pileup that stretched about two miles west of the town of Newton on Interstate 80, Mr. Bargfrede said.

“We also saw a number of vehicles where motorists got stranded in cars in the ditch in low visibility and winds,” he said.

The reason, he said, was a perfect storm of very fast-moving, deteriorating weather. The front came through on Thursday morning, affecting Northwest Iowa, and moved quickly across the state with a line of freezing rain. Temperatures dropped significantly. The rain changed to snow. “Then we got a flash freeze, where all of that precipitation froze to the pavement, creating slick conditions,” he said.

Then the winds picked up, making it hard to treat roads with brine or sodium chloride. “The wind blows it around a lot, and it ends up in areas it is not needed,” he said. “It had to be ranked up there as one of the most difficult days we saw across the state in quite a while.”

The fatal case took place on Highway 20 in Northern Iowa, involving eight trucks and four passenger vehicles. The man who was killed was in one of the trucks involved in the crash.

Even state troopers faced problems with the weather, said Sgt. Alex Dinkla, a spokesman for the State Patrol. Two state troopers, who were trying to help a truck driver who was pinned, had to run into a ditch to flee a chain-reaction crash that hit their patrol cars, he said.

Sixty-six people were rescued from three ice floes that broke off from shore on Lake Michigan on Thursday. Lt. Phillip Gurtler, a spokesman for the Ninth Coast Guard District Great Lakes, said that ice that had been clinging to the shores of the mouth of Sturgeon Bay broke free, possibly from high winds disturbing the water.

The ice floes drifted deeper into Lake Michigan, one going as far out as nearly two miles offshore, and took the anglers with them. About 30 anglers were stranded on one of the floes, he said. “They were rather large,” Lieutenant Gurtler said of the floes.

Some of the anglers called 911 at about 9 a.m. local time. Within four hours, rescuers from the Coast Guard, the Department of Natural Resources, and other state and county agencies had plucked the anglers off the floes, using helicopters, air boats and ice-breakers. There were no injuries.

Lieutenant Gurtler said he was reminded of a Coast Guard saying: “There is no safe ice. Just safer ice.”

Ice disengaging from the shore can be “something natural that happens,” he said, listing wind-driven currents as one possible cause. Though the weather was good during the rescue, conditions “could have been the straw that broke the camel’s back if the ice had been weakened.”

Weather conditions can weaken sections of ice, or people can, for instance, by drilling holes too close together or driving their vehicles on the ice, which was not the case on Thursday.

Wisconsin’s ice fishing community is tightly knit, with a long tradition of ice angling. People pitch tents on the ice or build shacks, dipping lines into the water for perch, smallmouth bass or sturgeon. As soon as people heard about the floes, many went to the shoreline ice to remove their stashed gear, in case other pieces broke free.

“I am sure there were probably a lot of people disappointed their ice shacks were still out on the floes,” he said.

Digging out of snow and bracing for more cold

The Northeast is shoveling out of its recent snowstorm that left New York City with 17 inches of snow this week, the biggest since the record-setting blizzard of 2016 that dumped 27.5 inches of snow on Central Park. This week’s storm also pummeled other parts of the Northeast, like Bloomingdale, N.J., where the snow totaled 26.2 inches.

Tim Gross, a meteorologist at the National Weather Service in Davenport, Iowa, said an arctic front, which started in Cedar Rapids and blew through the region, also affected Northwestern Illinois. “It went through the entire area,” he said. Temperatures dropped more than 10 degrees within hours, reaching 20 degrees with wind gusts of over 40 miles per hour.

Snow was not really the problem: In eastern and central Iowa, the totals were from three inches to five inches. But conditions were bad enough that airports in the Chicago area canceled hundreds of flights.

This weekend, more cold weather is in the forecast.

“In the entire Midwest, we will have temperatures in the single digits, above and below zero,” Mr. Gross said, referring to Iowa, Illinois, Minnesota, Wisconsin and Northern Illinois. “And factor in the wind chill, we are looking at between 20 and 30 below.”