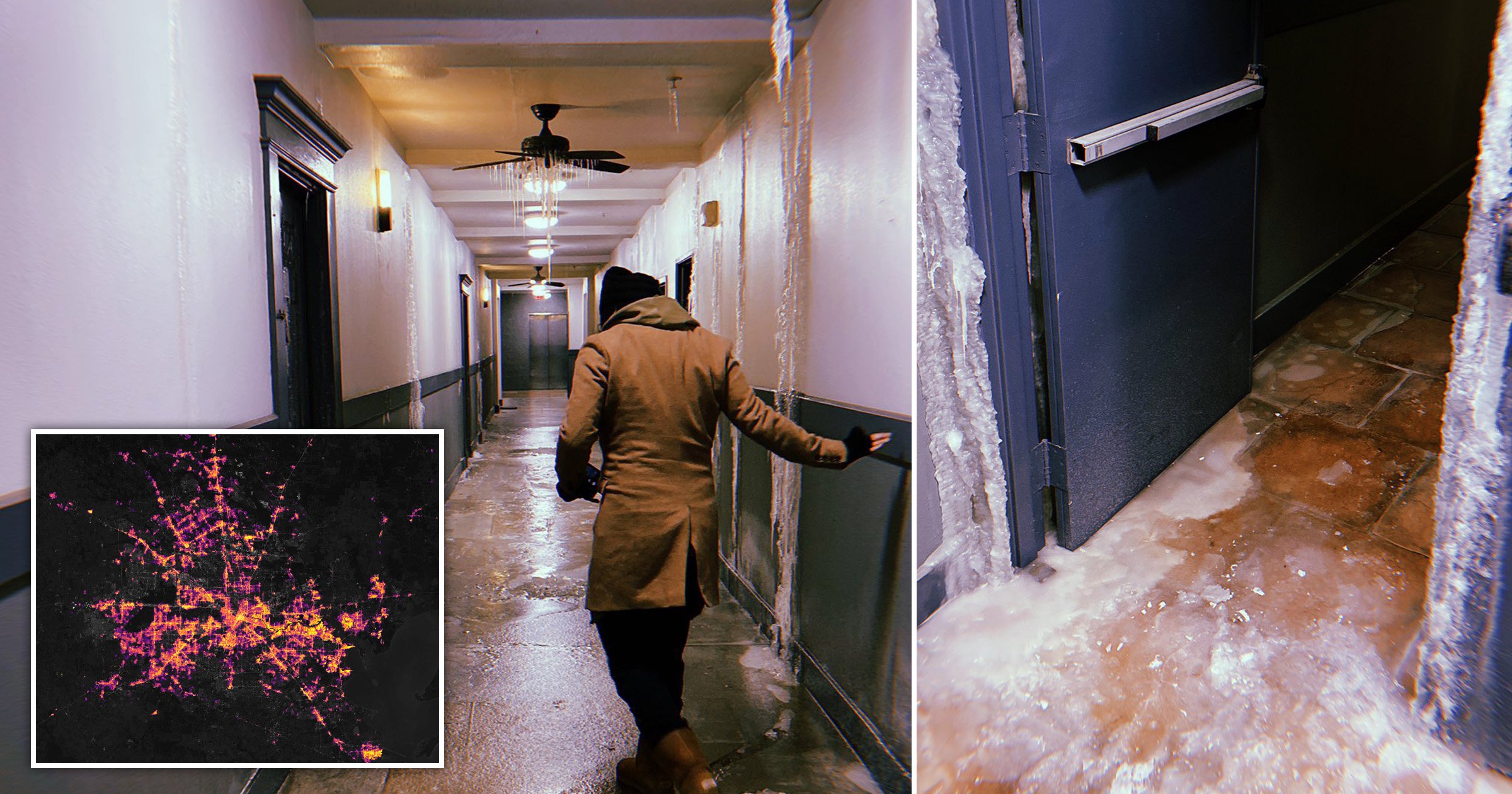 More than three million people are still without power for a fourth day as severe ice and snow blasts Texas.

Gruelling weather conditions have left drivers struggling in the Arctic blast while operators attempt to restore power to the state, which runs off its own power grid.

Footage taken by professional storm chaser Charles Peek shows cars on the Texas side of Stateline Road dealing with the snow – while those on the Arkansas side drive on clear lanes.

Sharing the image Peek tweeted: ‘Big difference in #Arkansas and #Texas snow removal in #Texarkana’, a city that straddles both states.

His colleague Mike Seidel wrote: ‘Can you guess what state has snow plows? It’s the AR side of State Line Ave. that’s clear. The TX side is #snow covered.’

As temperatures drop below zero for another night, infrared images taken from space show just how far the blackouts have stretched.

Conditions have become so difficult some Texans have even taken pictures of ice inside their homes.

Some seven million people are also under notices to boil their water after the Arctic weather compromised water filtration systems.

The majority of the outages have been caused by forced shutdowns from energy agency the Electric Reliability Council of Texas (ERCOT).

Officials said the equipment at the power plants could not handle the extremely low temperatures, so staff had to either stop providing power to customers or risk a total collapse of the grid.

ERCOT, which is technically a non-profit, manages the state’s power grid which has been independent from the rest of the country for as long as electricity has existed.

The CEO of ERCOT, Bill Magness, said on Tuesday night he had ‘no idea’ when power would be restored – but an ‘even bigger catastrophe’ was avoided by switching the power off.

Texas governor Greg Abbott yesterday called ERCOT ‘opaque’ and ‘not transparent’ for not giving more clarity on when power would be returned.

He told the state’s natural gas producers to sell the fuel to in-state power generators.

There has been outrage from Texans as they want to know why back-up infrastructure hadn’t been prepared – particularly after a similar storm in 2011 caused the same problems.

Jeff Dennis, managing director of Advanced Energy Economy, said: ‘Where did those recommendations go, and how were they implemented? Those are going to be some pretty key questions.’

Apparently not all of the generators in the state were upgraded after 2011 to tackle the issue, according to the Texas Tribune.

The energy system was supposed to be ‘winterised’ but this has been put off as the changes are expensive. Critics claim Texas’ deregulated energy market gives little financial incentives for operators to prepare for rare instances of extremely cold weather.

David Tuttle, a research associate with the Energy Institute at the University of Texas at Austin, said in a recent podcast: ‘There are things that can be done, but it will cost some money.

‘About every decade we have these long-sustained periods. And then, you know weatherisation is supposed to happen, and then, it doesn’t because it costs money.’

An ERCOT official, Dan Woodfin, said upgrades made after 2011 prevented the issues becoming worse in a similar cold snap in 2018, but claimed this week’s weather was ‘more extreme’.

Experts believe restarting the frozen oil wells in Texas will be difficult even after power is restored, as output has plummeted by 65%.