The camouflage fatigues are somewhat incongruous on the lush lawns of the Texas State Capitol.

Fully-armoured and heavily-armed, members of law enforcement lounge on park benches and stroll in the warm winter sunshine among the memorials to the military heroes past.

There were no angry protesters for them to confront. Not yet anyway.

But the increased security presence at the Capitol in Austin reflects a nervous national mood with protests threatened here and at similar legislative buildings across the country leading up to the inauguration.

A small gathering of armed protesters had turned up at the Texas Capitol on Tuesday and peacefully made their point. Security was ramped up the following day.

But the military imagery at a building that should be a symbol of civilian democracy is an alarming statement of the febrile atmosphere in America.

Against that backdrop, one of the top Republicans in the state is not in a mood to lower the tension. “Without doubt we are now in what I call an ideological civil war,” said Allen West.

As a Lieutenant Colonel in the US Army, West saw service in Iraq before becoming a congressman and firebrand pundit on the Fox News Channel. He is now chairman of the Texas Republican Party.

Impeachment, not the protests, represents the biggest threat to America, he says.

“It is a very divisive thing to do and I think it is a very vindictive thing to do. It’s not going to help heal this country. What it looks like is taking a punitive action against a person because you hate them.” 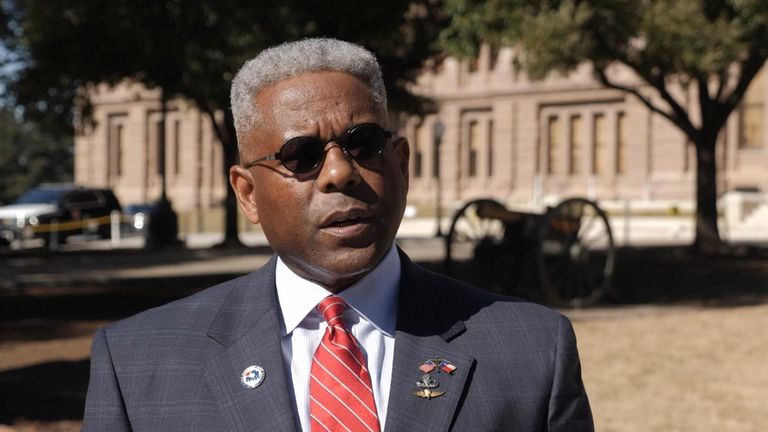 It is a view shared by the Trump supporters taking a tour of the historic site of the siege of The Alamo, seventy miles away from Austin in San Antonio. The 13-day battle between Texan independence fighters and Mexican forces in 1836 has become a byword for defiance.

“I’m hoping that it doesn’t get violent,” said dad Schyler Edwards, “but the way they keep pushing things that don’t make sense, it seems like they’re doing it just to p**s off Americans, just to dig the knife deeper and twist it.”

Back at the state Capitol in Austin, the lone protester at the gates was no fan of the outgoing president.

He paced up and down with an effigy of a child-like Trump on his shoulder. On the dummy’s orange t-shirt just one word: “Jail”