PARADISE, Calif. — Has anyone heard from Billy? Susan? Betty?

Their friends at the Ridgewood Mobile Home Park want to know.

Four days after a blaze called the Camp Fire ripped through the small town of Paradise, the sheriff’s office said that more than 200 residents are still missing. It is a staggering number in a place that as of Monday night had lost at least 42 people in what is now the deadliest and most destructive wildfire in state history.

When asked about his team’s progress in the search, Sheriff Kory Honea of Butte County said simply, “We have a lot of work to do.”

Among the missing are many older residents of the mobile home park, a close-knit retirement community of 97 pastel-colored homes, where residents were so tightly bound that they ate together, took walks together and often prayed together, bowing their heads at the mailbox, or in the middle of the street, when they heard of another’s misfortune. Just 20 or so of those people are accounted for by the park’s owner, Glen Fuller.

[Follow live updates on the fires from our reporters on the ground here.]

The Camp Fire, which erupted in Northern California on Thursday, has already burned through 117,000 acres of land. As of late Monday it was just 30 percent contained. 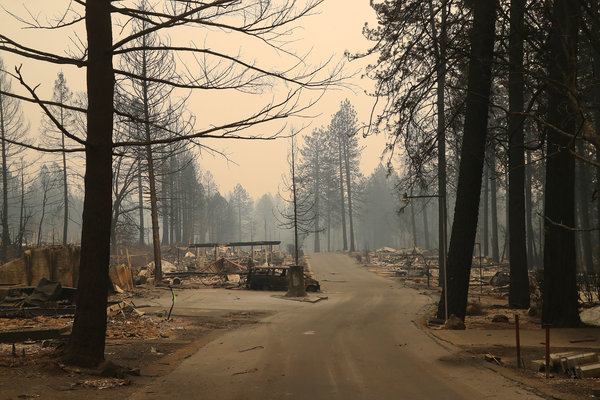 Ridgewood was flattened by the fire, a remarkable feat of destruction even for a blaze defined by its speed and brutality. Because the fire came from the east — the park sits east of downtown — it is likely that the people of Ridgewood were among the first to be hit by the flames. Compounding the danger, many of the residents were older, making a hasty escape difficult.

This means that those who did make it out — chased by the sound of exploding propane tanks — have been left to wait for news of the people they cared for most.

“It’s awful. It’s just awful,” said Sheila Schriber Cox, 64, a retired family counselor who fled with her dog Daisy, leaving behind her walker, her oxygen tank and a stack of Bibles she’d meant to distribute.

She mentioned Betty, of Lot 127, a fellow Baptist churchgoer with a Labrador named Duck, who she had not seen since Thursday. “I loved her,” Ms. Schriber Cox said. “And I don’t know if I’ll ever see her again.”

On Monday, little remained of the park, save for ashes and a stone Bambi guarding the entrance. Kitchen tables had melted to the ground, rose gardens had turned to ash.

Ridgewood was built in the 1960s and 1970s, and it quickly became a sanctuary for retirees from all over the country who were looking to live on a ridge amid the pines. Mr. Fuller took it over in 1996. By 2018, the neighbors had grown close, taking their dogs out for walks at 5 p.m., and stopping in Bob Wedman’s garage to marvel at his latest cabinet project. When the fire hit, at least one new romance was blossoming. Many neighbors bonded over their shared love of church.

The group was also getting older. At least one resident was deaf, another was blind. Several used walkers. Others had no cars. Still others didn’t own cellphones, doing just fine with their landlines. By Thursday morning, when the husband-wife manager team began banging on doors to tell people to evacuate, “so many people were just not aware of the fire,” Mr. Fuller said.

Mr. Wedman, 82, a 21-year Air Force veteran, was readying to leave his home at Lot 40, placing his valuables in his car. Then he noticed his house was on fire and flames were shooting up the skinny pines. The blaze suddenly sounded like a jet engine. “I just left with the clothes on my back.”

“I’m coping with it pretty good,” he said, speaking from the nursing home where he is bunking with his wife Ruth, a resident with an Alzheimer’s-like condition.

Others at Ridgewood were not so lucky.

On Monday, as white ash swirled around the neighborhood, a recovery team pulled a body from the rubble. A second team searched for the remains of others.

This has been particularly difficult for Ms. Schriber Cox of Lot 126. She moved to the Paradise area in 1991 after fleeing an abusive relationship.

She purchased her three-bedroom, two-bathroom modular home in Ridgewood in 2010 for $35,000, sometimes hosting community Thanksgiving.

But she lives on just $900 a month, and was never able to afford fire insurance. “I basically lost everything,” she said, speaking from her daughter’s home in the Bay Area, where she can stay for now.

At Ridgewood, Ms. Schriber Cox liked to be social, and she rattled off the names of the friends she had yet to hear from: Clay and Mary. Elaine who went to the Nazarene church. Dot. Lee and Patty. And then there was Billy, an older woman without a car whom she had last seen about two days before the fire, walking with her cane, all bundled up despite the heat.

She worried the most about Billy, and others who might not have been quick enough to leave. “I just hope to God that Billy got out.”

[Those who did escape the wildfires spoke of harrowing close calls.]

The search for the missing — for friends, family and investigators — has been complicated by the fact that some residents did not have cellphones. Mr. Fuller said this was in part because the community did not have very good service, though it had improved a bit in recent years.

Mr. Fuller said he knew people moved to Ridgewood to make a home amid the trees. But ultimately the trees that made the park so beautiful were also its biggest problem.

“It was such a gorgeous place to live,” Mr. Fuller said.