COLLEGE STATION, Texas — Moments after a high-rise condominium building in Surfside, Fla., was nearly leveled in a devastating collapse late last month, emergency workers began sifting through concrete and twisted metal for any sign of survivors.

Their urgent mission was not a haphazard scouring of the debris, but a carefully orchestrated plan learned after specialized training in urban search and rescue operations. Many of the men and women working around the clock in Florida first spent hours practicing for similar situations in Disaster City, Texas, a one-of-a-kind instructional facility that includes debris from real-world disasters.

There, on a sprawling 52-acre center operated by the Texas A&M Engineering Extension Service near the flagship campus in College Station, rescue workers learn how to listen for the muffled sounds of survivors, safely lift debris and dig passageways to reach them.

A visit to the training facility last week offered a window into the delicate balance that rescue workers face as they search for survivors amid teetering, often unsafe structures and in grim piles of concrete, steel and personal items. The operation at the Champlain Towers South in Surfside has drawn comparisons to the recovery efforts after the Sept. 11 attacks at the World Trade Center and the Pentagon and the bombing of the Alfred P. Murrah Federal Building in Oklahoma City in 1995.

“It takes specialized equipment, specialized training and specialized people — it takes those three things to do this kind of response,” said Paul Gunnels, the rescue program director at the Texas A&M Engineering Extension Service. “When you talk about heavy rescue, it takes a little bit of time to get everything in there.” 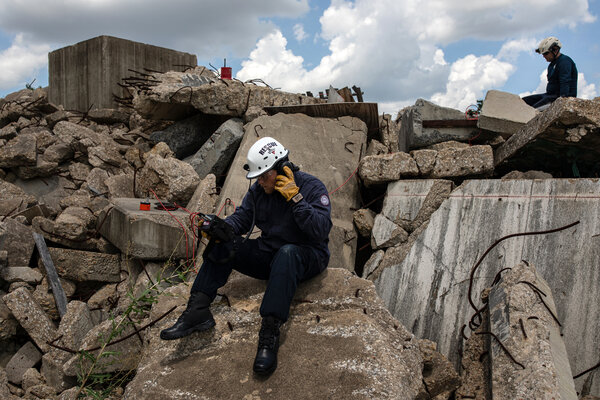 Elite rescue teams from across America and the globe have traveled to the site to train for delicate rescue missions like the operation in Surfside, where the partial collapse of the condo building nearly two weeks ago was among the deadliest disasters of its kind in the United States. At least 32 people, including several children, have been recovered from the site, and more than 100 remain missing.

In Disaster City, emergency workers, including rescuers with the Federal Emergency Management Agency, train in structures that were modeled after real-life events, officials said, including the Oklahoma City bombing and the Mexico City earthquake of 1985, which killed thousands.

During a routine exercise last week, Matt Winn, a logistics foreman at the center, surgically inserted a search camera the shape of a long stick in the direction of a voice, which came from a crevice in a summit of rubble. A video screen the size of an iPad revealed what appeared to be a man caught under a mountain of concrete.

The man, a fellow Disaster City expert, soon emerged from a fabricated tunnel. Though the rubble might look dangerous, the scenes at the site were carefully engineered for everyone’s safety, Mr. Winn said.

Standing nearby, Mr. Gunnels, his supervisor, said that a real-life scenario might have proved a lot more challenging.

Once someone is found, he said, rescue leaders must triage the structure and evaluate the safest route. Every single step, often literally, is carefully considered. Stepping on a shaky piece of concrete can very quickly further destabilize what remains of the structure and endanger both the victims and rescuers, Mr. Gunnels said.

Training here, he added, is a fluid road map — and not a script. Rescue leaders must also closely study weather conditions, such as rain and wind, which can alter rescue efforts, as was the case in the first several days in Surfside, as thunder, lightning and heavy rain threatened the site, and over the weekend as officials prepared for possible landfall of Tropical Storm Elsa.

With the precision of a mountain climber, Mr. Gunnels stepped carefully on a heap of debris the equivalent of a three-story building. He eyed the pieces of concrete, as large as a wall and as small as a baseball glove, and twisted rebar and explained his options.

First, he said, there is a listening device, a technologically advanced system akin to a game of telephone that can capture the sounds of someone breathing, moving slowly under debris or calling out for help. (Sounds are often muffled under large piles of rubble.)

Then there is the airbag, an inflatable cushion that can lift heavy pieces of concrete, not unlike a superpowered fictional character. Rescue workers follow this step by stacking pieces of wood on top of each other, a process known as cribbing, that allows them to create a tunnel to get to victims.

Other times, a 50-pound four-legged rescuer is everyone’s best bet. On this day last week, Matt Young, an instructor, called on an 8-year-old mixed-breed Labrador named Zapp, who jumped over the pile and followed the scent of human skin that had been placed under the rocks. It took him seconds to locate it, to cheers and calls of “Good Boy!” from Mr. Young.

Disaster City was created in 1998 with a $70 million grant from the Department of Justice. These days, a majority of training costs are self-funded with enrollment tuition, he said.

Over time, it has grown to include scenarios from past tragedies. In one section, a large slab of concrete is collapsed on the side of a parking lot, where mangled cars look as if they were chewed up by monstrous rubble. Trainees must figure out a way to secure it so that they can enter the ruins and locate volunteers acting as trapped victims, not unlike what rescue workers did at the Alfred P. Murrah Federal Building in the aftermath of the Oklahoma City bombing.

At the entrance, visitors are welcomed by a sign that reads “Disaster City” next to a cluster of battered trains, some of which were donated after enduring their own disasters. With street names like Disaster Drive and Rescue Drive, the site has elements of an urban area or a movie set.

The larger center, known as Emergency Services Training Institute, includes firefighting, incident command and hazardous-materials simulations and trains about 120,000 students a year, both online and in person, many of them emergency responders seeking to expand their skills, such as how to create tunnels under piles of concrete and to control massive fires.

Walking around the simulations often takes Mr. Gunnels, a former firefighter, back to some of the nearly 30 disasters he has responded to, including the World Trade Center and a devastating bonfire collapse that killed 12 people in College Station more than two decades ago.

Last week, Mr. Gunnels was careful to not address the continuing rescue efforts in Florida. But he said he understood how painful it must be for the families who probably feel as if the operation was taking too long.

His mind traveled back to 1999, when as a lieutenant for a local fire department, he rushed to the scene of the bonfire and made contact with the last person found alive under the heavy pieces of logs. Every disaster is different, he said, but they all require patience from both the people trapped and their anxious relatives waiting on the sidelines.

He said, for example, that it took more than eight hours to free the last survivor, John Comstock, in the bonfire collapse. He recalled vividly sticking his head where Mr. Comstock was and offering both hope and a warning. “Sir, you are going to have to mentally prepare yourself,” he said he told him. “You are going to be here a long time.”

“You learn that there are things out of your control,” Mr. Gunnels said. “And I have to do it the best I can.”