MANAGUA, Nicaragua — A life on the run was not one any of these Nicaraguans ever intended.

But many people in this desperately poor Central American nation now live in a bleak new reality. They have exchanged their routine lives as lawyers, engineering majors, radio broadcasters and merchants for one of ever-changing safe houses, encrypted messaging apps and pseudonyms.

Eight months after a spontaneous popular uprising left 322 people dead and 565 others in jail, Nicaraguans from cities across the country have gone underground.

They are hiding from an increasingly authoritarian state that is methodically tracking down those who participated in the large-scale and often violent protests against the government of President Daniel Ortega and his wife, Vice President Rosario Murillo.

“They are hunting us like deer,” said Roberto Carlos Membreño Briceño, 31, a former legal clerk for a Nicaraguan Supreme Court justice, who gave up his law license and fled this year after his bosses saw a photo of him at a protest. He now lives in hiding on a ranch in Costa Rica with 50 strangers, including a ballet dancer who goes by code name “The Eagle.”

When hundreds of thousands of people took to the streets in cities around Nicaragua to demand the president’s immediate ouster this spring, many observers thought that Mr. Ortega’s days in office were numbered. 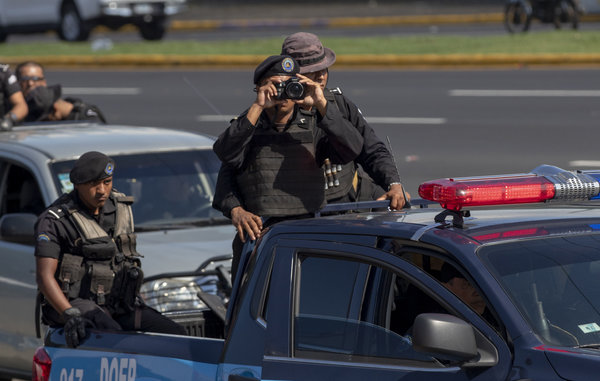 Instead, convinced that he was facing an attempted coup by well-financed political parties, Mr. Ortega responded with an increasingly brutal and repressive strategy to quell the opposition movement and has tightened his grip on his power.

Now, nearly 40 years after the leftist Sandinista Front led by Mr. Ortega ousted the Somoza dynasty that had ruled Nicaragua for decades, he is accused of becoming the very dictator he helped depose all those years ago.

The 73-year-old Mr. Ortega and his wife, 67, control virtually every aspect of government, including the National Assembly, the Supreme Court, the armed forces, the judiciary, the police and the prosecutor’s office. The many Ortega adult children manage everything from gasoline distribution to television stations.

The protesters who once had such high hopes of forcing Mr. Ortega to step down after nearly 12 years in the presidency are reduced to recording subversive videos calling for his ouster while wearing T-shirts over their faces.

Hundreds of civilians who never picked up a weapon or lit a match have been charged with terrorism-related crimes under a new law that broadened the definition of terrorism.

In the past few days alone, the government shut down a popular television station, jailed its news director and expelled international human rights observers. Private gas stations that had participated in strikes were shuttered. The police raided the offices of the country’s leading human rights organization and seized its computers.

“Our field work demonstrated that crimes against humanity are underway,” said Paulo Abrão, the executive secretary of the Inter-American Commission on Human Rights, who was among the international monitors expelled from the country on Thursday.

While Mr. Ortega’s crackdown has managed to silence the dissent for now, mounting international pressure and a plummeting economy — marked by the loss of hundreds of thousands of jobs since the uprising began — could pose significant challenges to his power over the months ahead.

Those in the opposition fear that this tightening economic noose could result in increasingly desperate acts as Mr. Ortega fights for his political life.

Carlos Fernando Chamorro, a journalist whose newsroom was raided and padlocked by the police this month, said he was “absolutely convinced that this movement is irreversible,” referring to the push to oust the Ortega government. “But what worries me is: How many people is Ortega going to kill before the police say, ‘We can’t keep killing people?’”

The protests began in April as the government tried to enact social security reforms that would have cut benefits and increased taxpayer contributions.

When the elderly people who would see their pensions reduced picketed in Managua, the capital, pro-government mobs attacked them. The college students who rushed to support the protesters were assaulted, and some were killed.

“They didn’t come to injure us,” said a former college student who goes by the name “La China” and now lives in hiding. “They came to kill us.”

The surge of social unrest quickly spread to other cities as the social security measure became an unexpected detonator of a monthslong campaign to end Mr. Ortega’s rule. He returned to the presidency in 2007, after heading the country from 1979 to 1990.

University students took over college campuses, and masked residents armed with homemade mortars and other weapons set up road blocks around the country that paralyzed commerce. Some protesters set fire to government buildings and burned cars, while the police responded with deadly force against even unarmed groups of protesters, human rights observers say.

At an enormous march on May 30, Mother’s Day in Nicaragua, more than a dozen people were killed by snipers.

The Nicaraguan Center for Human Rights said it had logged 322 killings since the April rebellion began, including 22 police officers and around 50 people associated with the government. Two dozen of the victims were minors, and 14 of the survivors were blinded by snipers who fired rubber bullets, said Vilma Núñez, the organization’s president.

Officially, the organization no longer exists: The National Assembly eliminated the legal status for her group and six others accused of financing or plotting a coup.

Ms. Núnez, a former Sandinista who was held as a political prisoner in 1970s, said the repression Nicaraguans are experiencing today was far worse than anything the Somozas did. Her organization took reports from activists who said they had been sexually assaulted with bayonets. In the first days after the protests, men were stripped naked and tortured, and were then released barefoot with shaved heads.

The government’s response to the protests came in four stages, starting with a crackdown using a mix of police and paramilitary forces. Next, in July, it began “operation cleanup” to sweep the streets of roadblocks. Even churches were attacked. Then came arbitrary detentions. Finally, there was the criminalization of dissent.

Rallies now require a permit, which no antigovernment group receives. People are afraid to carry the flag or sing the national anthem for fear of being viewed as a subversive.

Experts estimate that 60,000 people have fled, with more than 23,000 of them seeking refugee protection in Costa Rica.

On Friday, the Interdisciplinary Group of Independent Experts, a working group assembled by the Organization of American States, issued a harsh synopsis of the government campaign, concluding that the repression was so widespread and prolonged that it could only have been ordered by Mr. Ortega himself.

On Thursday, before the O.A.S. observers released their investigative report, the government kicked them out, saying they were operating under the direction of the Trump administration.

“Despite much evidence of the violent nature of the supposed peaceful protests, the existence of police and citizens who were assassinated with high-caliber fire arms, the Inter-American Court of Human Rights characterized said protests as peaceful,” said Denis Moncada Colindres, Nicaragua’s foreign minister, reading from a statement.

The Ortega administration channels all media requests through the office of the vice president, which did not respond to repeated requests for interviews. In past communiqués, Ms. Murillo described the protesters as petty criminals and gang members who were financed by right-wing political parties.

The O.A.S. observers found that of the 109 killings that took place in the first six weeks of the uprising, only nine criminal cases were opened. Six of those were related to Sandinistas killed in the violence.

Of the 109 dead, 95 were shot in the head, neck and thorax, which suggested extrajudicial executions. Mobs of men in civilian clothes clearly worked in concert with the police, the investigators said.

At least 1,400 people were hurt, and the number is probably far higher because most people were too afraid to go to public hospitals, where doctors were fired for treating wounded protesters, investigators said.

An analysis of videos posted on social media showed that the government went from using tear gas to rubber bullets, then real bullets and finally military firepower like assault rifles and grenade launchers.

The country’s prosecutor’s office seemed uninterested in investigating and unaware that prosecutors should be independent of the president’s office, said Claudia Paz y Paz, a former Guatemalan attorney general who was among the experts. “Where were the prosecutors?” she asked. “Where were they?”

A group of former college students, now expelled and living in hiding, said that while they acknowledged that the government had succeeded in crushing the protests, the activists continue small activities like singing the national anthem in public, or setting a tire on fire and fleeing.

One safe house visited in Managua was occupied by seven former college students, who passed the time playing Monopoly when they were not glued to their phones in search of updates about recent arrests of their fellow activists. Some have been there for months, without ever going outside.

At a house of Nicaraguan refugees in Costa Rica, dozens of the activists slept on mats on the floor separated by curtains. The protesters vowed not to get too comfortable there: Their fight, they said, remains at home.

“We are in a phase now where massive events cannot be done,” said a student who goes by the name of “José” because he fears that his family will be targeted. “People think it’s over? It’s not over. It’s not going to end.”

He pulled out his phone to read aloud some of the death threats against him on Facebook. Then he pulled a shirt over his face and recorded a video calling for a hunger strike.