A wave of arrests of politicians and civil society leaders on unsubstantiated charges of subversion has left the long-ruling president, Daniel Ortega, running practically unopposed in November’s general elections.

“Ortega has crossed the line,” said Carlos Fernando Chamorro, a prominent Nicaraguan publisher, two of whose close relatives have been detained in the past week. “This is the final blow against political competition.”

Overall, in the past week, the police jailed or put under house arrest four opposition presidential candidates, along with the spouse of one of the candidates, a prominent social activist and a business leader. The crackdown continued on Wednesday, with police arresting another prominent opposition activist, José Pallais.

The U.S. responded to the crackdown by sanctioning four of Mr. Ortega’s officials on Wednesday, including his daughter. Sanctions against dozens of other top Nicaraguan officials in recent years have failed to ease the repression.

Most of the latest political detainees have been held under Nicaragua’s so-called “Guillotine Law,” which since late last year has allowed the government to accuse any citizen of working for foreign powers and fomenting unrest without having to produce evidence.

In another sign of a broadening crackdown, prosecutors have questioned nearly 30 journalists in alleged money-laundering cases in recent weeks, threatening to stifle the last independent media in the country. 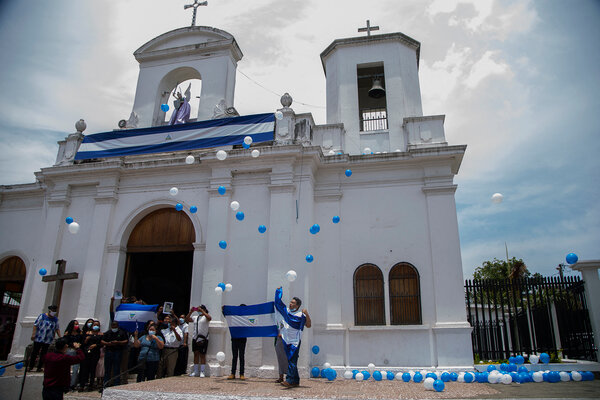 The speed and breadth of the attack on Nicaragua’s last bastions of opposition over the past week has surprised even the opponents of Mr. Ortega, who has steadily dismantled the country’s democratic institutions and suppressed dissent since winning elections in 2006.

The latest arrests have included former allies and officials of Mr. Ortega; three of the detainees had participated in the peace dialogue with the president following the police’s brutal suppression of protests in 2018, which left more than 300 people dead.

The U.S. has reacted strongly to Mr. Ortega’s crackdown, calling for the immediate release of the detained dissidents. Five American congressmen called for “targeted economic and diplomatic” sanctions against Mr. Ortega in a bipartisan statement released Wednesday.

The arrests “should resolve any remaining doubts about Ortega’s credentials as a dictator,” Julie J. Chung, the State Department’s acting assistant secretary for Western Hemisphere affairs, wrote on Twitter on Tuesday. “The international community has no choice but to treat him as such.”

The United Nations Secretary General, António Gutteres, said Wednesday that the arrests undermine confidence in Nicaragua’s elections and called for the release of the detained dissidents.

But the repression in Nicaragua was met with silence from other Central American governments, a sign of the broader slide away from democratic norms in the region.

Only one Nicaraguan opposition movement, Citizens for Liberty, is still legally eligible to register candidates for the November vote. Despite its rapidly shrinking options, the movement has remained defiant.

“With the candidate that’s left, with him we will confront Ortega,” Kitty Monterrey, the president of Citizens of Liberty, said on Monday.