As a third wave of coronavirus infections has begun to take off across much of the country, San Francisco has been a bright spot. After experiencing a surge of cases over the summer, the city has tamped down infections to near their lowest levels since the pandemic began. Restaurants, movie theaters, and museums are open at 25 percent of capacity.

One crucial part of the city, however, remains stubbornly closed: The public schools.

Even as private and parochial schools have begun to reopen their doors, the school district has not set a timeline for resuming in-person instruction, except to say that it is not likely in this calendar year.

The district’s decision to stay closed this fall, even as other urban districts — including New York City, Miami, Washington D.C., and Philadelphia — have opened or set dates for partially reopening, has angered many parents, local health experts and the mayor, London Breed, who does not control the school system.

It has also touched off, in this very politically progressive city, a sharp debate about how best to safely educate low-income and minority students during the pandemic — and over who speaks for the Asian, Latino and Black families who together represent a majority of the district.

That debate is underway in other cities where schools have been slow to reopen. In some places, like Los Angeles and Chicago, school buildings remain closed partly because virus cases remain high in the city. In others, like Oakland, teachers’ unions have said that their members do not want to return to classrooms until there is essentially no local transmission.

The frustration in San Francisco boiled over last month when district administrators told the principals of roughly one-third of the district’s 125 public schools that their communities should start brainstorming new names for their schools, because their current names had historical associations with slavery, genocide, colonization or other injustices. The list included schools named for Abraham Lincoln, George Washington and even the state’s senior U.S. senator, Dianne Feinstein.

The news prompted a scathing statement from Mayor Breed, who said it was offensive for the district to be focusing energy on renaming schools when it has not put forward a plan for reopening them. The district’s 52,000 students have been taking all their classes remotely since school resumed.

“I had had it, honestly,” Ms. Breed said in an interview on Oct. 22. “From my perspective, they weren’t providing clarity about one of the most important things to kids and families in this city.”

While the district was talking about seeking equity by renaming schools, she said, “the achievement gap is growing, and there are kids who live in poverty who are falling behind.”

The president of the Board of Education, Mark Sanchez, said in response that the renaming process was not interfering with preparations to reopen. But the district has said it is far from ready to resume classroom instruction, and Mr. Sanchez and his fellow board members, who are elected, have shown little urgency about getting students back into school buildings.

The teachers’ union has also balked at reopening schools, saying that conditions are not yet safe.

Mr. Sanchez, who is a fourth-grade teacher in a nearby district, has argued that calls for reopening are largely coming from a small group of well-off parents, and has suggested that the district’s poor Black and Latino parents are less eager than the well-off families are to send their children back to school, as has turned out to be the case elsewhere. 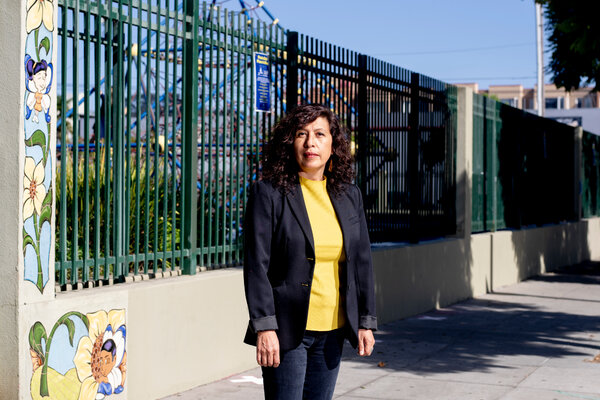 With the schools closed and many families struggling to arrange for child care, the city created a system of community hubs where low-income students can go during the day and be supervised while they engage in distance learning. As of Oct. 28, 1,256 students were enrolled in the hubs, about three-quarters of their capacity of 1,723.

The school board initially responded to the city’s plan for the hubs with suspicion. In a recent interview, Mr. Sanchez asserted that the hubs were not being used to capacity because minority parents do not want their children in classrooms right now.

“I would imagine that families are choosing not to go because they’re afraid,” he said. “These are families that are service industry workers, that come from communities that have a higher rate of infection, who don’t want to put their kids in harm’s way.”

Ms. Breed, who is Black, rejected the idea that families were starkly divided by race on the issue of school reopening. She said her sister called her often to complain about how stressful it was to try to manage her son’s distance learning, and that she had heard from many other families who were impatient for schools to open.

“Let’s not make this about race when we talk about children, because all kids matter,” she said.

The population of San Francisco is 48 percent white, but as of 2019, white students made up only 15 percent of public school enrollment. Thirty-five percent of students were Asian, 27 percent Latino, 7 percent Black and 5 percent Filipino. The rest were American Indian, Pacific Islander, multiracial or declined to state their race.

When the school district surveyed families in early July, nearly 60 percent said they would send their children back either fully in-person or for a hybrid schedule. But white families responded to that survey at a disproportionately high rate.

Dheyanira Calahorrano, a community health worker who lives in the Mission District of the city and has an 11-year-old son in public school, agreed that many Latino families were afraid of catching the virus because a disproportionately large number of the city’s cases and deaths have been Latinos. But she asserted that there were still many Latino families who wanted their children back in classrooms.

Mothers she had spoken to in the Mission District were worried that their children were not making academic progress, and in some cases were developing behavioral problems. Some mothers had decided not to work in order to help their children with distance learning, she said, but many of them were struggling because they spoke only Spanish and were not facile with technology.

“We are suffering an educational crisis,” she said.

Maria Su, executive director of the city’s Department of Children, Youth and Their Families, said that some children who came to the community hubs had not logged in to their online classes since the schools closed in March.

“We have children who are missing 90 assignments, whose parents just cannot help them because of a language barrier,” she said.

Many medical experts in the Bay Area also are frustrated with the district’s failure to reopen. While it is impossible for the foreseeable future to completely eliminate the risk of transmission in schools, they say, the risk is relatively low in areas where the virus is contained, especially in elementary schools, and can be reduced even more by safety measures like mask requirements and good ventilation.

San Francisco currently has 4.7 daily new cases per 100,000 people, a little more than half the rate of new cases in New York City. The share of coronavirus tests coming back positive averaged 0.89 percent for the week ending Oct. 22, lower than New York City’s average of 1.8 percent for that week.

Experts say they are seeing evidence of significant mental and physical problems among children who are out of school, including weight gain and increased rates of depression, anxiety, drug overdoses and suicidal thoughts among adolescents.

Among all children aged 10 to 18 who were treated at the emergency department of UCSF Benioff Children’s Hospital Oakland, across the bay from San Francisco, the percentage who screened positive for suicidal thoughts rose to 16 percent in September from 6 percent in March, according to Dr. Jacqueline Grupp-Phelan, the Chief of Pediatric Emergency Medicine at the University of California San Francisco.

“We really, absolutely, have to consider that the cure might be worse than the disease,” Dr. Grupp-Phelan said.

She and others expressed concern that if San Francisco and other Bay Area districts waited much longer to open schools, coronavirus cases would rise significantly again and make it more difficult to reassure people that it was safe. Cases are in fact already ticking up in California, though the increase in San Francisco so far has been modest.

The district’s answer is that it is not ready to reopen. It recently rolled out a dashboard tracking its progress toward the time when it could welcome back an initial wave of students: pre-kindergartners and some students with disabilities. The district had not yet completed any of nine groups of tasks it had pledged to accomplish before reopening, and was less than halfway done with seven of them.

One hurdle the district faces is setting up a program of surveillance testing for its staff. State guidelines suggest testing all teachers every two months; Mr. Sanchez has said that teachers should be tested every week.

“That’s what the private schools are doing,” he said on Friday. “Why aren’t our teachers worth that?”

In what some irate parents took as a sign of the board’s lack of focus on reopening schools, the discussion of reopening plans at the last board meeting did not begin until five hours into the meeting.

When the Board of Education and the city’s Board of Supervisors held a joint meeting on Oct. 23, two supervisors berated the district for not having set a timeline to reopen.

“We are losing children every day,” said one supervisor, Sandra Lee Fewer, who is Chinese-American. “This lack of urgency is just appalling.”

Dr. Matt Aldrich, the executive medical director of critical care at U.C.S.F., who has two children in the district, said he was disappointed that there had been little discussion among members of the Board of Education about the largely reassuring evidence so far from school reopenings across the country and abroad.

“I think we need to continue to do everything we can to mitigate risk, to be as safe as we possibly can,” Dr. Aldrich said. “But if we say that the only way that we can return to school is to have some plan that seemingly guarantees that there will be zero cases at all, that just strikes me as setting us up to never return this year.”