MCALLEN, Tex. — President Trump was briefed near a county park on the Rio Grande on Thursday on the perils of drugs and violence seeping across the Mexican border. But the river he visited has seen its share of both treachery and normalcy.

Just a few months earlier, a short walk from the spot where Mr. Trump stood, two retired Border Patrol agents had set off from the park in their boat. They were testing a new engine in anticipation of a fishing trip. They cracked open some Bud Lights, but the engine died while they were on the water, and on-duty Border Patrol agents, old friends of the guys in the boat, sped out on the river to give them a tow.

There were no migrants apprehended, no heroin seizures. It was just one ordinary, leisurely moment on a border that hums with a continuing stream of migrants — and the easy rhythms of day-to-day life — amid a swirling national controversy over proposals to extend a massive wall along its banks.

The border depicted by the president and the one lived by most McAllen-area residents are two very different places. The collision between the border’s reality and how it is being portrayed for those thousands of miles away came sharply into focus on Thursday during Mr. Trump’s trip to McAllen, where he met with local, state and federal officials amid protests and counterprotests. 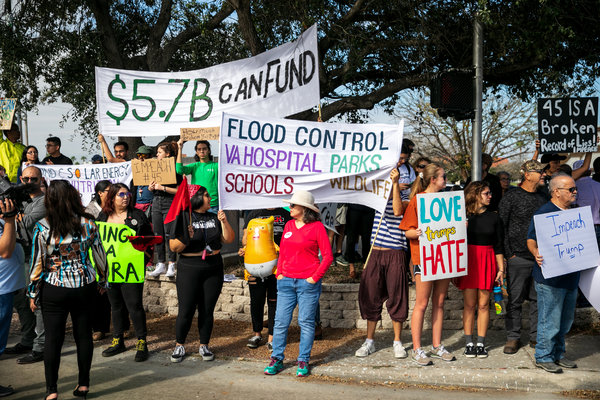 Mr. Trump carried his message of border security to a majority-Hispanic city of 142,000 that has been on the front lines of the surge in Central American families coming into the United States.

Preliminary plans are underway to expand some border fencing in parts of the Rio Grande Valley, but McAllen has a well-honed infrastructure to handle migrants, both legal and illegal. Many here have been frustrated that the city has become the symbol of a faraway political debate so entrenched it has shut down parts of the federal government.

“On the one hand, I don’t like my city being portrayed as if there’s a crisis and unrest, when the reality is we’re one of the safest cities in the U.S.,” said Monica Stewart, a longtime resident and small-business owner who has advised lawmakers on border security and international trade issues.

Ms. Stewart does not believe the border wall Mr. Trump wants to build is necessary, and said there were better ways to improve border security using technology.

McAllen — which was named for the family that settled in the area in the early 1900s — is a largely blue city, with scores of Hispanic Democrats who help run its municipal agencies, courts, schools and businesses. Many of them were critical Thursday of the president’s visit and said they believed he had manufactured a border crisis to sell his plan for a wall.

But McAllen and the larger Rio Grande Valley region are also home to small but vocal numbers of Hispanic conservatives. Many are from middle-class Mexican-American families who have lived in the area for generations and do not identify with the Central American migrants fleeing poverty and violence.

Like much else about life on the border, McAllen is never quite what people imagine it to be.

One of the most frequent places to run into Border Patrol agents in McAllen is not on the border itself but at Wingstop or Buffalo Wings & Rings. McAllen has synagogues and country clubs. Its biggest employer is the local school district and community college. Its tallest building is the 17-story Chase Tower, home to real estate developers and Senator Ted Cruz’s district office.

And its politics are far from predictable.

As the president traveled through town, all he had to do was look out the motorcade’s windows to see a mix of opposition and support for his visit. Parts of the route were lined with protesters who waved signs — “Our home is not a crisis” and “No al muro” (Spanish for “No to the wall”) — and with Trump supporters who had their own signs.

At one moment on the protester side, police officers wrestled at least one person to the ground as tempers flared.

The McAllen police said two people were arrested following a confrontation between Trump supporters and protesters.

Joe Cantu, a 75-year-old Trump backer who wore a red Make America Great Again hat and matching T-shirt, parked at a mall near the airport and was preparing to join a crowd of fellow supporters who gathered to cheer the president’s visit. Some held flags and signs reading “Build the Wall” and “Latinos for Trump.”

“Hell yeah, we need a wall,” said Mr. Cantu, a South Texas native who is the former police chief of the nearby town of San Juan.

Mr. Trump at one point walked over to dozens of supporters gathered at the airport.

“Oh, I like that,” Mr. Trump said when a supporter handed him a military baseball cap with “Trump” emblazoned on the front.

Joaquin Zamora, a city commissioner who was part of a contingent of officials and supporters who greeted Mr. Trump at the airport, said he was proud to have the president of the United States visit the city where he was born and raised. But he did not completely support Mr. Trump’s plan to build a wall in a region that thrives on binational commerce and trade.

“I think over all it’s not the neighborly thing to do with our neighbors to the south,” said Mr. Zamora, 47, who is also a Hidalgo County prosecutor. “You shouldn’t be using immigration to shut down the government to get what you want. Certainly I think there’s other ways to go about it.”

Mr. Zamora said he hoped the president’s visit would help dispel, not fuel, misconceptions about the city.

“We’re a wholesome community,” he said. “We’re an American city that’s on the border. What we don’t want is the perception that we’re a dusty border town with burros and carts, AK-47s being fired every 30 minutes and Molotov cocktails being thrown. Because that’s not what’s happening in McAllen.”

The county park adjacent to where Mr. Trump got his briefing, known as Anzalduas Park, lies directly along the Rio Grande, and on Thursday, for the presidential visit, it was closed to the public.

City residents said the last time that happened for a presidential visit was in 2006, when President George W. Bush held a news conference there. It is, they said, a place where families go on weekends for barbecues and gatherings, and one of its defining features is that just across the river, on the Mexican side, families fill the banks for their own barbecues and gatherings.

They are so close, united by a river, that they could wave at one another. Sometimes, they do just that.

Mitchell Ferman reported from McAllen, and Manny Fernandez from Houston.