Oregon has an addiction problem. Pockets of rural poverty, chronic homelessness and cities with lots of young people have given the state one of the highest rates of substance abuse in the nation. It is also, because there is so little money allocated to it, one of the toughest places to get treatment.

A proposed solution on the ballot next month would be one of the most radical drug-law overhauls in the nation’s history, eliminating criminal penalties entirely for personal use amounts of drugs such as heroin, methamphetamine and cocaine. New tax revenues from drug sales would be channeled toward drug treatment.

Supporters of the Oregon proposal, Measure 110, say the swirling, transformational forces of 2020 — the coronavirus pandemic, as well as the wave of social unrest over race, policing and incarceration — have highlighted a need for top-to-bottom change. Opponents say decriminalization courts disaster by normalizing drugs that carry the risk of deadly addiction.

Oregon is far from alone in stepping out onto new terrain. Legal marijuana, stalled for years in politically conservative states even as more left-leaning areas plowed ahead, has found a place on the ballot this year in Arizona, Mississippi, Montana and South Dakota. National groups that have long dreamed of a federal overhaul of drug laws say that success in those states could bring Republican elected officials into Congress with constituents who have said yes to legalization, potentially tipping the balance in Washington.

Money is an undercurrent everywhere, as many state budgets face big shortfalls as a result of the drop-off in consumer spending during the pandemic, forcing a search for alternative tax sources.

“The pandemic has only highlighted and intensified the need for new options,” said Sam Chapman, the campaign manager for Yes on 109, a separate drug measure on the ballot in Oregon that would make psilocybin, the psychoactive ingredient in magic mushrooms, legal for mental health treatment. Voters in Washington, D.C., will decide in a ballot measure there whether to make possession of fungi-based psychedelics the lowest level of police priority, but Oregon would be the first with a statewide treatment policy. “We all know someone who is suffering,” Mr. Chapman said.

Dave Lewis, a Republican who served in the Montana Legislature and as state budget director under three governors over a 42-year public career, framed the argument for legal recreational marijuana in his state as the counterpunch in a fight Montana needs to win.

“This Covid thing is kicking our butts,” said Mr. Lewis, 78, who is advising the group backing recreational marijuana legalization, though he is not, he said, a consumer himself or much interested in becoming one.

Mr. Lewis said that a sharp decline in visitors, as people have been locked down at home around the country, has hit Montana’s outdoor tourist economy hard; marijuana legalization could contribute 4,000 or 5,000 new jobs, according to an analysis by the University of Montana. “That’s huge in Montana — my goodness gracious, we’re like 44th in family income,” he said.

Half the tax revenue from the Montana measure is pledged to public lands and outdoor recreation — an estimated $18 million a year — which has brought in powerful new political allies, including the Montana Wildlife Federation and the Trust for Public Lands, both of which have signed on as supporters.

In New Jersey, which is bracing for an 18 percent decline in tax revenues next year, the drug debate is framed around police and police budgets. Gov. Phil Murphy, a Democrat, is backing a recreational marijuana measure on the ballot, telling voters that saying yes to legalization would save tens of millions of dollars and allow police officers to focus on more serious public safety threats. 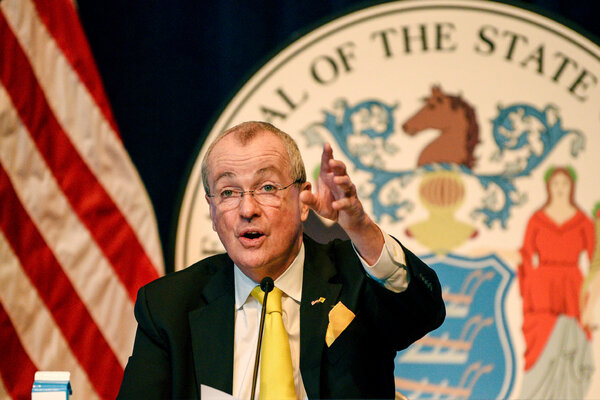 In South Dakota, where voters will decide on medical marijuana and recreational sales at the same time in two separate ballot measures, a key pitch is a plan to allocate half of the revenues from recreational marijuana taxes to public schools.

Opponents of drug legalization argue that the need to find new revenues during the pandemic may be leading people to grasp at straws — and leaving them prone to being manipulated and misled.

In Mississippi, the Legislature has inserted itself into the debate over a measure to legalize medical marijuana. Lawmakers put a separate measure of their own on the ballot that would give them the power to decide how any legalization is implemented.

In Nebraska, where a medical marijuana measure qualified for the ballot, an antidrug group sued and the state Supreme Court last month struck it from the ballot. In South Dakota, opposition has been led by the state Chamber of Commerce, which argues that highway and worker safety will suffer.

Opponents to the hard-drug decriminalization measure in Oregon say it would lead to more addiction both by making drugs easier to get and also by removing law enforcement and the courts from the equation.

Currently, many people arrested with small amounts of opiates or other drugs are offered a way out of criminal prosecution through a diversion into treatment and counseling. But without a judge forcing the issue, opponents said, many people will not face up to an addiction problem.

“The sad reality is that many, many people will never seek treatment without the motivation of criminal charges,” said Paige Clarkson, a prosecutor in Marion County, Ore., and the president of the Oregon District Attorneys Association.

The American Psychiatric Association and the Oregon Psychiatric Physicians Association both oppose the state’s psilocybin proposal because they say that while the drug has indeed shown medical promise — the federal Food and Drug Administration last year called psilocybin a potential “breakthrough therapy” for treating major depression — the measure’s proponents are going too far by saying it might help everything from anxiety disorders to addiction.

Across the country, backers of these new drug measures say that the old ways simply have not worked, and that the pandemic has made everything worse. Covid-19 outbreaks in jails and a growing awareness of how many people of color have been imprisoned for drug offenses make a potent new argument, supporters said, for thinking another way.

“Voters, and people at large, increasingly understand that now, especially, is not the time to be arresting somebody for drug addiction,” said Peter Zuckerman, the campaign manager for the 110 measure. “Drug addiction is a health issue; it deserves a health response,” he added.

Both sides in Oregon’s decriminalization debate do agree on one thing, though — that the state’s drug problems have gotten worse. A decade ago, according to federal health reports, Oregon was 10th worst in the nation in the proportion of residents with a substance abuse disorder, including alcohol. By 2016-17, in the most recent rankings, it had the fourth highest rate. At the same time, the percentage of people who needed treatment but were not receiving it rose from ninth to third worst in the nation.

And while some states that already have legalized marijuana have not realized as much in new tax revenue as had been hoped — California, for example, had trouble luring marijuana buyers away from the black market — the pandemic has been good for legal marijuana sales in Oregon.

Demand has soared, up almost 75 percent between March and August of this year, giving the state budget a jolt of tax revenue in the process.