Seated at tables six feet apart in a hotel conference room, 12 jurors scribbled letters on slips of paper to indicate how they were leaning on a murder charge against Derek Chauvin, the former Minneapolis police officer on trial for killing George Floyd.

When the jury foreman tallied the votes that morning, one of the jurors recalled, there were 11 papers with a “G” written on them — guilty. One paper said “U,” for unsure.

The seven women and five men spent the next few hours poring over the evidence in one of the most closely watched trials in a generation, according to Brandon Mitchell, who has been the only juror to publicly describe the deliberations last week near Minneapolis. Mr. Mitchell said the jurors watched the graphic videos of Mr. Floyd’s death, discussed the testimony of many of the witnesses and experts, and created their own timeline using markers and a whiteboard. By lunchtime, Mr. Mitchell said, the juror who had been unsure, a white woman, had made up her mind: Mr. Chauvin was guilty of all charges.

Mr. Mitchell, 31, a high school basketball coach in Minneapolis, described the deliberations in an interview on Thursday, shedding light on what had happened inside the jury room before the jurors convicted Mr. Chauvin on two murder charges and a manslaughter charge.

Mr. Mitchell said he was excited when he was chosen for the jury and glad to see that the jury was diverse; there were four Black jurors, including Mr. Mitchell, as well as six white jurors and two multiracial jurors. They ranged in age from their 20s to their 60s.

“The pressure, I was ready to embrace it,” Mr. Mitchell said. “Whichever way the verdict went — guilty or not guilty — it was important for me as a Black man to be in the room.” 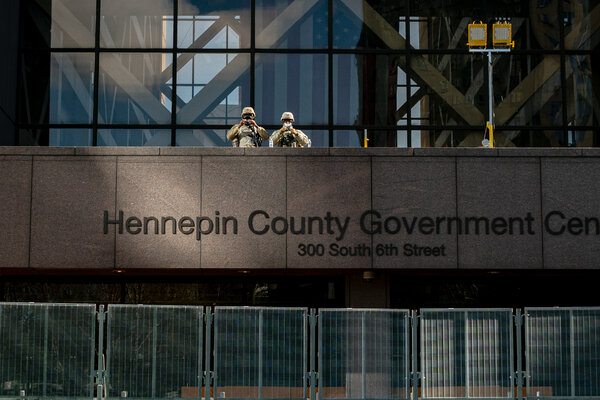 He said he had expected, before the trial, that he would struggle to come to the right decision in the case, but that after three weeks of testimony, he found the evidence overwhelming.

“I had no doubt in my mind,” Mr. Mitchell said of his decision about Mr. Chauvin’s guilt. Jurors discussed the case for about seven hours over two days before reaching a verdict on the afternoon of April 20, Mr. Mitchell said. They spent much of the first evening of deliberations getting to know one another rather than talking about the case, he said.

Mr. Chauvin, the white officer who was videotaped kneeling on the neck of Mr. Floyd, a Black security guard, for more than nine minutes last May, is scheduled to be sentenced in June and could face decades in prison.

Immediately following closing arguments in the trial on April 19, jurors gathered in a conference room at the hotel where they were sequestered and surrendered their phones for deliberations, Mr. Mitchell said. They took a vote on whether to keep their masks on during deliberations (they chose, unanimously, to take them off), and soon moved to discussing the evidence and the law.

They first considered second-degree manslaughter, the least serious of the charges Mr. Chauvin was facing, and the juror who would later indicate uncertainty about murder said she was unsure about the manslaughter charge, Mr. Mitchell said. Sitting at individual tables that were placed in a U-shape, the jurors took turns describing their thoughts. The jurors decided to wait until the second day of deliberations to discuss the murder charges, but dinner did not arrive for several more hours, so they made small talk instead, chatting about their jobs and children.

At 6:45 the next morning, deputies knocked on each of their hotel doors to wake them up for breakfast and a second day of deliberations, Mr. Mitchell said.

As the jurors considered the murder charges, Mr. Mitchell said, they focused at one point on the exact cause of Mr. Floyd’s death. Many jurors said they believed the prosecutors’ version of what had happened — that Mr. Chauvin’s knee had caused Mr. Floyd’s death — but at least one juror who supported a conviction said she could not be sure that Mr. Chauvin’s knee had been the cause. Still, Mr. Mitchell recalled, the juror said she believed that the former officer was nonetheless responsible because he had continued to pin Mr. Floyd down even after he lost consciousness and never provided medical aid.

After several hours of discussions over a third-degree murder charge, all of the jurors said they favored a conviction, Mr. Mitchell said, and after another half an hour, they had agreed on a second-degree murder conviction as well.

Jurors decided to wait until after lunch to fill out the forms that would make their decision official, Mr. Mitchell said.

Shortly before 2 p.m., they alerted deputies that they had reached a verdict and were rushed from the hotel to the courtroom, where Judge Peter A. Cahill read the verdict.

Mr. Mitchell said that for many of the jurors, including himself, the most powerful witness testimony had come from Dr. Martin J. Tobin, a lung expert who pinpointed what he said was the exact moment that Mr. Floyd took his final breath.

“He just had all of our attention 100 percent,” Mr. Mitchell said of Dr. Tobin, who testified for the prosecution. “I don’t know if there is any other witness that captured us like that.”

Mr. Mitchell said he found the defense team’s case to be weak, lacking in revelatory testimony that might poke holes in the prosecution’s case.

“I was waiting for a moment that was going to be climactic like ‘Wow!’ — a ‘Boom! Aha!’ moment — and it just never happened,” Mr. Mitchell said. “Nothing ever hit. It was kind of deflating. It made the case easy.”

Judge Cahill has said that the jurors’ identities will be kept secret until at least October, though they are free to speak publicly if they choose to. One of the two alternate jurors, who attended the trial but was excused before deliberations began, has spoken publicly, saying she never doubted that Mr. Chauvin was guilty.

Throughout the trial, the jurors referred to one another only by their juror numbers — Mr. Mitchell was No. 52 — until they began deliberations and shared their names. Mr. Mitchell said he and the other jurors made tentative plans to get together for drinks in the summer or the fall, when the case is no longer drawing as much attention.

Mr. Mitchell said that in the weeks after Mr. Floyd’s death, he had been determined not to watch the video of Mr. Chauvin kneeling on Mr. Floyd’s neck, but had seen some of it when it began playing automatically on a social media feed.

As protests engulfed Minneapolis following Mr. Floyd’s death, Mr. Mitchell, who lived downtown, said he had frequently discussed the killing with high school students on the teams he coached to help them express the anger and sadness they felt. He said that he found the protests warranted and necessary, and that he hoped they would lead to change.

“I just want to see police be more compassionate when it comes to Black men, instead of moving with such aggression,” he said.