A squalid tent camp on the border is the result of President Trump’s unprecedented limits on asylum. Some people have waited in filthy conditions for more than a year to obtain refuge in the United States.

Children ran through the migrant camp in Matamoros, Mexico, while it was being fumigated.Credit…Ilana Panich-Linsman for The New York Times 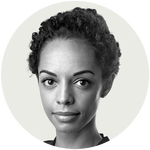 MATAMOROS, Mexico — A butter yellow sun rose over the crowded tent camp across the river from Texas and a thick heat baked the rotten debris below, a mixture of broken toys, human waste and uneaten food swarming with flies.

Clothing and sheets hung from trees and dried stiff after being drenched and muddied in a hurricane the week before.

As residents emerged from the zipper-holes of their canvas homes that morning in August, some trudged with buckets in hand toward tanks of water for bathing and washing dishes. Others assembled in front of wash basins with arms full of children’s underwear and pajamas. They waited for the first warm meal of the day to arrive, though it often made them sick.

The members of this displaced community requested refuge in the United States but were sent back into Mexico, told they must wait. They came there after unique tragedies: violent assaults, oppressive extortions, murdered loved ones. They are bound together by the one thing they share in common — having nowhere else to go.

“Sometimes I feel like I can’t hold on anymore,” said Jaqueline Salgado, who fled to the camp from Southern Mexico, sitting outside her tent on a bucket as her children played in the dirt. “But when I remember everything I’ve been through, and how it was worse, I come back to the conclusion that I have to wait.”

Ms. Salgado is one of about 600 people stranded in a place that many Americans might have thought would never exist. It is effectively a refugee camp on the doorstep of the United States, the first of its kind in the country’s 250-year history. 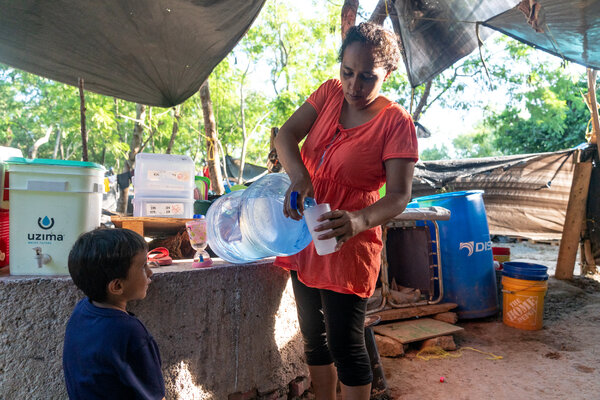 After first cropping up in 2018, the encampment across the border from Brownsville, Texas, exploded to nearly 3,000 people the following year under a policy that has required at least 60,000 asylum seekers to wait in Mexico for the entirety of their legal cases, which can take years.

Those who have not given up and returned home or had the means to move into shelters or apartments while they wait have been stuck outside ever since in this camp, or others like it that are now strung along the southwest border.

Many have been living in fraying tents for more than a year.

The Trump administration has said the “remain in Mexico” policy was essential to end exploitation of American immigration laws and alleviate overcrowding at Border Patrol facilities after nearly two million migrants crossed into the United States between 2017 and 2019.

The Mexican authorities have blamed the American government for the situation. But they have also declined to designate the outdoor areas as official refugee camps in collaboration with the United Nations, which could then have provided infrastructure for housing and sanitation.

“It has been the first time we have been in this situation,” Shant Dermegerditchian, director of the United Nations High Commissioner for Refugees’ office in Monterrey, Mexico. “And we certainly don’t support this.”

The U.S. Supreme Court agreed this week to review the policy after it was successfully challenged in the federal Court of Appeals for the Ninth Circuit. The case will not be resolved until after the election, so those living in the camp have months of waiting ahead, if not longer.

The camp drew attention during Thursday night’s presidential debate, when former Vice President Joseph R. Biden Jr. noted, “This is the first president in the history of the United States of America that anybody seeking asylum has to do it in another country,” he said. “They’re sitting in squalor on the other side of the river.”

The arrival of the coronavirus has made things much worse. Though only a few cases broke out at the camp, most of the American aid workers who entered regularly to distribute supplies stopped coming, hoping to avoid transporting the virus.

The Gulf Cartel, which traffics drugs across the border and is as powerful a force as local law enforcement, moved in to fill the void.

The gang charges tolls to camp residents who decide to swim across the river on their own and sometimes kidnaps them for ransom. Beatings and disappearances have also become more common — sometimes to protect women or children who are being abused, but other times because camp residents have violated the gang’s rules about when and where they are permitted to roam outside their tents.

Nine bodies have washed ashore on the banks of the Rio Grande near the camp in the last two months; the Mexican authorities said most of the deaths were a result of a rise in gang activity during the pandemic.

“I haven’t done anything, I haven’t stolen anything, and still I have to keep escaping. Why?” Ms. Salgado said that day in August.

She said she and her children were on the run from her abusive husband, who drank excessively and would beat them when he was upset, and because her brother had been kidnapped and killed. Just then, her 11-year-old son, Alexander, who seemed to have only vaguely been paying attention, put down his toys and started to heave.

“He is constantly nervous,” his mother said. “Every time we fought, his anxiety would make him sick and he would end up vomiting.”

Most children in the camp have not attended formal schooling since they left home. Parents agonize over whether they will be able to make up for the lost time. Some have become worried enough to launch their children across the river on the backs of smugglers, sending them alone on the last leg of their dangerous journey to the United States.

Those who cannot bear to make such a decision are often tormented by second-guessing.

“I was scared I would never see him again because he’s all I have,” said Carmen Vargas, clinging to the arm of her 13-year-old son, Cristopher, who has a mop of curly brown hair and is tall for his age. “But my son needs to go to school. He’s only 13 years old and practically he has lost two years already.”

Cristopher teared up listening to his mother describe the life they had left behind. She pulled out identification cards showing that she had been a municipal police officer in Honduras, but said her success became a liability when she put a powerful drug cartel member in jail in 2018. Within hours, the cartel announced a hit on Ms. Vargas. She and Cristopher fled, leaving behind the ornate wooden furniture she had saved up to buy and a refrigerator full of food.

With cupped palms, Ms. Vargas caught beads of sweat that dripped down her forehead as she spoke. She apologized for the stench; just outside her tent, insects crawled around a pile of feces that had washed up when the river flooded. “You have to withstand everything here: sun, water, cold, heat, we have it all.”

The camp residents are chronically sick with flulike viruses and stomach bugs that wend endlessly through the tents and with respiratory problems aggravated by the dusty air. Their skin is pockmarked from the throngs of mosquitoes that overwhelm the camp after it rains.

Most acknowledge that life on the other side of the border would hardly be charmed — especially if they lost their asylum cases and had to live in the shadows.

“Without papers is it still better to be in the U.S. rather than here? Yes, it’s a thousand times better,” said Lucia Gomez, from Guerrero, Mexico, as she picked up clothing and toys that had been scattered outside their tent by hurricane winds. “They might find you, detain you and deport you,” she said. “But if you manage to avoid them, you will be able to put food on the table.”