ALBANY — The campaign has all the hallmarks of a grass-roots effort: boisterous rallies, emotional testimonials and appeals to remember working-class New Yorkers, as lawmakers weigh a total rewrite of New York City’s rent laws.

But the campaign’s organizers are not tenant activists or community groups. Instead, they are a group often cast as the polar opposite: the real estate industry.

Confronted with a Democratic takeover of the State Legislature and emboldened progressive activists, the city’s landlords and developers — long accustomed to ruling New York through political donations and expensive lobbyists — are adopting the tactics of their activist foes.

They have sent buses of electricians and boiler repair workers to Albany to protest the proposed changes. They have organized rallies outside public hearings. They have paid for mailers urging constituents to call their representatives, and informally referred to organizing “Worker Wednesdays” in the Capitol to counter activists’ tradition of “Tenant Tuesdays.”

They have formed groups with generic names — Responsible Rent Reform, Alliance for Rental Excellence — to run social media advertisements featuring minority construction workers and maintenance staff, who worry that they would lose work if the current laws, which expire on June 15, are overhauled.

The goal is to deliver the industry’s message — that too-strict rent regulations would affect not only wealthy landlords, but also the working class — in a way that does not seem like it is coming from the industry.

“A lot of the new progressive elected officials have a knee-jerk reaction to dismiss anything we put out there,” said Frank Ricci, the director of government affairs for the Rent Stabilization Association, an industry group that represents about 25,000 building owners.

“When you have that dynamic going on, it calls for a different approach than in other years,” he said.

Responsible Rent Reform has been the primary face of that new approach. The organization — a joint effort of the Rent Stabilization Association, the powerful Real Estate Board of New York and two smaller industry associations — created its website in March, assembling testimonials from workers and landlords, many nonwhite or immigrants, who say that too-tight regulations would discourage property owners from doing upkeep. The group has also paid for television advertisements and mailers featuring the same people.

Its most recent video includes members of 32BJ S.E.I.U., a politically powerful union that represents doormen, superintendents and custodial staff. “Thousands of good union jobs depend on a healthy New York rental market,” they say in the ad.

The campaign’s emphasis on working class New Yorkers belies the hefty funds behind it.

Facebook’s ad database shows that Responsible Rent Reform has spent more than $23,000 there since May; it has also spent nearly $39,000 on Twitter advertisements, according to that website’s database.

The public relations firm working with Responsible Rent Reform, SKDKnickerbocker, spent more than $780,000 on media buys in March and April, according to state lobbying records. Filings for May and June are not yet public.

Before this year, the Rent Stabilization Association had not paid for mailers related to rent laws in 15 years, Mr. Ricci said.

The new effort underscores the scope and suddenness of the threat the industry faces.

Many of the Democrats who won legislative seats last year campaigned on a pledge to muzzle the influence of real estate, which had long had reliable allies in the formerly Republican-led Senate. Several Democratic senators have sworn off real estate contributions, and some have refused meetings with industry leaders. 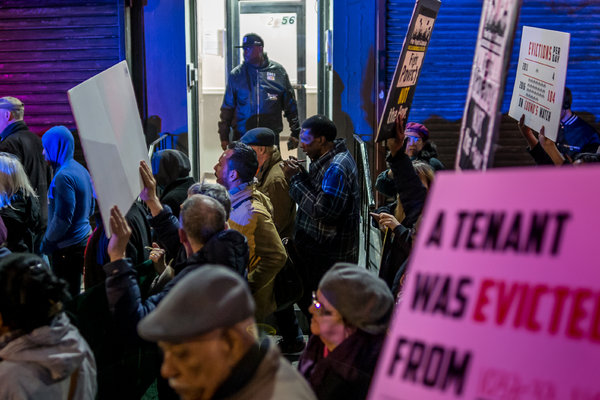 And the progressive left has become a prominent force in Albany, with many of its activists having worked on the new lawmakers’ campaigns last year and, in the months since, not hesitating to demand drastic change in return.

“They’ve watched a lot of grass-roots groups get progressive legislation passed over the last year,” Ellen Davidson, a staff attorney at the Legal Aid Society who is pushing for stronger rent laws, said of the real estate industry. “Perhaps they think if they clothe themselves as a grass-roots group, that the Legislature will listen to them more.”

But compared with the hundreds of tenant activists who have descended on Albany each week, the real estate industry’s new counterefforts have been fledgling, sporadic — and to progressive activists, unconvincing.

Along with Responsible Rent Reform, the Alliance for Rental Excellence has made a handful of appearances in recent weeks, usually at Senate housing hearings across the state. At each event, a few dozen contractors waved handmade signs and wore matching T-shirts, warning of job loss, though they did not testify at the hearings themselves.

The group’s website does not indicate who is behind it and lists a post office box in Brooklyn as its address. A limited liability company with the same name was created in February, state records show. The group hired a lobbying firm, Kivvit, in mid-May.

The lobbying forms were signed by a man named Gary Flippen, who works at a property management company in Brooklyn. Mr. Flippen did not return a request for comment.

A spokesman for the Alliance for Rental Excellence declined to say who was funding the group, but said the alliance was a “small, independent coalition that understands both sides of this issue.”

The group “wants to make sure everyone considers the unintended consequences of changes to rent regulations, including the effects on ‘mom and pop’ businesses that maintain apartments,” the spokesman, Josh Rosenfeld, said.

The alliance’s website features many of the same videos as the Responsible Rent Reform site.

Senator Julia Salazar, who won her seat in Brooklyn last year on a promise to strengthen rent laws, called the effort to project a grass-roots image “bogus.”

“I think they’re being lied to by the real estate industry,” she said of the workers featured in the effort.

“It’s upsetting to see a lobby like Rebny, that has a board with several members who are billionaires, using this tactic of telling working people that these policies, that are actually intended to help tenants, are hurting them,” Ms. Salazar continued, referring to the Real Estate Board of New York by its nickname.

Ms. Davidson said the industry groups’ involvement in mobilizing contractors and workers undercuts the idea of a bottom-up movement.

“They’re gathering together people who are theoretically grass-roots groups,” Ms. Davidson said, but “who carry nicely printed-out signs, who wear printed-out T-shirts and who’ve hired a lobbyist who used to work for the governor.”

Ms. Davidson was referring to the Alliance for Rental Excellence’s hiring of Kivvit, a lobbying firm led by Mr. Cuomo’s former campaign manager. Individual developers have also hired other well-connected lobbying firms, including SKDKnickerbocker and Patrick B. Jenkins and Associates, which was founded by the college roommate of the Assembly speaker, Carl E. Heastie.

Indeed, even as the real estate industry has unrolled its new approach, it has not abandoned more familiar ones.

The four industry groups behind Responsible Rent Reform, either individually or as a coalition, are paying lobbying firms more than $66,000 each month to push on the rent laws, state filings show. That is in addition to $100,000 that the coalition anticipated it would spend on its own between March and December, as well as a $30,000 retainer to another consulting firm and a $720 hourly rate to a third company, beginning last month.

Also, since January, Rebny’s political action committee has given $15,000 to Mr. Cuomo and more than $114,000 to state legislators, according to filings. Many of the donations have flowed to suburban Democratic senators.

Jay Martin, the executive director of the Community Housing Improvement Program, a trade association representing about 4,000 building owners, said the new focus on average New Yorkers was not some “Machiavellian idea to undermine” the rent laws.

Mr. Martin’s group, known as CHIP, has gone perhaps the furthest in seeking new allies in the past few months, undertaking a wholesale landlord makeover of sorts: issuing statements denouncing President Trump’s policies on undocumented immigrants; sponsoring a Manhattan food bank; and even reaching out to nonprofit housing groups.

“I’m not going to say that a part of it doesn’t have to do with the rent law renewals. But this isn’t going to stop no matter what happens in June,” Mr. Martin said, referring to the renewal deadline. “We’re going to keep pushing to reform our industry.”

The contrast between the tenant activists and the newer opposing forces was apparent on Wednesday, when a few dozen contractors, organized by Responsible Rent Reform, traveled to Albany for a rally.

The day before, hundreds of pro-tenant protesters had flooded the Capitol for hours, blocking doorways, delivering speeches and being arrested by the dozens as they demanded reform.

On Wednesday, by contrast, the contractors lined up quietly in a hallway as they awaited their rally’s start time.

Sajid Mahmood, the owner of Delta General Contracting in the Bronx, said he had learned of the protest from CHIP and had received letters from landlords saying they would reduce contracts for his company if the laws were passed.

Juan Hinojosa, a carpenter at Bright Light Construction in the Bronx, said his boss had told him about the event. “I’ve got a family to feed. I’ve got rent to pay,” he said. “It’s my job, and we’ve got to fight for this.”

When the news conference began, the workers assembled in a semicircle, still without speaking. One landlord spoke, followed by an employee of an oil company.

Then the event was over. It lasted less than 10 minutes.

Vivian Wang is a reporter for the Metro Desk, covering New York State politics in Albany. She was raised in Chicago and graduated from Yale University. @vwang3