Letter, signed by over 200 artists, writers and musicians, says governments should take steps to stop the bloodshed. 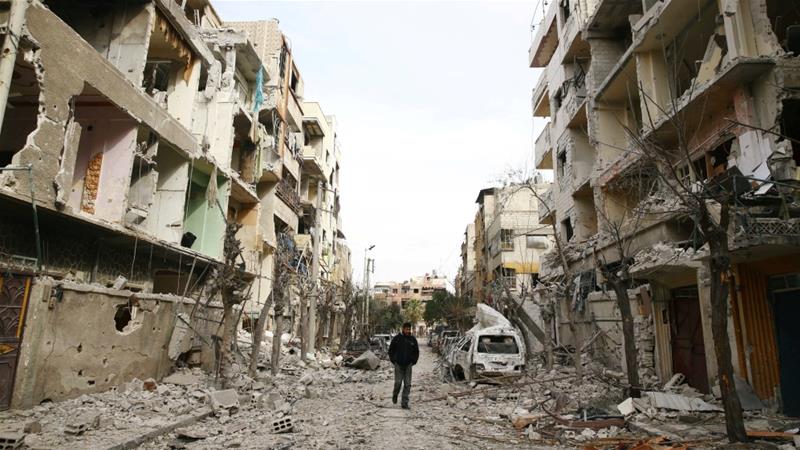 Over 200 artists, activists, writers and musicians have issued an open letter calling for world governments to “stop the Syrian genocide”.

The signatories come from across the globe, including many of the major actors in the conflict: Syria, Russia, the US and Turkey.

“The United Nations says it has run out of words on Syria, but we, the undersigned, still have some for the governments, parliamentarians, electorates” and decision-makers of the world, the letter, published at the New York Review of Books on Tuesday, begins.

The Syrian military, with support from Russian warplanes, is currently battering the besieged Damascus suburb of Eastern Ghouta.

The UN, along with US diplomats, has called for an immediate end to the military campaign, which UN chief Antonio Guterres has called “hell on earth”.

Eastern Ghouta is the last rebel stronghold near Damascus, the Syrian capital. It has been under siege since 2013.

Russian President Vladimir Putin called for a humanitarian ceasefire in the enclave that was set to begin at 9am local time on Tuesday, though activists told Al Jazeera the temporary truce was violated less than two hours after it began.

Turkey has also mounted an assault on northern Syria’s Afrin, which Kurdish forces freed from the Islamic State of Iraq and the Levant (ISIL, also known as ISIS) group over the course of the five-year civil war.

The campaign has stirred tensions between Turkey and the US. The US armed and supported Kurdish forces in the fight against ISIL.

The Syrian air force is also bombarding Idlib, a northwestern province that is the last major population centre held by rebel forces.

Dozens of civilians have been killed in recent air raids, according to monitoring groups.

“Today, as Idlib and Afrin burn, the inevitable is unfolding in Ghouta, the huge open-air concentration camp about to enter its fifth year under siege. What happens next is predictable,” the open letter states.

The writers called for UN member states to uphold the “Responsibility to Protect” (R2P) under the UN Office on Genocide Prevention.

The R2P calls for signatories to take “appropriate diplomatic, humanitarian and other peaceful means, in accordance … to help protect populations from genocide, war crimes, ethnic cleansing and crimes against humanity”.

The measure was endorsed by all UN member states in 2005.

“The destruction of Syria was preventable, and can now only be ended by the elected and appointed members of democratic bodies if they fulfil their obligations” under the R2P, the letter said.