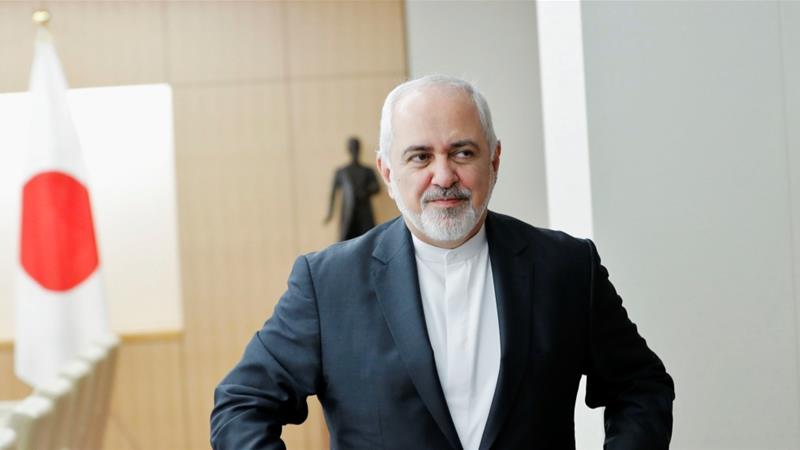 Iran has accused the United States of instigating an “unacceptable” escalation of tensions, as Washington pledged to continue a campaign of “maximum pressure” on the Islamic Republic.

Speaking in Tokyo on Thursday, Foreign Minister Javad Zarif said Tehran would not hold talks with Washington but added it would act with caution following the recent deployment of US military units to the Gulf region.

“We believe that escalation by the United States is unacceptable and uncalled for,” he told reporters in Tokyo, where he is meeting with Japanese officials.

“[But] we exercise maximum restraint … in spite of the fact that the United States withdrew from JCPOA last May,” he added, referring to the landmark 2015 nuclear deal brokered between the Islamic Republic and several other world powers.

US President Donald Trump last year unilaterally pulled out of the agreement, which curbs Iran’s nuclear programme in exchange for sanctions relief, and reimposed punitive measures, suggesting Iran was a destabilising actor in the Middle East.

Since then, Trump’s administration has steadily ratcheted up pressure on Tehran: blacklisting Iran’s Revolutionary Guard Corps as a “terrorist group”, moving to reduce Iranian oil exports to zero and sending a US aircraft carrier and B-52 bombers to the Gulf in response to an unspecified threat.

On Wednesday, in the latest escalation, the US decided to pull all “non-essential” staff out of Iraq, which neighbours Iran, citing undisclosed “credible and possibly imminent threats”.

The moves have added to growing fears that the long-time rivals could be on course for conflict despite both sides publicly stressing they have no desire for war.

Amid the ongoing tensions, a Saudi Arabian state newspaper on Thursday called for “surgical” US strikes in retaliation to alleged threats from Iran, the kingdom’s regional archrival.

The Arab News published an editorial which argued that attacks earlier this week against Saudi energy targets, claimed by Iranian-backed Houthi rebels operating in neighbouring Yemen, meant the next logical step for the US “should be surgical strikes,” without elaborating on what specific targets should be struck.

The editorial added that it was “clear” US sanctions were “not sending the right message” to the Islamic Republic, adding “they must be hit hard”.

[email protected] and I discussed #Iran last week in London and again in Brussels on Monday. We share the same assessment of the heightened threat posed by Iran. As always we work closely with the US ?? ??

The developments came as White House Press Secretary Sarah Sanders said Washington would continue its “maximum pressure” campaign on Iran, adding the White House would like to see “behavioural change” from the Islamic Republic.

Sanders also refused to respond to reports suggesting the White House has contacted Swiss officials in a bid to try and establish a communications channel with Tehran.

Instead, she said Trump was ready to respond to any show of aggression by Iran, adding: “If they take action, they’re not going to like what he does in response.”

Iran, too, has asserted its right to defend itself, with Zarif on Thursday describing the US pressure campaign as an “act of suicide”.