A few days after Frank Lamorte tested positive for the coronavirus, he got an unexpected phone call.

Mr. Lamorte, a painter for the Metropolitan Transportation Authority, had a persistent cough and a high fever. He worried about infecting his wife, his stepdaughter and his five-month-old grandson, who live with him in Oak Ridge, N.J., about 40 miles west of Manhattan.

So the call from Barbara Morton, a chaplain with the M.T.A., provided some much needed reassurance.

“It was a relief to know that somebody actually cares,” said Mr. Lamorte, 50, who returned to work in January after being out for six weeks. “And it came from the heart.”

Ms. Morton occupies a rare niche — the M.T.A., which runs New York’s subway, buses and two commuter rails, is one of the few transit agencies in the country to have a chaplaincy program. In a typical year, it helps employees deal with stresses like abusive passengers or deaths on the tracks, as well as more personal problems.

But the pandemic was something else entirely, ravaging the nation’s largest transit agency, emptying trains and buses and sickening and killing its workers at a devastating rate. More than 160 workers have died from Covid-19 and thousands more have contracted the virus.

Compounding the crisis, about 60 people were fatally struck by trains last year, about the same number as the year before, even though ridership plunged. And there were concerns over potential layoffs before an infusion of federal aid helped rescue the M.T.A. from a financial free fall.

Over the course of the pandemic, the M.T.A.’s nearly all-volunteer force of about 70 chaplains has mobilized to check in with workers who are sick or quarantining, offer support to families of employees who died of the virus and counsel those feeling isolated or burned out.

“There’s a lot of loneliness, a lot of depression, a lot of uncertainty circulating amongst our people,” said the Rev. George Anastasiou, the M.T.A.’s chief chaplain and one of two who are paid for their service. “Chaplains, whether they work for the M.T.A. or not, are severely impacted because they are literally bombarded with so many requests for someone to listen to them, someone to guide them, someone to support them, someone to stay by them.”

Though the chaplains’ normal activities — like making rounds of subway stations — were paused early during the outbreak, they are now meeting workers in person, sometimes at subway stations or bus depots, as well as over video.

The chaplains’ office has helped with funeral arrangements and attended funerals if asked, Father Anastasiou said. Chaplains of any faith are available, but the service does not have to be overtly religious and many workers who seek out chaplains want to talk about issues unrelated to their spiritual beliefs.

Like most large employers, the M.T.A. also offers in-house counseling as well as referrals to outside mental health providers. But to many workers, the chaplain program, which started in 1985, provides a listening ear without some of the concern over how they will be perceived if others find out they are seeing a therapist, said Annette Williams, an outreach coordinator for the M.T.A.’s Office of Work-Life Services.

“If you feel that you’re going to be stigmatized because you spoke to a counselor, I say, well, we have an alternative,” Ms. Williams said. “If you feel better talking with a chaplain, we’ll find you a chaplain that you will be most comfortable with.”

The program is a mix of M.T.A. workers who receive training to be chaplains, such as Ms. Morton, or outside clergy who volunteer their services to the agency.

Charles Rivera, a subway station agent, talked to a chaplain last May as the city was emerging from its deadly spring surge. Mr. Rivera, 56, never got sick, but after a potential exposure at work he had to quarantine at his Connecticut home. He couldn’t visit his children and grandchildren in Florida and was scared of infecting his 93-year-old father, who lives in Manhattan. 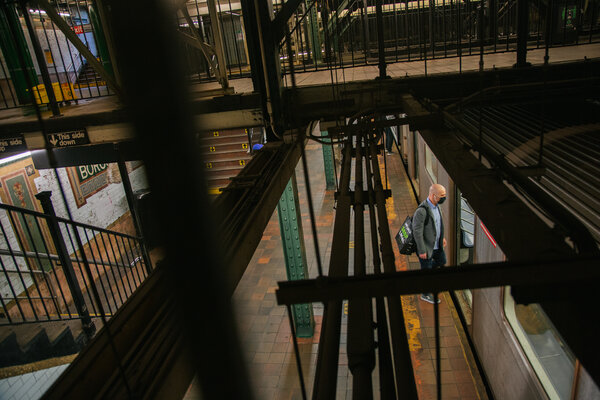 He was also worried about losing his job at a time when many of his fellow workers believed layoffs were a real possibility.

Mr. Rivera said he and the chaplain, who had stopped by his booth at the 68th Street-Hunter College station in Manhattan to distribute a pamphlet about the chaplain service, ended up speaking for over an hour, with the lack of passengers making it easier to chat.

They discussed everything from his upbringing to specific Psalms that resonated with him.

“He was very comforting to me, reassuring me things would work out,” said Mr. Rivera, adding that a family friend was placed on a ventilator after contracting the virus.

Mr. Lamorte said talking to Ms. Morton helped him deal with similar anxieties. His brother-in-law and a co-worker both had the virus and a friend he used to play racquetball with died of the disease. Mr. Lamorte had a lingering cough and tested positive for Covid three times before returning to work in late January.

Ms. Morton called to check in on him every few days and helped him with paperwork issues when he exceeded his sick leave and was concerned that his extended quarantine might affect his pay.

She also ended up consoling Mr. Lamorte’s wife, Patricia, and the two have become friends.

“When Frankie first got diagnosed, I was petrified,” Ms. Lamorte, 46, said. “She made me feel so relaxed and so calm, and to know that it will get better no matter what.”

Elizabeth Fisher, a station agent, got a call from Ms. Morton last April while she was quarantining at her Brooklyn home after contracting the virus.

Ms. Morton was calling in her role as a manager at the transit agency to ask how she was feeling.

But after Ms. Fisher, who has asthma, described a tightness in her chest so severe she was afraid she was going to die, the two ended up praying over the phone.

“I felt safe just knowing that I could have somebody that I can talk to as far as job-wise, and also spiritual-wise,” Ms. Fisher, 56, said.

Chaplains in many workplaces have become crucial during the pandemic, said the Rev. George Handzo, director of credentialing and certification at the Spiritual Care Association, a professional membership association.

Hospital chaplains, in particular, have absorbed much of the trauma of the past year, as hospitals overflowed and patients, many of whom were not allowed to have visitors in their rooms, sought solace as they neared death.

“We call it nonjudgmental presence,” said the Rev. Handzo. “This is not about pushing some religious dogma or other. It’s about listening.’’

That is how Ms. Morton, who has been a transit chaplain for 10 years, has approached what has been a grueling period.

“In listening to someone, it gives them a witness to whatever is going on,” Ms. Morton said. “Everybody always says they get a release because they were holding on to something and they wanted to tell somebody, but they didn’t want to tell someone who would judge them. So I’m not judging them. I’m not minimizing it. But I’m actually listening to it.”