(If you don’t already get California Today by email, here’s the sign-up.)

Danner Doud-Martin is not a climate change expert or a scientist. But she’s the person I wanted to talk to for Earth Day.

Ms. Doud-Martin works for U.C. Berkeley’s Haas School of Business, where she recently led a successful effort to make the school’s Chou Hall the “greenest academic building in the country.”

This year it was certified as TRUE Platinum Zero Waste, meaning the building sends almost nothing to the landfill. Like, ever.

“We encourage a ‘pack in, pack out’ mentality, like going into a forest,” Ms. Doud-Martin told me.

The building, which opened in 2017, has places to dispose of compostable material and to recycle, but as the economy behind recycling starts to collapse, environmental advocates are trying to encourage people to produce less waste to begin with. (See: efforts to ban plastic straws.)

Ms. Doud-Martin said that initially, it was tough to persuade harried students and overworked educators to get onboard.

“There were a lot of questions of: Does it matter if I put my trash in the solar bellies right outside,” she said. “What I’ve been telling people is, ‘It’s so you have to think about it.’”

For the most part, she said, they’ve come around.

Still, getting a whole building down to “zero waste” isn’t so simple.

There’s a cafe where students, teachers and staff pick up lunch, often to eat at their desks. That’s been tricky, too, she said.

Right now, customers are encouraged to bring their own containers. Snacks are sold in bulk rather than plastic-intensive packaging and there are no beverages in single-use bottles.

The final piece? Everyone has been asked to print a lot less — a tough task for a school that has previously run on hard copies of case studies.

Ultimately, it’s been satisfying, Ms. Doud-Martin said. She said she’s been fielding inquiries from others on the U.C. Berkeley campus, as well as representatives from schools around the state about the zero waste effort.

“People are definitely starting to focus their careers on sustainability and so forth,” she said. “People are looking at Haas and what we’re doing and maybe it means they come here versus Harvard, or versus Stanford.” 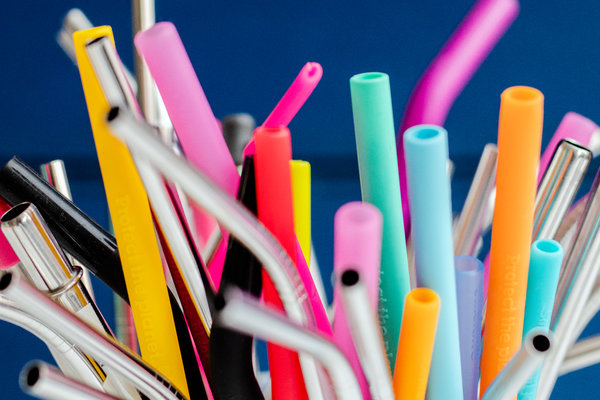 So what if you want to create less waste? Here are some tips from Ms. Doud-Martin:

1. Bring your own reusable cutlery, cups, napkins and grocery bags wherever you can. “I use linens, I always have a fork on me — I can always bust out that fork for you,” she said. While she used to return plastic grocery bags to the store, now that’s not an option, because, “there’s nothing to do with them.” So she tries to carry reusable bags for produce.

2. Learn what grade of plastic your city or county recycles. Here’s a guide to what the numbers mean.

3. Biodegradable does not mean compostable.

4. You might be able to recycle or compost unexpected things: You can compost a pizza box, and you can recycle foil, if you scrape the goop off.

[Here’s a helpful guide to reusable products from The Wirecutter.]

• With the most diverse field of presidential candidates ever, should a white man be the face of the Democratic Party in 2020? It’s a complicated question without a lot of middle ground. [The New York Times]

• House Democrats on Friday vowed to keep digging into the Mueller report, including with a subpoena for the unredacted version and its underlying documentation. Representative Nancy Pelosi said she and her colleagues would discuss what to do about the findings. [The New York Times]

• The Times’s editorial board writes that allowing a citizenship question on the 2020 U.S. census could profoundly reshape our representative democracy. This week, it’s an issue that’s set to go before the Supreme Court. [New York Times Opinion]

• Never mind that Nipsey Hussle had been lauded as a businessman and a philanthropist, mourned with a 25-mile procession. Days later, when Kerry Lathan was arrested, it was, officials said, because he had violated parole by associating with a known gang member: Hussle. [The New York Times]

• What makes speech harmful? When Mark Zuckerberg of Facebook asked the government to regulate content that’s violent or racist, some heard him asking legislators to infringe on the First Amendment. [The New York Times]

• The Oakland A’s have tentatively agreed to buy Alameda County’s stake in the Oakland coliseum for $85 million. [The San Francisco Chronicle]

• Kanye West has been a polarizing figure this past year. At his Coachella Sunday Service, though, Jon Caramanica writes, he made a powerful argument, once again, “for the spiritual impulse in secular spaces,” like a giant music festival. [The New York Times]

• A journalist writes about connecting with his mother, who was set to enter hospice, over making a Lent treat: capirotada. When she passes, he says, it’s a memory he will keep close. [The Los Angeles Times]

• The bassist for the L.A. band Chicano Batman released a cumbia record all about Original Tommy’s, a beloved chili burger stand that’s more than just a burger stand. [L.A. Taco]

We’ve been talking a lot about the desert lately, but if that’s too much of a haul for a weekend trip from wherever you live, you might instead consider a getaway to Mendocino County.

The Times just published a new “36 Hours” guide to the area about 90 miles north of San Francisco. Enjoy walking through redwoods? Perfect. Relish sweeping views of the Pacific? Who doesn’t? Wine and goat cheese and fancy pickles sound good? What about farm-to-table dining — emphasis on the farm?

It’s all there, plus quaint places to stay. But Mendocino, the piece notes, has managed to maintain a rural feel, even as the Bay has transformed. So maybe keep the existing community in mind if you do visit.