ST. LOUIS — It took Beriz Nukic about two years after landing on a new continent as a war refugee to open his own business.

Mr. Nukic learned English on the fly, and started with a simple concept — a Turkish coffee roastery for Bosnians, who drink Turkish coffee as though it is water. Soon he expanded the business into a deli, and then opened a restaurant, Berix, working 18-hour days and carrying a Bosnian-to-English dictionary in his pocket.

He did all that in Bevo Mill, a once-dilapidated neighborhood in the southern part of St. Louis that quickly became the stuff of American dreams. Where boarded-up windows had lined the streets and city development initiatives had never seemed to get off the ground, thousands of refugees fleeing brutal ethnic cleansing half a world away arrived in the 1990s with business plans and home renovations. They learned English, opened cafes and hair salons, and before long had brought life, color and the smell of fresh-baked bread to the area, which came to be known as Little Bosnia.

Amer Iriskic, 28, remembered moving to the neighborhood as a 7-year-old in 1998, three years after the end of the bloody civil war in Bosnia and Herzegovina. “People were outside all the time, and it was a nice atmosphere,” he said. He and his friends played basketball in the alley behind their house. His father and uncle opened a butcher shop, where they sold the cuts of lamb and veal their Bosnian customers missed and that other residents began to love as well.

For St. Louis, a city that had bled population for decades — it had about 400,000 residents in 1990, down from more than 800,000 in the 1950s — the influx of what was estimated to be the largest population of Bosnians outside Bosnia seemed to work magic. For the first time in generations, the urban narrative of abandoned houses, stagnant business and vanishing people appeared to be changing.

But it didn’t last.

Today, St. Louis, like some other Midwestern cities, is battling a new round of contraction, with a stagnant economy, challenged schools and one of the highest murder rates in the country. And over the past few years, the people who fled brutal violence and concentration camps in their homeland to create Little Bosnia have been fleeing again, to the suburbs.

A deadly hammer attack in Bevo Mill — in which Zemir Begic, a young Bosnian man out with his fiancée, was killed by four teenagers — shook the community in 2014. Bosnians marched in the streets, arguing that the police had not done enough to keep the neighborhood safe.

Semir Nukic, part of the family that owns Berix, recalled rowdy crowds leaving nearby bars, often causing trouble and getting into fights; the police would call the restaurant to ask for security camera footage. One night, he said, a man involved in a street fight was thrown through the restaurant’s window.

Mounting crime also worried Mr. Iriskic’s family. “People that we knew, friends and families, they got their houses broken into,” he recalled. His family heard that schools were better in the suburbs, and that he would be able to play there on a good soccer team.

One of the pioneers of the Bosnian exodus from the city was Beriz Nukic, who moved Berix from Bevo Mill, where it had become a local landmark, south to a shopping plaza he developed in the St. Louis County suburbs in 2010 — before the worst of the problems unfolded.

The Iriskices also moved south, and opened up a suburban location of their butcher shop three years later. 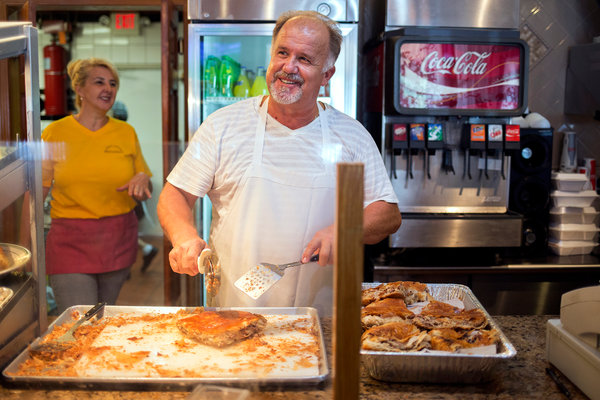 Since then, many of Little Bosnia’s flagship businesses have either moved away or closed. Bosna Gold, a large restaurant and event space whose cevapi sausages were said to rival those in Sarajevo, shut its doors in 2016. Salons, tailors, butchers and a host of other Bosnian establishments all joined the move out of the city, along with the Bosnians who frequented them.

Similar stories have been playing out in American cities since the Baby Boom decades of the 20th century, and have proven hard to reverse. After mass flights to the suburbs, even heavy investment in urban centers, with shiny new business districts and rapidly changing downtowns, have often failed to help cities, particularly in the Midwest, replace the residents they had lost.

In St. Louis the process has been particularly painful, because the people who were fleeing were the very ones who had been seen as saviors.

“Unfortunately, this huge opportunity we had with this large population of Bosnians living in the city, we have not maximized it,” said Antonio French, a former city alderman. “And over the last 20 years, we have lost most of them.”

Immigrant communities everywhere have spread to the suburbs. Many Chinese immigrants have moved to the San Gabriel Valley from the Chinatown neighborhood of Los Angeles, and Korean immigrants in the New York area have moved to the northern New Jersey suburbs and to Long Island. But the urban neighborhoods they were leaving behind were generally healthy or rejuvenating.

The Iriskices held on to their former home in St. Louis and now rent it out. But they said the neighborhood went into further decline after they left. “Whenever I go pick up rent, it’s not the same,” Mr. Iriskic said. “You don’t see kids walking, playing outside anymore, playing in the back alleys. There’s basketball hoops you can tell that haven’t had a basketball shot at them for years.”

At its peak in the late 1990s and early 2000s, the Bosnian population, including American-born Bosnians, reached about 70,000 in the city of St. Louis and the surrounding county, according to the International Institute of St. Louis, a charitable agency that sponsors many of the region’s refugees. Now, with some Bosnians having left the state entirely, the agency estimates that the figure is less than 50,000.

And while it’s hard to say exactly how many remain within the city limits, Anna Crosslin, the director of the institute, said, “I would not be surprised to know that it’s in the hundreds, not the thousands.”

To some extent, the dispersal of a once tight-knit refugee community is part of a normal process. Many Bosnians moved into Bevo Mill and other South City neighborhoods to be near the International Institute. They took English classes at the institute, relied on public transit to get around, and in the early going often lacked the money to buy a house with a yard. With time, though, many became upwardly mobile, and the suburbs became attainable and attractive to them.

Arina Galic, a seamstress trained in Bosnia who owns Arina’s Alterations, said the daily inconveniences of limited parking and crowded streets were what drove her to move to Mehlville, a suburb. Her customers appreciate her new location near a mall and two major highways, she said: “When I came here, everybody was so happy, because you’ve got better parking lots, you’ve got a good entrance.”

Many of the suburban transplants say Little Bosnia has not disappeared; it has merely shifted.

The shopping center where Berix is now located is also in Mehlville. Mr. Nukic rents space in the center to two other Bosnian-owned businesses. “We have a community together,” he said.

Two doors down is Lemay Meat, where the Iriskic family opened up the second location of their popular butcher shop and grocery store.

A Bosnian insurance agent’s office is in the same center. Across the street, a bank caters to Bosnian customers, and there is a Bosnian mosque down the road.

“When you want to step outside to take a breath, you see people sitting outside having coffee and stuff — it's really cool,” said Mr. Iriskic, who is now married with a son of his own.

St. Louis is now looking for new ways to make the South City area an attractive place to live for new residents, wherever they come from.

“In places like the Midwest, unlike the Northeast or California, you’ve got to convince people that it is a cool idea, not just to go to the inner city occasionally, but to live there and even raise kids there,” said Philip Kasinitz, director of the graduate program in international migration studies at the City University of New York. “That’s going to take a reversal of the last half-century of American thinking,” Mr. Kasinitz said.

City officials have not lost hope. The city’s public school system regained accreditation two years ago after a decade-long lapse. And a new violence reduction plan that has been used in other cities, Cure Violence, is gaining traction.

In Bevo Mill, several Mexican restaurants have opened recently, and a series of community workshops were held earlier this year, aimed at transforming Gravois Avenue into a more engaging and lively thoroughfare in the neighborhood.

Just to the east in the historic Chippewa Park neighborhood, a $12 million redevelopment project, involving dozens of apartment buildings and thousands of feet of commercial space, got underway last year. Another $19 million project turned a nearby YMCA into a luxury apartment building.

“I’m sorry that many of the Bosnians have moved on,” said Carol Howard, the alderwoman for the area that includes Bevo Mill. But she said she is not worried about the future of the neighborhood. She said she has noticed a new generation of young St. Louisians moving in who do not share their parents’ attraction to the suburbs.

“They want something they can walk to,” she said of the new residents. “If they want to go have a beer, they can walk, and they can push the baby in the carriage.”

Perhaps they will stay.