Tanisha Keller, a single mother who works for the federal Census Bureau, used to live paycheck to paycheck. Now, she is living nothing to nothing.

Payday would have come this week for Ms. Keller, 42, and many of the 800,000 other federal workers across the country caught up in the partial government shutdown. But as the standoff drags on, no paychecks are arriving to replenish their savings or pay down their maxed-out credit cards.

Ms. Keller’s bank balance has dipped to negative $169. She can no longer afford the $100 stipends she once sent to her son, Daniel, to help out with his college books and groceries. She does not know how she will make next month’s $1,768 rent on her apartment in Waldorf in Southern Maryland, or how she will cover the bills that automatically debit from her checking account, or even how she will gas up the car she has been trying not to drive.

“There’s no cushion,” she said. “When February rolls around, my rent’s going to be due, and I’m going to need the nation to help.”

Since Dec. 22, furloughed workers and those working without pay have been living off their savings, credit cards and the last paychecks that landed in their accounts.

But many of those wells are now dry. And as President Trump warns that the shutdown could last months or years if Democrats do not agree to fund his border wall, unpaid federal workers across the country, from the Washington suburbs to farming towns to remote federal prisons, are growing increasingly desperate and furious at the political impasse. They are now in shutdown survival mode: opening new credit card accounts to pay off their bills, borrowing from relatives and eating the dregs of their pantries.

“I have child support and rent, and I’ve told my landlord that any increase and I will have to move,” said Joseph Gudge, 41, an electronics technician who works for the federal government maintaining and inspecting air-traffic control safety systems at Seattle-Tacoma International Airport.

If the shutdown goes on long enough, when the hard reality of working without pay just can’t be sustained no matter what, he said he will have to quit.

A furloughed health-communications worker in Dallas applied for a temp job at his local Y.M.C.A. An international development worker in Washington, D.C., is scrounging for babysitting gigs. A wildland firefighter in western Colorado sold his truck to pay next month’s bills.

The timing of workers’ paychecks varies across the federal government, but many employees would normally receive a paycheck on Friday, according to a former official at the Office of Management and Budget. Others would normally be paid next week.

In Orlando, Fla., Joe Rojas, a federal corrections officer, is starting a side job driving for Uber to help make next month’s $2,000 mortgage payment.

“This weekend, family time is going to be Uber time,” he said. “Nobody signed up for this, to work for free. We knew the dangers of working in a prison. The reward was protecting society, getting a decent paycheck.”

While some government employees earn six-figure annual salaries, an average employee’s weekly take-home pay is about $500, according to American Federation of Government Employees, a labor union that represents about 700,000 workers. 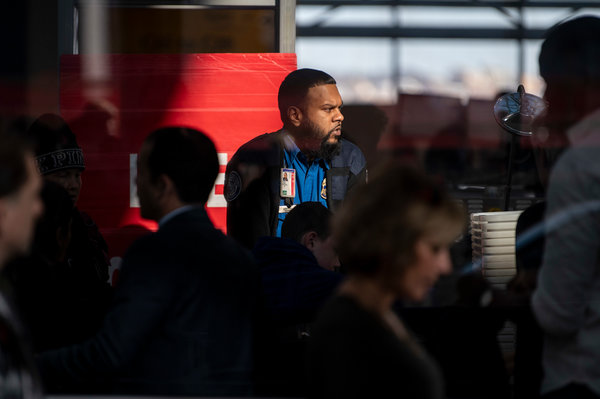 Shelly Carver, 57, a furloughed employee of the Internal Revenue Service in Ogden, Utah, said that she worried not just about paying her own expenses but also about helping her three adult children, who also work for the I.R.S. and have been furloughed. All would normally have been paid this Friday or next Monday.

Her older daughter — “single, and she does not have a backup” — has a mortgage payment due. Her son has a 5-month-old. Ms. Carver herself has $5,000 in savings that she had earmarked to help pay off $40,000 in credit card debt, but she is now planning to use it to help her children instead.

“They have no resources,” Ms. Carver said. But if the shutdown persists, she said, “I will be in the same boat as them.”

Belkys Colon, who turns 51 on Wednesday, makes less than $52,000 a year as an assistant investigator in the Office of Fair Housing and Equal Opportunity at the Department of Housing and Urban Development. She would normally be paid by direct deposit at the end of this week, and she is terrified about what missing this paycheck will mean. She is most afraid of not being able to pay the roughly $1,400 in rent for her apartment in the Bronx, and being kicked out on the street.

“I’m just scared that this is going to be for a long time, and I’m a single woman,” she said. “What is going to happen with me? Who could help me?”

For now, she is trying to spend as little money as she can. She is not buying any groceries except milk, and is cleaning out her cupboards to eat. She said she is mostly living on cereal, bread, crackers and other packaged foods — “stuff that you buy when you’re food shopping and nobody eats it.”

“At the moment I’m going to have to be very careful with what I have left,” she said.

For Angela Tucker, 44, who is working without pay as a corrections officer at a federal prison near Seattle, everything has become a balancing act.

“I’m on a lot of medications, because I’m a year out from being a breast cancer survivor, so I have to make the decision — do I refill all of my medications even before I need them, because I might not have the money later, or do I pay for the child care?” Ms. Tucker said. “Or do I buy food?”

The budget triage, Ms. Tucker said, comes down to setting priorities and muddling through. “What can I do without, what can I make stretch, what’s the most important need?” she said. “I’m putting only half a tank of gas in now. And all the other bills are just on a standstill — I just have to hope and pray that they’ll work with me.”

What makes things even more challenging, said Ms. Tucker, who has 15 years on the job, is that the prison is also short-handed. So people are not just being required to work one shift without pay, but often two in a row — 16 hours on the job.

“When we finally do get paid, we’re going to be trying to climb out of a big hole,” she said.

Matt Kampf, 49, a wildland firefighter in Montrose, Colo., should be getting paid on Saturday. The money would have gone to his mortgage, insurance, groceries — the normal costs of “trying to live that American dream.”

Instead, the Kampf family has pruned every expense they can. They have canceled travel plans and dropped Netflix, Hulu and Xbox subscriptions, cut out date nights and switched from Rice Krispies to the store brand. Mr. Kampf even sold his truck for $8,600 to keep paying for the house and keep the lights and heat on.

Like many federal workers, Mr. Kampf said he loves his job and the idea of working for something bigger than himself. But he does not know how many more payless paydays he can endure.

“The bite is truly there,” he said. “If this drags out till the end of January, I don’t know what we’re going to do.”