In close elections, rain or snow can suppress turnout. Friday morning’s snow, however, is expected to melt before Nov. 3. 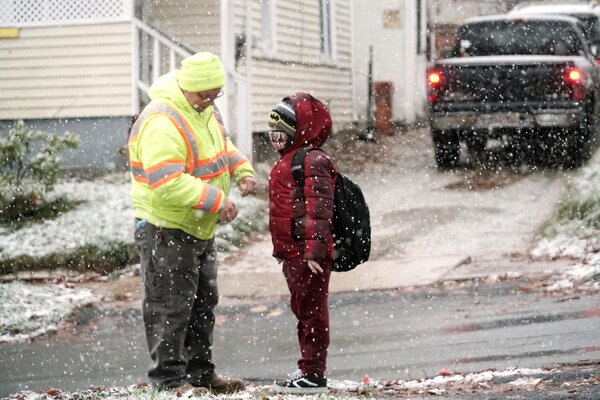 BOSTON — Fluffy, granular snow blanketed New England on Friday morning, accumulating up to four inches in some places and leaving roads slick and slushy, five days ahead of an election whose outcome is expected to hinge on voter turnout.

Both rain and snow are shown to depress turnout, but Friday’s snow is expected to melt over the weekend, with Election Day on Tuesday forecast as chilly but dry.

Early voting and campaigning has already been disrupted this week by the extremities of the weather: powerful Santa Ana winds fueled wildfires in Southern California and Hurricane Zeta knocked out electricity at some polling stations as it carved a path through the South.

But like New England, much of the country can expect clear skies on Election Day, with seasonably cool conditions in the Northeast and Upper Midwest, mild weather stretching through the South and over the Rockies and warm weather in store for Southern California. The Pacific Northwest, however, may be in for showers.

“Republicans should pray for rain” is an adage in American politics, suggesting that marginalized voters who tend to support Democrats are the most likely to be deterred by weather, and a 2007 analysis of 14 presidential elections published in the Journal of Politics seemed to bear it out.