If the United States attorney general sharply limits the power of the Justice Department to oversee police reforms in state and local jurisdictions, what becomes of Ferguson, Mo.?

The city, a suburb of St. Louis, is undergoing reforms under a so-called consent decree — an agreement between the Justice Department and a local jurisdiction, enforced by a federal judge, to overhaul a law enforcement agency that has been accused of abuses and civil rights violations.

Ferguson’s consent decree was enacted in 2016, two years after Michael Brown, an unarmed black teenager, was shot and killed by a white police officer there.

The agreement is one of 14 currently being overseen by the Justice Department. But last week, just before he was forced out of office, former Attorney General Jeff Sessions signed a memorandum strictly limiting their use.

Now, top political appointees must sign off on the deals, there are new limits on their scope and duration, and department lawyers must lay out evidence of additional violations beyond unconstitutional behavior.

Civil rights groups were quick to condemn the move, and the United States Commission on Civil Rights, a bipartisan federal agency, on Thursday urged the Justice Department to reverse course.

The memo signed by Mr. Sessions, a vocal critic of consent decrees for years, applies mostly to the enactment of new agreements. The existing consent decrees — in cities including Baltimore, Cleveland, New Orleans and Seattle — are still in place.

But critics worry that the memo sends a strong signal about the administration’s opposition to these agreements, leaving it up to federal judges and community groups to keep the reforms on track.

Felicia Pulliam, a civil rights activist who has been fighting for police reform in Ferguson for years, said she was not happy when she learned of the last-minute memo, but was not surprised, either.

“What Jeff Sessions did, people have been anticipating,” she said. “It makes you wonder how much of this abuse will be exacted against black folk and other communities of color before we, as a nation, make a decision that we are better than this.” 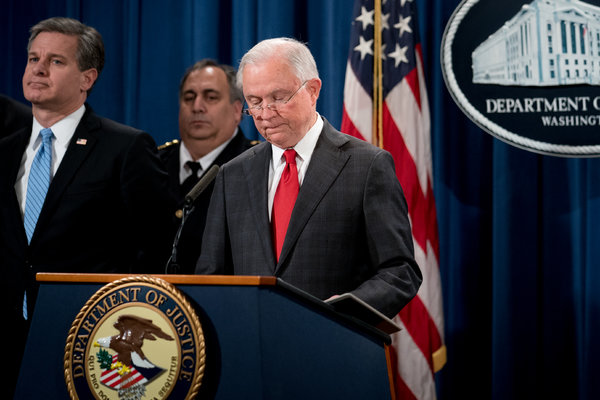 ‘Judges are going to be very important’

The Justice Department says existing decrees like the one in Ferguson remain under the purview of federal judges, and the memo will not affect the resources being devoted to those efforts.

The department is “committed to holding any officer or department responsible for violating the law without restraining the ability of good cops trying to do their part in reducing violent crimes,” a spokeswoman, Kelly Laco, said in an emailed statement this week.

But Christy E. Lopez, a former Justice Department lawyer under the Obama administration who is now a professor at Georgetown Law, said the memo could weaken existing consent decrees by making it even more clear that Justice Department officials are taking a hands-off approach.

And she pointed out that according to the memo, high-level approval is needed not only to establish a new consent decree, but also to make “any significant modifications” to the material terms of existing agreements.

The federal government’s use of consent decrees has long depended on who is in charge of the executive branch.

The decrees were made possible by a crime bill signed into law during the Clinton administration in 1994. One provision, Section 14141, allowed the attorney general to sue to eliminate unconstitutional conduct by law enforcement officers.

At the time, the police in Pittsburgh had been accused of targeting black people for arrest and abuse. A galvanizing moment came in 1995, when Jonny Gammage, a black businessman, died of asphyxiation during a struggle with white police officers in the suburbs. The Justice Department intervened by giving Pittsburgh the chance to avoid a federal lawsuit if it agreed to certain reforms.

That agreement — the country’s first federal consent decree for police reform — was reached in 1997.

The Justice Department backed away from the use of consent decrees under President George W. Bush. Under President Barack Obama, it made the agreements a vital part of its aggressive approach to addressing allegations of police misconduct.

Several major cities negotiated their consent decrees during President Obama’s second term, a period of widespread protests over police killings of unarmed black people. The agreements call on officers to form partnerships with community groups in Ferguson, receive training on de-escalation tactics in Baltimore and work to develop unbiased policing policies in Cleveland.

Consent decrees can last for years and cost cities millions of dollars. Their ultimate impact can be hard to discern because crime rates can go up and down for various reasons, and because it can be hard to measure and explain fluctuations in things like racial discrimination or feelings of safety.

Merrick Bobb, an independent monitor for the consent decree in Seattle and the executive director of the Police Assessment Resource Center, a law enforcement reform consulting organization, said the agreements were not perfect but had consistently yielded progress.

“All have been successful, at least for a time,” he said. “What the consent decrees intended to accomplish have, by and large, been fulfilled.”

Critics of the agreements say they are restrictive. The Fraternal Order of Police, the country’s largest police organization, applauded last week’s memo, saying it would “ensure that consent decrees will not be lengthy, open-ended arrangements with burdensome requirements or long-term negative impacts.”

“It’s a blame game,” he said. “Our officers on the street, the ones who have to interact with the community, are seen as the boogeymen. It is frustrating, and as a result of that, oftentimes consent decrees, however well-meaning, end up exacerbating problems between the police and the community rather than improving them.”

She added that public perceptions of the police regularly and significantly improved after consent decrees were put into place. She pointed to Los Angeles, where crime fell and residents’ attitudes toward the police improved markedly after a consent decree was imposed in 2001, according to a 2009 study from the Harvard Kennedy School.

Mr. Pasco argued consent decrees were not necessary, pointing to Cincinnati, where police reforms took place without that level of oversight from the Justice Department. Violent crimes as well as citizen complaints about the police decreased there after an agreement was reached in 2002, and the city was considered a trailblazer.

‘We are not dissuaded’

Ms. Pulliam said that progress under the decree in Ferguson had been a mixed bag.

She has seen more police officers mingling at community events. City leaders are more diverse. Officials are slogging through, and often dismissing, municipal court cases that have been severely backlogged for years. But she said the process still needed to be more inclusive and transparent, and she pointed to turnover problems: The police chief, who was himself preceded by two interim chiefs, is now stepping down after less than three years in office.

Ms. Pulliam added that she and other activists would keep pushing for the reforms they have sought for years. And she will keep working with Justice Department lawyers who are still on the case in Ferguson.

“We knew that it was going to be a challenge, and we are not dissuaded,” she said. “Everybody’s exhausted. It’s exhausting. It’s difficult. But we’re still in it.”

Mr. Bobb said he was optimistic about the future of consent decrees — even new ones — in part because memorandums like the one signed by Mr. Sessions can be rescinded.

“I have been doing this police reform work for nearly 30 years, and I’ve seen the ups and downs,” he said. “When those currently in power move on, the good that consent decrees have accomplished — the lives that have been saved and the beatings that have been avoided — those things will revive the program. It’s not going to go away.”