Joanna Harcourt-Smith was a 26-year-old European socialite in Switzerland in 1972 when she met Timothy Leary, the psychedelic Pied Piper to the flower children of the 1960s.

He was 52 and a fugitive from justice, having escaped from prison in California where he was serving a 10-year sentence on drug charges. Ms. Harcourt-Smith was instantly enthralled — not just by his canary yellow Porsche 911 Targa but also by his mesmerizing eyes and his promise of psychological freedom.

“You are looking for a way out of the decadent aristocratic game, the limbo of Jet Set desperados,” he told her. “I’ll show you the way.”

After weeks of LSD-fueled adventures, they headed for Afghanistan. But on landing, they were taken into custody by American agents and returned to the United States, where Mr. Leary was again imprisoned. Ms. Harcourt-Smith stood by him and pressed for his release, which came three and a half years later. By then they had both changed and soon after they broke up. She was 30 and ready to start her life over.

Her daughter, Lara Tambacopoulou, said the cause was breast cancer.

Ms. Harcourt-Smith may have been a footnote in Mr. Leary’s event-filled life — he was married multiple times, though never officially to her, and she was not mentioned in his 1996 obituary in The New York Times — but he loomed large in hers, though she too was married multiple times. It took her three decades to absorb and “compost” her experience with him before she published her memoir, “Tripping the Bardo with Timothy Leary: My Psychedelic Love Story,” in 2013.

“I followed him off that precipice, and my family, nationality and sanity were fragmented beyond recognition,” she wrote.

Joanna Marysia Harcourt-Smith was born on Jan. 13, 1946, at the Palace Hotel in St. Moritz. Her mother, the immensely wealthy heiress Marysia (Ulam) Krauss Harcourt-Smith, was playing bridge there when she went into labor 10 weeks early. After 43 hours, she gave birth to Joanna, who weighed less than three pounds.

Joanna’s father, Cecil Harcourt-Smith, a commander in the Royal Navy, was not a presence in her childhood and died when she was 10.

“Many times,” Ms. Harcourt-Smith wrote, “my mother told me that I was a mistake from the moment I was conceived, never making it exactly clear whose mistake.”

Joanna attended a Catholic boarding school outside of Paris. (She was Jewish, but her mother, who had lost several relatives in the Holocaust, forbade her from saying so.) She was sexually abused by her mother’s chauffeur; she told her mother about it, but she didn’t believe her and told her, “A good chauffeur is hard to find.”

As a young woman, Ms. Harcourt-Smith immersed herself in drugs and promiscuity, including a stint with the Rolling Stones. Around the same time, Mr. Leary, the high priest of LSD, who was 26 years her senior, was urging people to “turn on, tune in and drop out.”

A psychologist, he had been fired in 1963 from Harvard, where undergraduates had shared in his stash of psychedelics, though these drugs were not illegal at the time. He also faced multiple outstanding indictments, most on minor drug charges, and was eventually imprisoned.

His wife at the time, Rosemary Woodruff Leary, aided by the radical Weather Underground, helped orchestrate his escape from the California Men’s Colony at San Luis Obispo in 1970, and the two fled to Algeria, where they stayed with Eldridge Cleaver, the Black Panther leader. 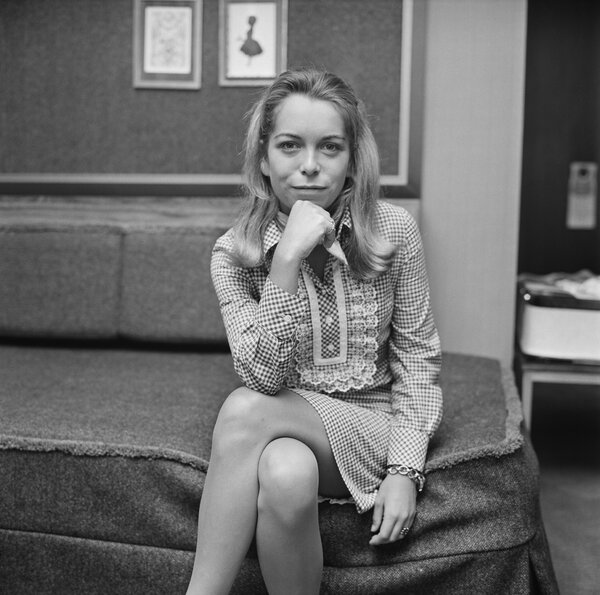 Switzerland did not want to harbor the fugitive Mr. Leary, whom President Richard M. Nixon had called “the most dangerous man in America,” and did not extend his asylum there. So he and Ms. Harcourt-Smith hit the road, first to Vienna, then Beirut. An informant tipped off the authorities about their travel plans, and when they landed in Kabul, they were rerouted to the United States.

Ms. Harcourt-Smith was not charged with anything but insisted on staying with Mr. Leary and was held as a useful asset until they arrived in California, where she spent the next three and a half years trying to free him from prison. All the while she was a confounding figure.

“Neither the counterculture nor the prosecutors and prison system knew what to make of her,” Michael Horowitz, Mr. Leary’s archivist, said in a 2017 interview.

“Her outspoken, upper-class European manner put people off,” he said. “She had an edge and knew how to get her way. Tim empowered her, and she in turn was tremendously loyal to him, dedicated to getting him out — whatever it took. Alienating many in the counterculture was the fallout from that.”

As a condition of Mr. Leary’s release, he and Ms. Harcourt-Smith agreed to become federal informants. Mr. Leary’s followers were outraged and blamed her for their guru’s becoming a traitor to the cause. The poet Allen Ginsberg branded her “a C.I.A. sex provocateur.”

She always insisted that turning state's evidence was not her idea, that Mr. Leary had told her to tell the government that he was ready to cooperate, and that she was being scapegoated.

In any case, Mr. Leary was released in 1976. Anger at the pair was so great that the government put them in the witness protection program for their own safety and they lived for a time outside Santa Fe under the aliases James and Nora Joyce.

But by then, they were wearing on each other. His years in solitary confinement had damaged him, she wrote. They were both alcoholics and fought all the time before splitting up.

Ms. Harcourt-Smith moved to the Caribbean and lived on a sailboat for a few years. She stopped drinking and taking drugs in 1983 and settled in Santa Fe, where she began life anew.

“I felt like a child who grew up in the forest,” she said in an interview with Susun Weed, an herbal health expert. “I had to relearn everything,” she said, adding: “I had so much shame and guilt that I could barely write.”

In the late 80s she began to reconcile with her daughter, whom she had not seen for 15 years, from the time her daughter was 5.

Ms. Tambacopoulou said in a phone interview that her mother had been “extremely traumatized” by her experience with Mr. Leary, “but we were both absolutely determined not to let the events of her life destroy us.” Over time, they found peace with each other.

In 2006 Ms. Harcourt-Smith and Jose Luis Gomez Soler, a mystic from Spain, founded a website, futureprimitive.org, and she began hosting a podcast in which she interviewed authors and innovators.

She and Mr. Soler married in 2009. In addition to him and Ms. Tambacopoulou, Ms. Harcourt-Smith is survived by two sons, Alexis d’Amecourt and Marlon Gobel, and three grandchildren.

“She grew and transformed enormously over the course of her life and became an inspiration to many in her later years,” Cynthia Jus, a Buddhist teacher and longtime friend in Santa Fe, said in an email, adding, “I would love for people to know who she became, not who she was.”