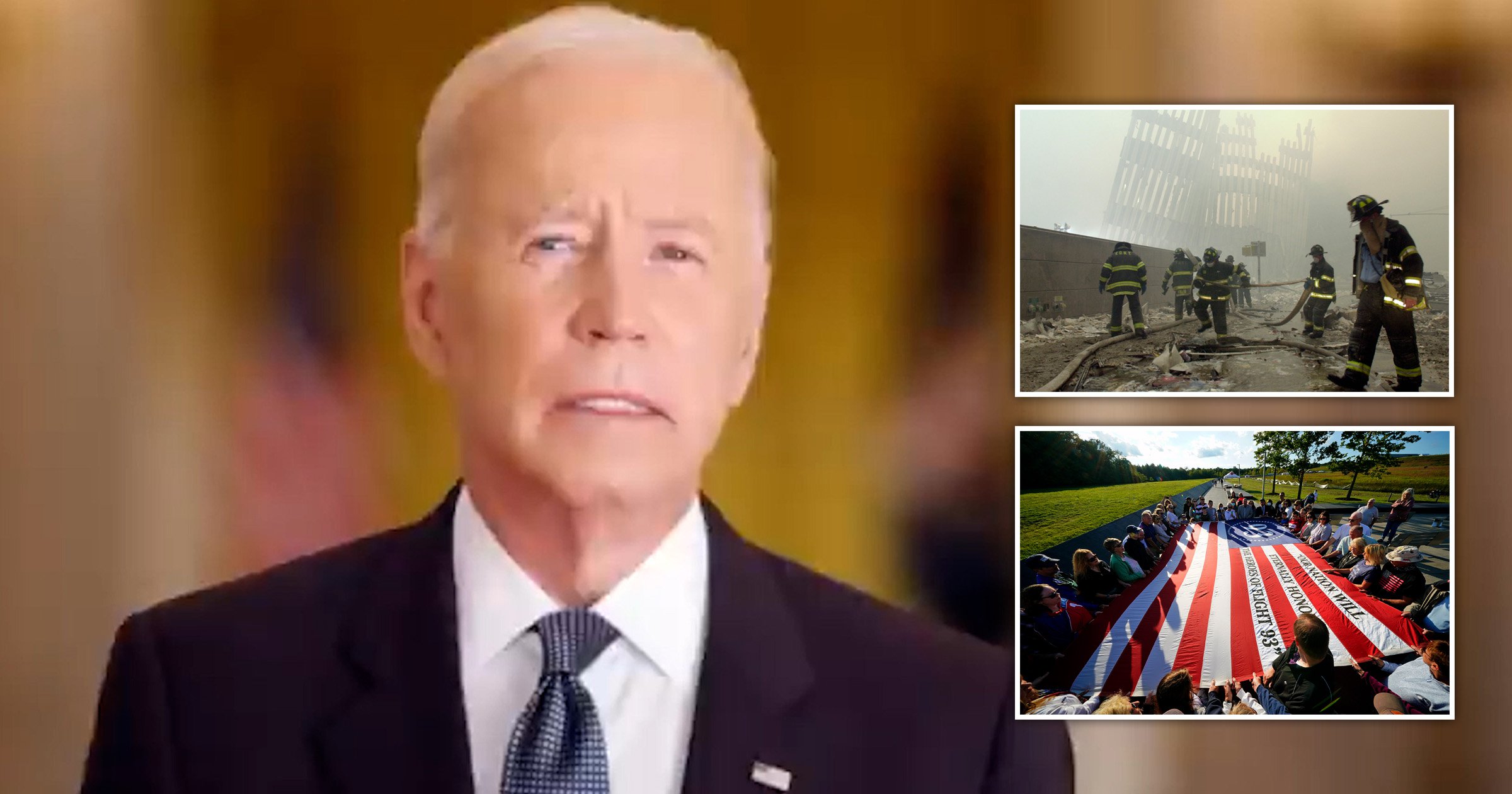 US President Joe Biden commemorated the 9/11 attacks by calling for his politically divided country to show unity and have faith in each other again.

The US’s worst-ever terror attack, killing 2,996 people, happened 20 years ago today. Joe Biden addressed the nation for the anniversary – through a taped address released on Friday.

The main message of his speech was for people in the US to come together because ‘unity is (America’s) greatest strength’.

He started by telling the story of his friend, Davis, who lost his oldest son when the towers came down on the first anniversary for his youngest son’s death.

Mr Biden said that even after these horrific tragedies Davis wanted Mr Biden, who was a senator at the time, to tell people: ‘Don’t be afraid’.

The president went on: ‘The absolute courage it took after two unimaginable losses is extraordinary, yet the most ordinary of American things.

‘To know that life can be unfair and uncertain. A cruel twist of accident of a deliberate act of evil. But even in darkness – to still be the light.’

Mr Biden told any mourning citizens they were in his and his wife’s heart today, before going on to make his point.

He said: ‘The days that followed September 11, 01, we saw heroism everywhere. In places expected and unexpected. We also saw something all too rare – a true sense of national unity.

Remembering the rise in Islamaphobic discrimination that followed the attacks, Mr Biden said: ‘We saw a national unity bend. We know that unity is the one thing that must never break.

‘Unity is what makes us who we are – America at its best. To me, that at is the most central lesson of September 11 – is that at our most vulnerable, in the push and pull of all that makes us human, in the battle for the soul of America, unity is our greatest strength.

‘Unity doesn’t mean we have to believe the same thing. We must have a fundamental respect and faith in each other and this nation.’

Mr Biden arrived in New York on Friday night as the skyline was illuminated by the ‘Tribute in Light’ – hauntingly marking where the towers once stood.

His first stop on Saturday was to be the National September 11 Memorial, where the twin towers of the World Trade Centre were toppled as a horrified world watched on television.

From there he was to visit the field near Shanksville, Pennsylvania, where a plane fell from the sky after heroic passengers fought terrorists to prevent it from reaching its Washington destination.

And finally, he was headed to the Pentagon, where the world’s mightiest military suffered an unthinkable blow to its very home.

Boris Johnson and Sir Keir Starmer have also commemorated one of the worst-ever attacks on the western world.

In a defiant message to be played a memorial event at the Olympic Park in east London on Saturday, the Prime Minister said the threat of terrorism remained but people refused to live their lives in ‘permanent fear’.

‘The fact that we are coming together today – in sorrow but also in faith and resolve – demonstrates the failure of terrorism and the strength of the bonds between us,’ Mr Johnson said.

Labour leader Sir Keir said the consequences of the attacks were ‘still being felt to this day’, adding the tragedy was ‘still so raw’.

He said: ‘But as we mark this anniversary I’m convinced our resolve has never been stronger.

‘We will continue to fight terror and violence, by promoting our values of justice and peace.’