Joe Biden has made his inauguration speech after being sworn in as the 46th president – but how did it compare to previous US leaders?

Most presidents use their speech to talk about themes and are generally short on specifics – but not all.

Sky News looks at Mr Biden’s speech, and back at the previous three presidents’ addresses. 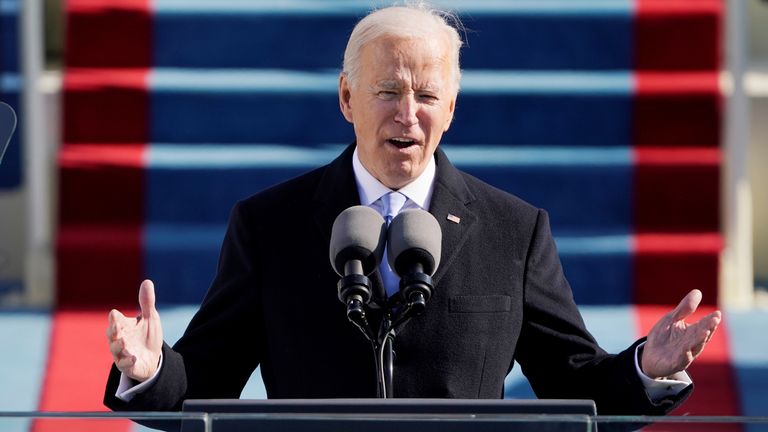 Mr Biden was sworn in as president following a fractious election campaign, held during the COVID-19 pandemic, after which he won both the popular vote and the electoral college vote.

His predecessor, Donald Trump, did not attend his inauguration and has repeatedly claimed the election was stolen from him.

The overwhelming theme of Mr Biden’s speech was unity and the victory of democracy.

He promised to serve those who voted for him and those who did not, saying he was there for all Americans.

“All”, “America”, “nation”, “people”, “unity” and “democracy” were some of the words used repeatedly by Mr Biden, with “all” said 24 times, the most use of one word by a president in their inauguration address.

He used “unity” in nearly every sentence in one section of his speech.

“Fellow Americans”, “one another”, “one nation”, “whole soul”, “common object”, “great nation” were some of his most used phrases.

In the wake of the Capitol riot, soaring coronavirus deaths and a divided nation, the new president sought to bring unity to the country by talking about how “democracy has prevailed”.

He spoke about getting people out of unemployment, safer schools, overcoming the virus, rewarding work and rebuilding the middle class as well as making healthcare “secure for all” – something he supported while serving as Barack Obama’s vice president.

And he also sought to mend the divisions in a nation that he said has seen white supremacy rise, the truth attacked, systemic racism and the climate in crisis, by saying “America is so much better than this”.

Mentions of other presidents

His faith ran through his speech, with a reference to St Augustin, a saint associated with his church, a bible quote on how things will get better and a moment of silence to pray for those who have lost their lives to COVID-19.

Mr Biden ended his speech by saying “with purpose and resolve” he will serve the country “we love with all our hearts”.

“May God bless America and may God protect our troops. Thank you America,” he concluded. 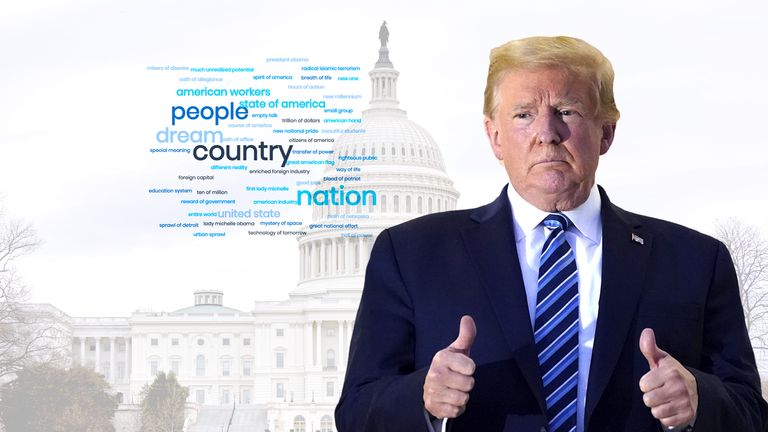 The businessman and television personality lost the popular vote but won the electoral college vote after a highly contentious campaign against Hillary Clinton.

He made history as the oldest person to take office and was the first president to have never served in the military or hold any government office before becoming president.

His inauguration speech was noted for its short, sharp sentences, much like the sound bites he likes to give at his rallies.

Mr Trump’s speech was accusatory in much of its tone, saying he was giving hope to those who had been forgotten.

“America first” was at the core of his speech and, unlike most inaugural speeches, he used it as another chance to highlight specific issues.

“America” was the most used word by far, with “American”, “people”, “country”, “dream” and “nation” used many more times than other presidents used individual words – apart from Mr Biden.

“Make America”, “bring back”, “American workers” and “state of America” were his most used phrases.

Mr Trump promised a new era in American politics, deriding the Washington elite and saying America “belongs to you”.

The economy was a big focus in Mr Trump’s speech, with “America first” being his resounding message as he criticised the US for making “other countries rich”.

He depicted America as being full of abandoned factories, economic anger, rising crime and dystopian “carnage” and said how he would give a helping hand to those who had been forgotten.

Mentions of other presidents

Mr Trump thanked presidents Carter, Clinton, Bush and Obama, who were all present at his inauguration.

But he, first of all, thanked Chief Justice Roberts, who swore him in – something the two previous presidents did not do.

Mr Trump says he identifies as a non-denominational Christian and in 2015 said he attended the church his parents joined, but the church said he “is not an active member”.

He first mentioned religion about three-quarters of the way through his speech, quoting the bible by saying: “How good and pleasant it is when God’s people live together in unity.”

He mentioned God one other time before signing off with “God bless you and God bless America”. 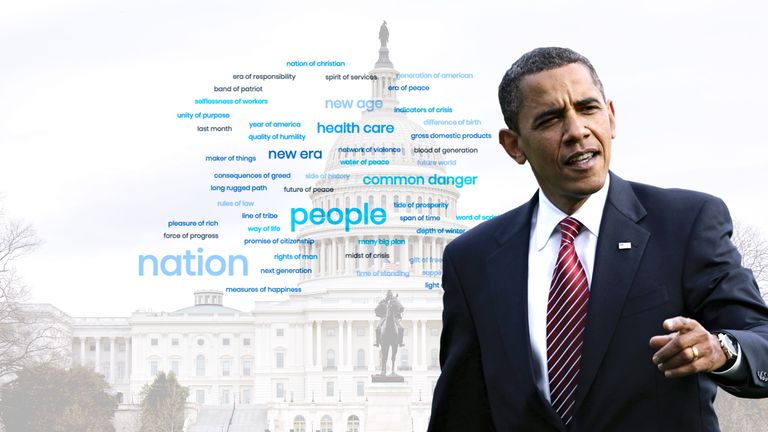 Acknowledging this, he noted how his father less than 60 years ago might not have been served in a restaurant but he “can now stand before you to take a most sacred oath”.

The overwhelming theme was that a reboot was needed for the US, as Mr Obama listed what he believed to be the country’s failures – including “10 years of war”, a not so subtle dig at George W Bush and the Iraq War.

His words then turned to hope, using the country’s past to highlight how immigrants built the nation and “saw America as bigger than the sum of our individual ambitions”.

One of the most quoted sentences of his address is: “Starting today, we must pick ourselves up, dust ourselves off and begin again the work of remaking America”.

And “founding fathers”, “new age”, “common danger” and “health care” were some of his most used phrases.

An end to plutocracy was one of the main issues Mr Obama addressed, as he warned Americans “have duties to ourselves, our nation and the world”, as he had a dig at “those who prefer leisure over work, or seek only the pleasures of riches and fame”.

The environment also featured, with calls for renewable energy to be harnessed and for science to be “restored to its rightful place”.

The 44th president also pushed a return to soft power, saying the US had lost its way with Guantanamo Bay and “black” CIA detention sites, promising the world “we are ready to lead once more”, and not by “power alone”.

He directly said the US would begin to “responsibly leave Iraq”, and added that the US would defeat terrorists.

Pragmatism was an overriding theme, with a promise to pursue government programmes when they worked and axe them when they did not, while he added that market forces “can spin out of control” without a watchful eye – a nod to the financial crisis of the time.

Mention of other presidents

Mr Obama thanked Mr Bush for his “service to the nation as well as the generosity and cooperation he has shown throughout this transition”.

But, it was notable that he did not start with that, instead he began with: “My fellow citizens.”

Mr Obama is a practising Christian, but this did not stop allegations that he was secretly a Muslim – theories that escalated during his presidency.

During his speech, he referenced the bible very early on, saying: “The time has come to set aside childish things.”

He mentioned God a few times during his speech, but also said how the US was “a nation of Christians and Muslims, Jews and Hindus, and non-believers”.

And he specifically addressed the Muslim world, saying: “We seek a new way forward, based on mutual interest and mutual respect.”

Mr Obama addressed America directly, with a message of “hope and virtue”.

He said: “Let it be said by our children’s children that when we were tested we refused to let this journey end, that we did not turn back nor did we falter; and with eyes fixed on the horizon and God’s grace upon us, we carried forth that great gift of freedom and delivered it safely to future generations.” 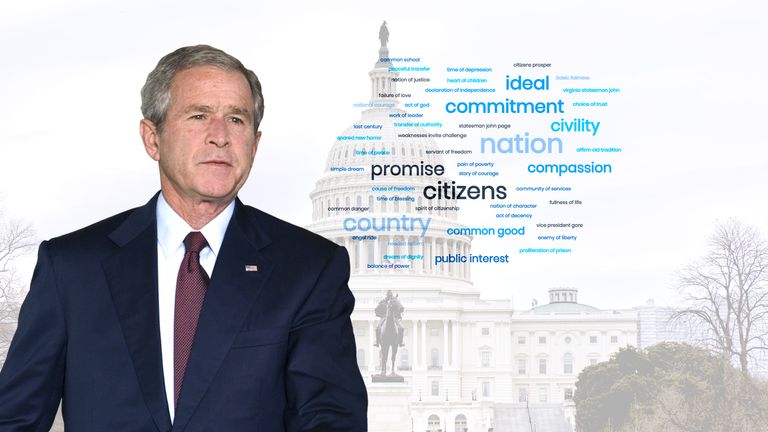 George W Bush’s inauguration came after one of the closest elections in US history, in which he lost the popular vote to Al Gore but won the electoral college vote – but not for more than a month after voting ended.

Following the disputed election results, Mr Bush made a call for national unity and focused on the ideals of the American way of life.

He acknowledged that while many Americans were prosperous, “others doubt the promise, even the justice, of our own country” – and pledged to “build a single nation of justice and opportunity”.

“Citizens”, “country”, “nation”, “America”, “common good” and “public interest” were the most heavily featured words and phrases throughout his speech as he drew on the US being a democratic leader in the world.

“Compassion”, “promise”, “civility”, “commitment” and “ideal” were also some of his most used words.

While Mr Bush’s speech followed the norm of being more thematic than about issues, he did get some of his proposals in.

Educational reform, a campaign promise, was mentioned as he said: “We will reclaim America’s schools, before ignorance and apathy claim more young lives.”

Social security and Medicare were also mentioned as he promised to reform them, “sparing our children from struggles we have the power to prevent”.

He also highlighted his pledge to reduce taxes by $1.6 trillion over 10 years, saying it would “reward the effort and enterprise of working Americans”.

And less than two years before he authorised the Iraq War, he promised to build up a stronger military and “confront weapons of mass destruction”.

Mention of other presidents

Bill Clinton was thanked by Mr Bush, as was his opponent Mr Gore, with a nod to “the peaceful transfer of authority”.

A deeply religious man, Mr Bush drew on his Christian faith throughout his speech.

Among those references, he said he knew his goals were within reach “because we are guided by a power larger than ourselves, who creates us in his image”.

And he used a biblical reference as he pledged: “When we see that wounded traveller on the road to Jericho, we will not pass to the other side.”

Towards the end of his speech, Mr Bush told how Virginia statesman John Page wrote to Thomas Jefferson after the Declaration of Independence was signed and asked: “Do you not think an angel rides in the whirlwind and directs this story?”

Ending his speech, he said: “This work continues. This story goes on. And an angel still rides in the whirlwind and directs this story

“God bless you all, and God bless America.”