In the past week, two prominent political analysts in the US have revised their predictions for the November election. 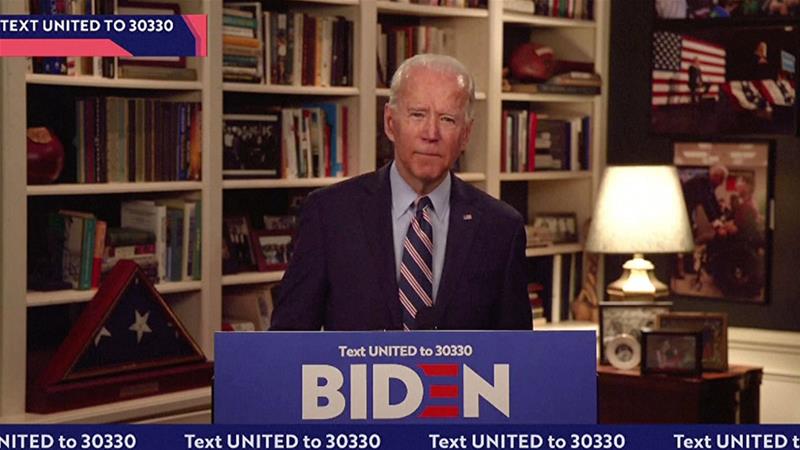 His campaign for president upended by the coronavirus, former Vice President Joe Biden emerged from the political shadows to address his supporters openly for the first time in nearly a week on Monday and called on the president to move faster to contain the pandemic.

“Let me be clear: Donald Trump is not to blame for the coronavirus, but he does bear responsibility for our response and I, along with every American, hope he steps up and starts to get this right,” said Biden, who is currently the frontrunner to challenge President Donald Trump in the November general election. “No, this isn’t about politics. This is simply too much at stake, too many lives, too many livelihoods, too many homes and families and businesses and communities at risk.”

The address was billed as the first in a series of “shadow briefings” on the coronavirus and the government’s response to it. Biden spoke for 15 minutes from the basement recreation room of his Wilmington, Delaware, home where campaign officials have constructed a makeshift television studio.

On Tuesday, Biden is scheduled to use the new studio to make an appearance on “The View” on the ABC television network.

The outbreak has thrown the Democratic nomination process into chaos and left campaign officials of all stripes scrambling to come up with alternatives to the traditional methods of courting voters. At least 13 states have postponed voting, and more delays are possible as health officials warn that social distancing and other measures to contain the virus might be in place for weeks, if not months.

Senator Bernie Sanders, who is still challenging Biden for the Democratic nomination, is using online addresses to try to stay in the news. The most recent was a Sunday evening effort that included several guests, including progressive congresswoman Alexandria Ocasio-Cortez of New York.

The crisis has propelled Trump recently to give daily briefings with news outlets nearly every day in the White House briefing room, a place he had largely avoided during his first three years in office. The addresses, so far, have veered between upbeat assessments of his administration’s handling of the crisis, attacks on the media and updates from public health authorities.

With the briefings, Trump is attempting to reposition himself from a political street fighter into a “wartime president” guiding the nation through one of its darkest hours. The effort floundered at first, with his approval ratings inching downward, but they have since rebounded.

Two polls released late last week showed a majority of Americans supporting the president’s handling of the crisis, but another released on Monday by Monmouth University found 48 percent standing by the president and 46 percent unhappy with his work.

In the past week, two of the most prominent political analysts in the US have revised their predictions for the November election and said Biden now enjoys an edge over Trump on the electoral college map. 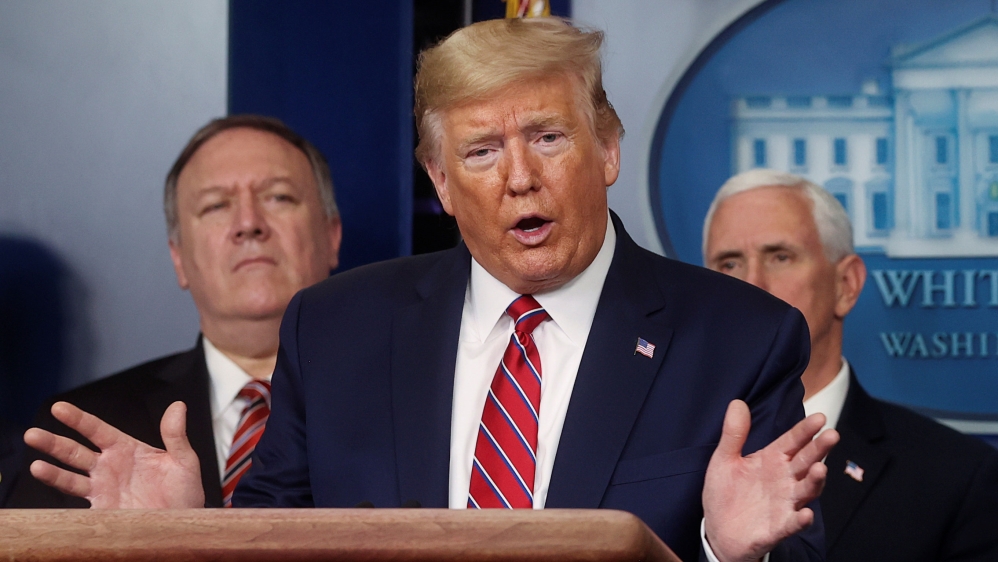 “The President is an underdog now in his bid for a second term,” Stu Rothenberg, founder of the Rothenberg Political Report, wrote in a column published late last week. “That doesn’t mean he can’t win. It simply means that he is in a more difficult place than he was before, in part because Democrats have united behind a consensus candidate who has potentially broad appeal.”

In Monday’s address, Biden used his new platform to criticise Trump for not getting out ahead of the pandemic and downplaying the dangers in the early going.

“For too long, the warning signs were ignored. For too long, the administration said the threats were, quote, under control, quote, contained, quote, like the flu,” Biden said. “The president says no one saw this coming. Well, that’s just not accurate.”

Biden called on the president to be more forthcoming in the briefings in the days and weeks ahead.

“Later today, you’ll hear from the president in his daily briefing. These briefings are an important opportunity to inform and reassure the American public. They’re not a place for political attacks or to lash out at the press; they’re about the American people,” Biden said.

“I hope today, and in the days ahead, the president will give us the unvarnished truth” he added. “That’s what the American people need and what they deserve.”

Since his victories in last week’s primaries in Illinois, Florida, and Arizona, Biden has kept a low profile and spent much of his time at home in Delaware making calls to legislators and meeting with advisers. Monday’s address is seen as an effort to appease critics who have challenged him for not taking a more public stance during a national crisis.