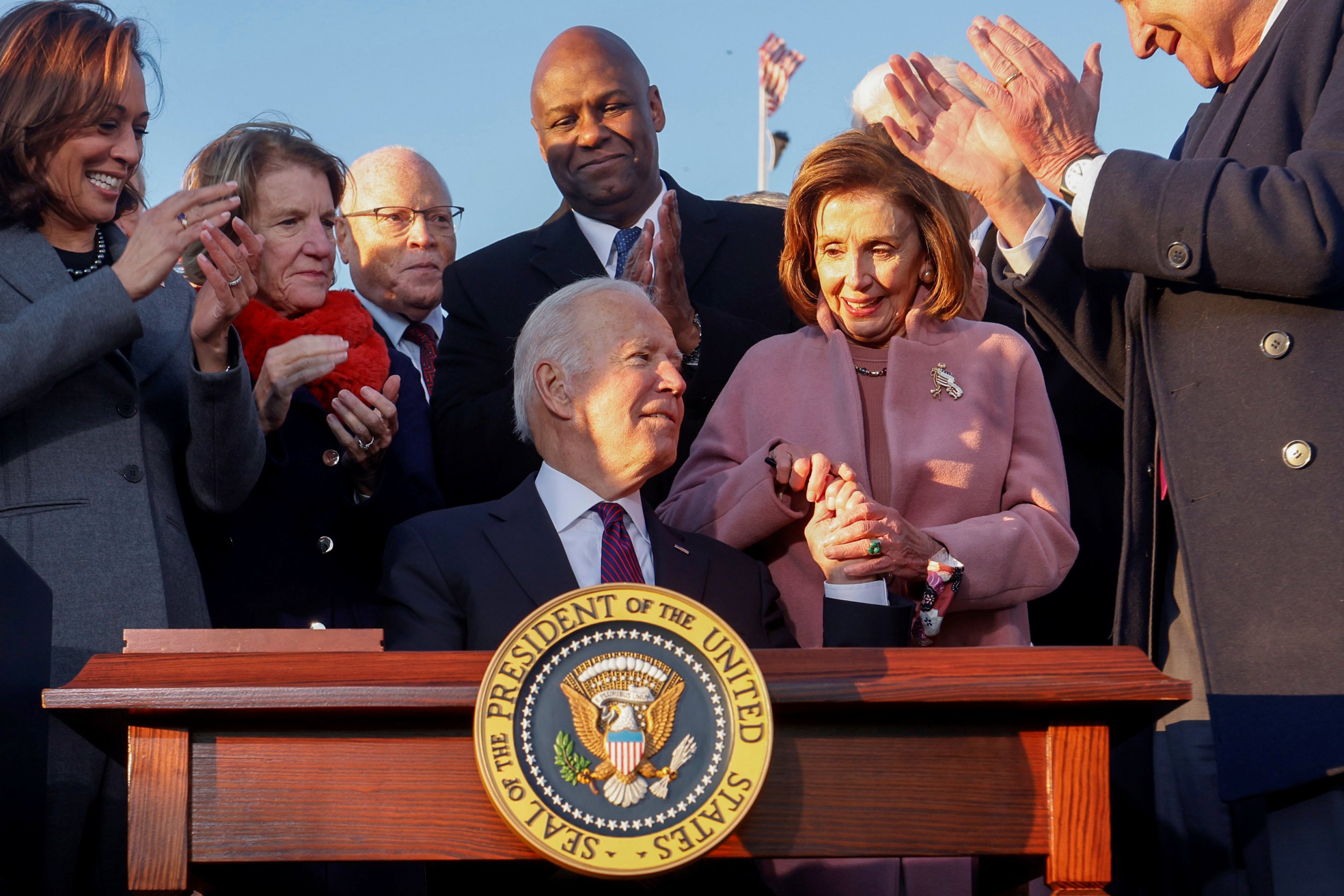 President Joe Biden has promised that the massive infrastructure bill he signed into law will make life ‘better’ for Americans, ahead of touting his biggest legislative victory to date on the road.

Biden signed the $1trillion dollar infrastructure deal into law on Monday, solidifying a key component of his Build Back Better agenda. It will provide billions to states and local governments to update roads, bridges and transit systems.

‘Today, we are finally getting this done,’ Biden declared in front of about 800 guests on the White House South Lawn on Monday.

‘So my message to the American people is this: America is moving again. And your life is going to change for the better.’

The president and members of his Cabinet will be taking off to different parts of the country to showcase the legislation. Biden will visit a 82-year-old steel bridge in Woodstock, New Hampshire, on Tuesday afternoon and will then travel to Detroit, Michigan, on Wednesday to promote the new law as a source of jobs and repairs for aging infrastructure.

‘As he goes around the country, he’s really going to dig into how these issues will impact people’s everyday lives, what they talk about at their kitchen tables,’ said White House Press Secretary Jen Psaki.

The bridge Biden will visit on Tuesday was built in 1939 and carries state Route 174 over the Pemigewasset River. The bridge has been on the state’s ‘red list’ since 2014 due to its poor condition, and another bridge over the river was added in 2018.

‘The president is going there because there is a broken-down bridge that needs to be repaired,’ Psaki said.

New Hampshire Governor Chris Sununu sent a letter to Biden on Tuesday asking him to work with Congress to get the state even more funding for infrastructure. The Republican governor also urged the president to address supply chain issues, workforce shortages and the rising cost of construction materials.

‘Ensuring that roads get built, bridges get repaired, and drinking water gets improved will be even more challenging given the economic challenges Washington seems oblivious to,’ Sununu said.

Under the funding formula in the bill, New Hampshire will receive $1.1billion for federal-aid highways and $225million for bridges, the White House said.

With the law, Biden says he has delivered on two key campaign promises: his vow to broker bipartisan legislation and his pledge to get major legislation to provide funding for public works projects that his predecessors from both parties failed to provide.

According to the White House, 173,000 total miles or nearly 280,000 kilometers of US highways and major roads and 45,000 bridges are in poor condition. With nearly $40billion dedicated to fixing bridges, it is the single largest investment in bridges since the construction of the national highway system, Biden’s administration said.

How the money is spent will mostly be left to state governments. But Biden has named former New Orleans Mayor Mitch Landrieu as the liaison between the White House and states to ensure funds are properly utilized.

The long-awaited bipartisan deal, left the president to choose between his promise of fostering national unity and a commitment to transformative change. While the final bill whittled down much of his initial vision, the Biden administration remains hopeful they will be able to deliver success through the compromise.

‘Folks, too often in Washington, the reason we didn’t get things done is because we insisted on getting everything we want. Everything,’ Biden said on Monday.

‘With this law, we focused on getting things done. I ran for president because the only way to move our country forward in my view was through compromise and consensus.’

There may be little hope for future bipartisanship ahead of the 2022 midterm elections, as Biden pivots back to more difficult negotiations over his broader $1.85trillion social spending package.

The bill received support from 19 Senate Republicans and 13 House GOP members, despite strong opposition from former President Donald Trump and GOP leaders who linked it to a larger partisan domestic spending package.

Biden hopes to use the infrastructure law to build back his popularity, which has taken a hit amid rising inflation and the inability to fully shake the public health and economic risks from Covid-19.