MIAMI — The chief state judge in Broward County, Fla., urged the lawyers involved in the battle over the state vote recount on Monday to “ramp down the rhetoric” and take any accusations of electoral fraud where they belong: to the police.

Chief Circuit Judge Jack Tuter refused a request by Gov. Rick Scott to order the county police to impound voting machines and ballots when they are not in use, but both parties accepted his recommendation to add security in one of Florida’s most hotly contested vote counts in years.

Imploring all parties to tone down their statements, the judge was critical of comments made by Mr. Scott’s lawyers on television and social media, in which they suggested, with no substantiation, that they had seen evidence of fraud in the continuing vote count. The judge said that anyone with proof of any irregularities should report it to local law enforcement, or to get the person who had witnessed irregularities to swear out an affidavit.

“I am urging because of the highly public nature of this case to ramp down the rhetoric,” Judge Tuter said. “Everything the lawyers are saying out in front of the elections office is beamed all over the country. We need to be careful what we say. These words mean things these days, as everybody in the room knows.”

The hearing took place in a courthouse that was otherwise closed in observance of Veterans Day, in response to the eighth lawsuit filed in the close and hotly contested races for Senate, governor and agriculture commissioner in Florida, where machine recounts were begun over the weekend.

Republicans have suggested that their candidates’ slim leads in key races had grown thinner since Election Day because county elections supervisors had counted ballots that arrived late or were cast illegally. Although they have made these allegations publicly, no specific accusation relating to illegal activity in the 2018 race has been lodged in court.

[Why is Florida’s governor claiming fraud in the midterm election? Read it here.]

The judge stressed that he was not “casting aspersions on any elected officials,” and noted that there was too much suspicion in the process.

“We have a trust issue in this county,” said Jason Zimmerman, the lawyer for Governor Scott, who is the Republican candidate for Senate and has a 12,600-vote lead over the Democratic incumbent, Bill Nelson. Mr. Zimmerman was referring to a history of vote-count mishaps in Broward County, which has been cited by Mr. Nelson and others since Election Day.

Broward County has been at the center of many of the protests waged over ballot counts. The county’s elections supervisor, Brenda C. Snipes, defended her office’s actions.

“We’re in an era when people oftentimes speak without vetting their information,” she told reporters on Monday. She said in her 15 years as elections supervisor, she had never before been “attacked” in as personal a manner as she has this year. She referred specifically to President Trump’s comments on Twitter about the conduct of the election.

Lawyers for both parties have filed lawsuits seeking greater access to ballot-counting records that by law are in the public domain. On Monday, the Democratic National Committee asked a federal court to order elections supervisors in the state to count mail-in ballots that were postmarked by Election Day. Florida law says that votes mailed domestically must arrive by Election Day to be counted, regardless of when they were mailed; the Democrats’ lawsuit argues that the rule unfairly subjects the votes to the vagaries of the Postal Service.

The law is different for overseas and military ballots; they only need to be postmarked by Election Day, and can arrive up to 10 days later and still be counted. Ballots mailed from overseas tend to favor Democrats, election experts say.

The Nelson campaign also called on Monday for Mr. Scott to recuse himself from any role in the recount process.

When he rejected the request to impound the machines and ballots, Judge Tuter urged the two sides in the case to work out an agreement on extra security measures over a lunch break in the hearing, which they did. 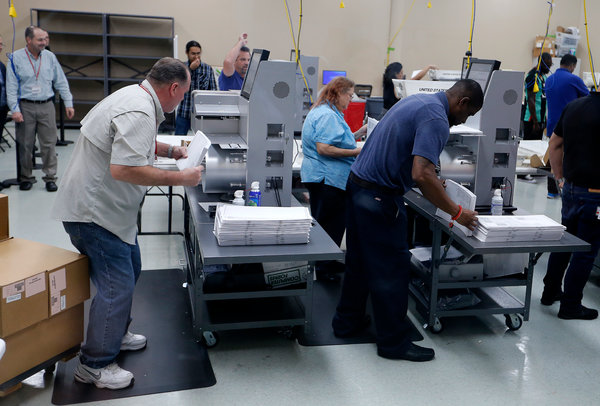 “Because there is so much going on in the public domain, I believe there needs to be some additional way of instilling confidence that votes are being protected,” Judge Tuter said. “Make sure that everybody has a degree of comfort that no ballots are leaving the office.”

Eugene K. Pettis, an attorney for Ms. Snipes, said Republican lawyers were conducting a smear campaign by suggesting in public that new ballots had appeared “in the dark of night.” Ms. Snipes has said any additional mailed ballots that were tabulated after Election Day were counted in compliance with the law. A Broward Sheriff’s deputy already watches the counting room, and access to the tabulation area is tightly controlled, Mr. Pettis said.

He said Republicans were citing errors made in past elections to make their case — including an instance in 2016 when Ms. Snipes had “inadvertently discarded” ballots before a legal dispute was resolved — but that the Republicans had offered no proof of any present irregularities.

The 2016 case “was a mistake, she acknowledged that,” he said of Ms. Snipes. “They continue to bring that up to suggest something nefarious about what’s going on now.”

He said that if the judge had ordered the machines impounded, the step would fuel conspiracy theories about vote-rigging and would still not satisfy the many demonstrators who are protesting the conduct of the vote count.

“I do not think this will quiet those people who are screaming outside,” he said. “You want to want to know what undermines our electoral process? That type of behavior.”

Outside the election supervisor’s headquarters in a shopping mall near Fort Lauderdale, some two dozen protesters milled about on Monday, almost uniformly expressing the view that the election was rigged against Republican candidates.

They held signs in favor of Mr. Trump and the Republican gubernatorial candidate, Representative Ron DeSantis, who has a lead of roughly 33,500 votes over his Democratic opponent, Mayor Andrew Gillum of Tallahassee. Some of the protesters posed next to a life-size cutout of the president standing at a lectern. One sign expressed “no confidence” in Ms. Snipes, with expletives attached.

“I worry about this process as long as someone like Brenda Snipes is in charge of this office,” said David Rosenthal, a 62-year-old retired letter carrier and Navy veteran, jerking a thumb at the building behind him.

Nearby, a plastic skeleton of the kind used in anatomy classes was propped up in a canvas chair, holding a sign that said, “Thank you Brenda for counting my vote.”

Elections officials in Broward County brought in two additional counting machines overnight and set them up alongside the 10 others that are recounting the tally of last week’s balloting. On Monday morning, officials were conducting logic and accuracy tests on the two machines before adding them to the process.

Florida was not the only state with races still undecided six days after the election.

In Arizona, the race for the Senate seat being vacated by Jeff Flake, a Republican, was still up in the air. . Representative Kyrsten Sinema, a centrist Democrat, has a lead of about 32,000 votes, or about 1.5 percentage points, over her Republican opponent, Representative Martha McSally. Some Republican leaders, including Mr. Trump, have made unsubstantiated claims that Ms. McSally is trailing in the race because of electoral fraud.

At the same time, supporters of Ms. Sinema contend that a victory by the Democrat is almost inevitable. Turnout surged in Arizona this year, and electoral officials still have more than 200,000 ballots left to be counted around the state. Authorities say they need to carefully verify signatures on early ballots that were dropped off at voting centers on Election Day.

Georgia’s election for governor tightened on Monday — Brian Kemp, the Republican nominee, now leads the Democratic candidate, Stacey Abrams, by about 58,000 votes — even though many state and local offices were closed for Veterans Day.

Both candidates’ campaigns were closely monitoring vote totals trickling in from counties across Georgia, but they were largely focused on a lawsuit that could lead to the counting of more absentee and provisional ballots, perhaps making it possible for Ms. Abrams to gain enough votes to force a runoff on Dec. 4.

Democrats, using a line of attack they have deployed in Florida, insisted that Georgia officials “count every vote.” But Mr. Kemp’s campaign spent Monday freshly asserting that the race was over, and that there was no plausible path to a runoff.

An earlier version of this article referred incorrectly to a lawsuit requesting that all mail-in ballots postmarked by Election Day but received later be counted. It was filed by the Democratic National Committee, not by Senator Bill Nelson’s campaign.