“It’s impossible to ignore the context and the frequency with which exemptions are being made for religious groups.”

In Her Words is available as a newsletter. Sign up here to get it delivered to your inbox.

The U.S. Senate confirmed Justice Amy Coney Barrett to the Supreme Court on Monday in a 52-48 vote, with all but one Republican, Senator Susan Collins of Maine, voting in her favor — a decision that is likely to reshape the court for years to come.

It was the first time in 151 years that a justice was confirmed without the support of a single member of the minority party, a sign of a bitterly partisan divide over judicial nominations.

“She is one of our nation’s most brilliant legal scholars, and she will make an outstanding justice on the highest court in our land,” President Trump said on Monday at Justice Barrett’s unusual nighttime swearing-in ceremony on the White House lawn.

Senate Democrats and civil rights groups condemned the confirmation, viewing the process that unfolded a week before the presidential election as a hypocritical power grab by the Republican Party, which denied President Barack Obama the opportunity to name a justice to the court nine months before the election in 2016.

And they view Justice Barrett as a grave threat to a wide-ranging set of issues, noting that her track record, including her recent decision to reverse a verdict that awarded damages in a sexual assault case, her dissents to rulings that have invalidated anti-abortion laws and her opposition to contraceptive coverage in the Affordable Care Act, all reveal her conservative leanings.

“A vote for Barrett is a vote to strip health care from millions of people; it’s a vote to turn back the clock on reproductive freedom,” Senator Elizabeth Warren, Democrat of Massachusetts, said over the weekend. “To endanger Dreamers and immigrants. To let climate change rampage unchecked. To imperil efforts to address systemic racism. To place workers’ rights, voting rights, L.G.B.T.Q. rights, and gun violence prevention at risk.”

Justice Barrett’s confirmation also arrives at a time when the judicial system has grown increasingly conservative and pro-religion, potentially cementing the rightward tilt of the entire legal system for years to come.

From 1953 to 2005, the Supreme Court ruled in favor of religion (religious organizations or individuals) about 50 percent of the time, according to an analysis by Lee Epstein, law professor at Washington University in St. Louis, and Eric Posner, law professor at the University of Chicago. From 2005 onward, under Chief Justice John G. Roberts, the Supreme Court sided with religion almost 90 percent of the time. 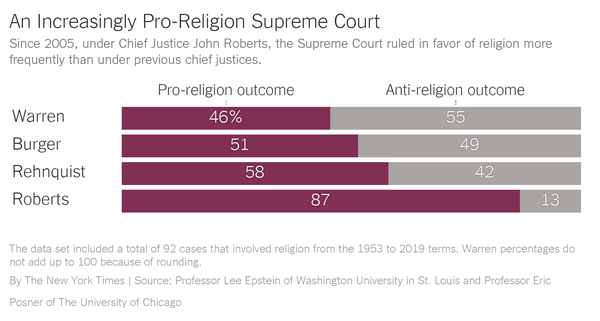 Over time, the two professors found, there was also a shift in the kinds of religious groups appearing before the court. From 1953 to 2005, it was either secular groups arguing against government accommodations for religion, or members of minority religious denominations, like Jehovah’s Witnesses, arguing against policies that clashed with their beliefs, Ms. Epstein explained. Under Chief Justice Roberts, most of the plaintiffs were mainstream Christian groups.

At the same time, Mr. Trump has appointed more judges to the federal appeals courts — the last stop for federal cases before the Supreme Court — than any other president during his first three years in office, all with solid conservative credentials, according to a New York Times analysis. Judges installed by Republicans over the last four years now make up roughly a third of the entire federal appellate bench and Mr. Trump’s appointees have drawn twice as many “no” votes in the Senate as those appointed by President George W. Bush and President Obama, the analysis found, underscoring the increasingly divisive nature of the appointments.

It is this shifting backdrop that makes Justice Barrett a real threat to liberal rulings, legal experts said.

“It’s impossible to ignore the context and the frequency with which exemptions are being made for religious groups,” said Nan Hunter, a law professor at Georgetown University who specializes in constitutional and gender law. “The concern is that another justice who brings a very strong conservative religious judicial philosophy will, at a minimum, encourage that litigation and quite possibly help to change the law.”

“And religion really cuts across everything,” Ms. Hunter added. Much of the erosion of Roe v. Wade, for example, stem from carve-outs made on religious grounds, she said. The same goes for opposition to birth control coverage under the Affordable Care Act.

How Justice Barrett will behave in her new role is unclear. She might, like most new appointees to the court, be “cautious in the first year or two,” noted Ms. Epstein of Washington University, who also studies the behaviors of federal judges.

“Kavanaugh was a very good example: If you look at his voting record in the first year or two, he hews very close to Chief Justice Roberts,” Ms. Epstein said. “There was not a lot of light between those two.”

The dynamics of the new court will become clear soon. Shortly after Election Day, the Supreme Court is scheduled to hear two consequential cases: a challenge to the Affordable Care Act and a gay rights case, Fulton v. City of Philadelphia, which will determine whether the government can exclude a Catholic agency that does not work with same-sex couples from the foster care system. And if the results of the presidential election are disputed and the Supreme Court is called to weigh in, Justice Barrett has said she would not recuse herself from the case.