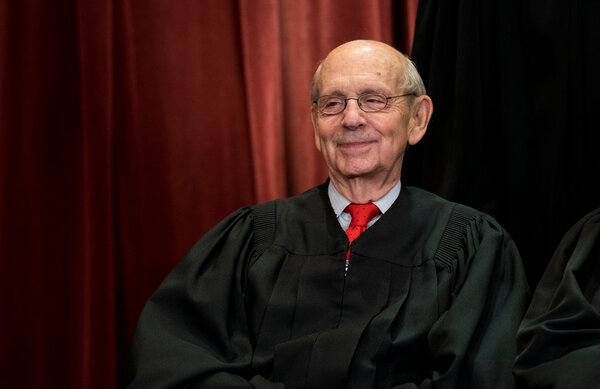 Justice Stephen G. Breyer warned on Tuesday that expanding the size of the Supreme Court could erode public trust in it by sending the message that it is at its core a political institution.

Justice Breyer, 82, is the oldest member of the court and the senior member of its three-member liberal wing. He made his comments in a long speech streamed to members of the Harvard Law School community. He did not address the possibility that he might retire, giving President Biden a chance to name a new justice while the Senate is controlled by Democrats. But his talk had a valedictory quality.

He explored the nature of the court’s authority, saying it was undermined by labeling justices as conservative or liberal. Drawing a distinction between law and politics, he said not all splits on the court are predictable and that those that are can generally be explained by differences in judicial philosophy or interpretive methods.

Progressive groups and many Democrats were furious over Senate Republicans’ failure to give a hearing in 2016 to Judge Merrick B. Garland, President Barack Obama’s third Supreme Court nominee. That anger was compounded by the rushed confirmation last fall of Justice Amy Coney Barrett, President Donald J. Trump’s third nominee.

Liberals have pressed Mr. Biden to respond with what they say is corresponding hardball: expanding the number of seats on the court to overcome what is now a 6-to-3 conservative majority. Mr. Biden has been noncommittal, but has created a commission to study possible changes to the structure of the court, including enlarging it and imposing term limits on the justices.

Justice Breyer said it was a mistake to view the court as a political institution. He noted with seeming satisfaction that “the court did not hear or decide cases that affected the political disagreements arising out of the 2020 election.” And he listed four decisions — on the Affordable Care Act, abortion, the census and young immigrants — in which the court had disappointed conservatives.

Those rulings were all decided by 5-to-4 votes. In all of them, the majority included Chief Justice John G. Roberts Jr. and what was then the court’s four-member liberal wing to form majorities.

“I hope and expect that the court will retain its authority,” Justice Breyer said. “But that authority, like the rule of law, depends on trust, a trust that the court is guided by legal principle, not politics. Structural alteration motivated by the perception of political influence can only feed that perception, further eroding that trust.”