The United States Department of Justice announced on Wednesday that it had asked its internal watchdog to investigate the jail official’s response to heating and electrical failures at a Brooklyn federal jail last month that left inmates confined to cold, dark cells for days.

In a statement, the department said its Office of the Inspector General, which conducts independent, internal investigations, would determine if the Bureau of Prisons correctly handled the crisis at the Metropolitan Detention Center and whether it had adequate contingency plans in place.

The Bureau of Prisons, which oversees federal jails and prisons, is part of the Justice Department. The Office of the Inspector General could not be reached for comment.

The announcement came less than a week after reports of the conditions at the M.D.C. became public, drawing protesters to the waterfront jail. Elected officials who toured the facility expressed surprise at what they described as a lack of urgency by the jail’s management to fix the faltering heat and power amid frigid winter temperatures.

The department also said the bureau would conduct its own review of the infrastructure and emergency plans at the jail.

The Justice Department offered this statement on the federal jail in Brooklyn. 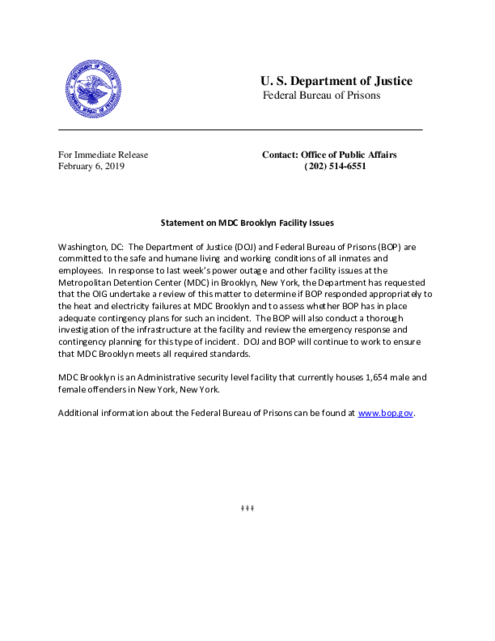 The jail had been experiencing intermittent heating problems since mid-January, employees said during a court hearing this week. But the problems worsened as temperatures plummeted on Martin Luther King’s Birthday and unrelated electrical problems affected the jail’s power. A Jan. 27 electrical fire plunged much of the jail into darkness as the city experienced some of the coldest weather of the winter. Inmates were locked in their cells, many of them without heat, hot water or warm food.

“Given the inhumane conditions I observed at M.D.C., this is a badly needed step to determine what went wrong and to root out the culture that allowed these problems to occur,” said Representative Nydia Velázquez, a Democrat whose district includes the jail.

Ms. Velázquez and Representative Jerrold Nadler, a Democrat and the head of the House Judiciary Committee, have been asking the department to launch such an investigation since they visited the jail over the weekend and heard accounts from inmates.

The M.D.C., New York City’s largest federal detention center, holds more than 1,600 inmates, most of them awaiting trial and not convicted of a crime.

Earlier on Wednesday, lawmakers sent a letter to the Department of Justice stating there was “ample grounds” to review conditions at the jail. “It is still unclear why the facility had prolonged issues with heating and electricity,” said the letter, which was signed by about two dozen lawmakers.

“It is understood that the facility kept detainees on lockdown without appropriate access to medical services. Further, attorneys and paralegal staff reported that detainees lacked access to extra blankets and could not purchase extra sweatshirts at the commissary,” it said.