Kamala Harris has challenged Joe Biden’s record on race during an emotional exchange at the Democratic debate.

The California senator was speaking about the policy of busing children to desegregated public schools.

Although American schools were technically desegregated in 1954 they remained largely segregated due to trends in housing and neighbourhood segregation.

Busing, which disappeared by the early 1990s, was seen as the main remedy for this.

Ms Harris, the daughter of a black father from Jamaica and an Indian mother, spoke about a little girl who was bused in the 1970s before revealing: “That little girl was me”.

She said to Mr Biden: “I do not believe you are a racist.

“And I agree with you when you commit yourself to the importance of finding common ground.

“But I also believe – and it’s personal and it was hurtful to hear you talk about the reputations of two United States senators who built their reputations and career on the segregation of race in this country.” 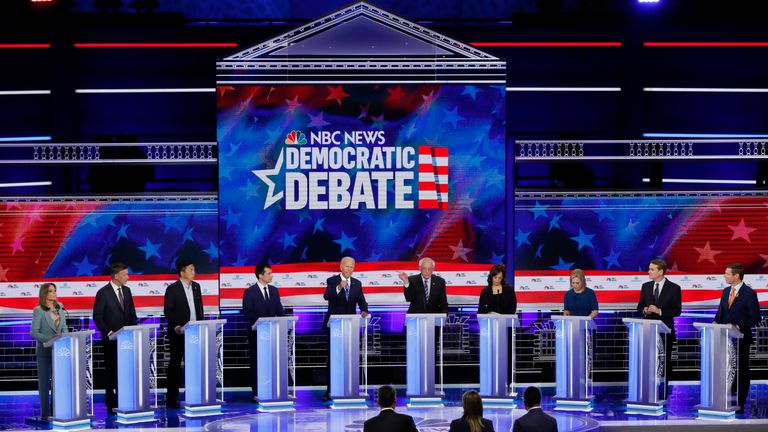 Mr Biden, who is the race’s frontrunner and was vice president under Barack Obama, has already been criticised for saying that he worked with segregationists earlier in his career to achieve things in the Senate.

He replied: “It’s a mischaracterisation of my position across the board: I did not praise racists. That is not true.

“If we want to have this campaign litigated on who supports civil rights and whether I did or not, I’m happy to do that.

“Everything I have done in my career, I ran because of civil rights and continue to think we have to make fundamental changes and those civil rights, by the way, include not just African-Americans, but the LGBT community,” he said.

Illegal immigration was also a major focus of the debate and all but one contender (Colorado senator Michael Bennet) said they would make illegally crossing the border a civil offence, rather than a criminal one.

Also, all 10 candidates said their health insurance plans would cover people who arrived in the US illegally.

But Donald Trump tweeted: “All Democrats just raised their hands for giving away millions of illegal aliens unlimited healthcare. How about taking care of American Citizens first!? That’s the end of that race!”

Mr Biden has a healthy lead in opinion polls, while Mr Sanders had been running second but has seen some of his supporters drift to Elizabeth Warren.

There is a large field of contenders for the Democratic presidential nomination and the debates were spread over two nights.

They are all polling at around 1% or less.