Weather: Dangerously hot again today. Mostly sunny, with a high in the mid-90s and a heat index around 105. Chance of evening storms.

Alternate-side parking: In effect until Sunday (Feast of the Assumption). 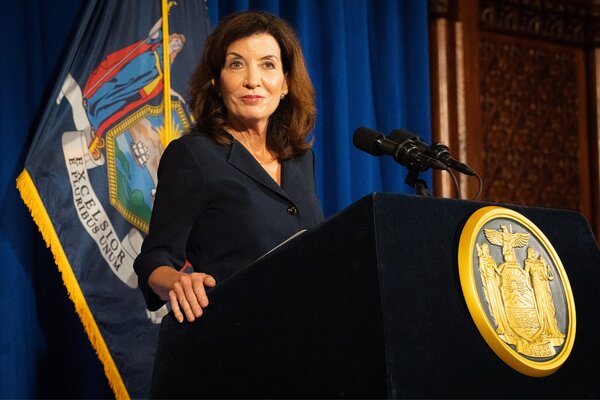 She declared herself equipped to guide New York after the challenges of the past year. She promised she would not foster a “toxic” environment in her administration. And she stood less than two weeks away from being the first woman to lead the state.

On Wednesday, in her first public address since Gov. Andrew M. Cuomo announced his resignation, Lt. Gov. Kathy Hochul projected an image of confidence as she spoke at the State Capitol.

“I want people to know that I’m ready for this,” said Ms. Hochul, a Democrat. “It’s not something that we expected or asked for, but I am fully prepared to assume the responsibility as the 57th governor of the State of New York.”

[Read more about her remarks and her time as a politician.]

Here’s what to know about Ms. Hochul:

Mr. Cuomo has promised a smooth change of leadership to Ms. Hochul, who is set to be sworn in on Aug. 24.

Ms. Hochul, 62, is from western New York, where she worked in local politics after serving as a staffer on Capitol Hill in Washington. She won a special election in 2011 following the resignation of a congressman in one of the state’s most conservative districts, and joined the governor’s team in 2014.

She is being briefed on the state’s overarching coronavirus response, among other issues. And she will need to assemble a team of senior staffers and craft her own policy agenda, after years of largely promoting someone else’s.

Mr. Cuomo had a long reputation for governing with a bellicose style, using tactics that often alienated lawmakers in both parties.

Ms. Hochul, by contrast, has established deep reservoirs of political good will, and her genial demeanor could create a shift in the atmosphere of Albany. She also said that she would oust staffers from Mr. Cuomo’s administration who acted unethically.

Like Mr. Cuomo, Ms. Hochul could end up clashing with the ascendant progressive wing of the Democratic Party. She will inherit high-profile policy issues, such as the implementation of a recently approved $2.1 billion fund to provide cash payments to undocumented immigrants.

And one week after she takes office, New York’s moratorium on evictions will end, meaning that tens of thousands of people who fell behind on their rent during the pandemic may be at risk of losing their homes.

Here are a few other stories on the implications of Mr. Cuomo’s resignation:

Cuomo Advanced a Feminist Agenda. Was That Just Politics?

As Cuomo Departs, Contenders for Power Begin to Emerge

Why Only 27 Percent of Young Black New Yorkers Are Vaccinated

They Came for Covid Vaccines. They Got $100.

What to Know About Breakthrough Infections and the Delta Variant

A 7-Year-Old Dies in the Bronx, and Records Show a History of Abuse

Summer isn’t over yet. Stay up to date on the best things to do, see and eat this season. Take a look at our latest Summer in the City newsletter, and sign up here.

A look at the major gun violence prevention program that is coming to New York, its track record in other cities and possibilities in the five boroughs. [The Trace]

The City University of New York is temporarily suspending its policy of withholding the transcripts of former students with unpaid bills, a practice that came under fire during the pandemic. [Daily News]

And finally: What will we do without Barry the Barred Owl?

From Michiko Kakutani for The Times:

She was a charismatic creature, sassy and confident and constant as Harry Potter’s beloved Hedwig. As wise and playful a teacher as Merlin’s Archimedes. And in real life, an owl unusually accommodating of the many humans who gathered in Central Park every day to watch her snooze in her favorite hemlock tree or fly out through the Ramble on her nightly hunting rounds.

“We used to joke,” David Lei, a photographer, recalled, “that if there were a scientific formula for cuteness, Barry was it: fluffy and round, with those huge, expressive eyes. And I think she was very unusual — especially for a solitary bird — to be so generous with us, to let us observe her so closely every night.”

Barry the Barred Owl alighted in Central Park last October, and startlingly, remained here through the winter and spring and summer. Her arrival during the pandemic brought joy to many New Yorkers who had been hunkered down in their apartments.

She got people away from their Zoom meetings and TV screens, and out into the light. She transformed folks who couldn’t tell a finch from a sparrow into ardent birders. And she turned children and grown-ups alike into students of all things owl, devouring books and videos about owl behavior, owl history and owl legends.

It’s a measure of just how many people Barry touched that her death last week in a collision with a Central Park Conservancy maintenance vehicle resulted in an outpouring of sorrow that was expressed around the world.

Pinned on a fence was a note from a child named Bella: “You were my friend and you made me happy. Because of you, I stopped being scared to go out during the pandemic.”

Jenifer P. Borum, a writer and teacher who had been sick with Covid, said following Barry through Central Park helped her to regain her strength. The next owl, she hopes, will also bring owl watchers together.

“We will look for her in the next owl’s eyes. Though no owl will compare, ever.”

It was another afternoon rush hour on the subway. The train car I was on was packed with a standing-room-only crowd.

Trying to figure out where to plant my gaze while avoiding eye contact, I looked down at the floor. My eyes focused on a pair of ruby red slippers, sparkly, newish-looking and totally out of place so far from Oz.

I couldn’t help it. My eyes drifted up to the face of a young woman who was staring directly at me with an expectant look on her face.

I felt compelled to say something.

“Well,” the young woman said, “when I click my heels together three times, my roommate from Kansas walks in the room.”

We were at my stop.