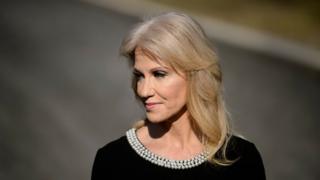 The incident, which she described to US media, is said to have taken place in a restaurant in a Washington DC suburb.

Ms Conway says the woman was “screaming her head off” when she grabbed her from behind and shook her in October.

Mary Elizabeth Inabinett, 63, denies charges of second-degree assault and disorderly conduct. She is due to stand trial in March.

“She was out of control,” Ms Conway told CNN. “I don’t even know how to explain her to you. She was just, her whole face was terror and anger.”

She said she called 911, but by the time the police arrived at the Mexican restaurant in Bethesda, Maryland, the woman had already left.

Her teenage daughter had been able to film part of what happened, Ms Conway added.

Ms Inabinett’s lawyer, William Alden McDaniel Jr, said in a statement that his client “did not assault Ms Conway”, but rather had “exercised her First Amendment right to express her personal opinions”.

He added that she intends to plead not guilty.

On 19 June, Homeland Security Secretary Kirstjen Nielsen was heckled by activists while eating out in Washington DC.

They asked her if she could “hear the babies crying”, referring to a scandal involving children being separated from their parents at the US’s southern border with Mexico.

And just a few days later, White House press secretary Sarah Sanders was asked to leave a Red Hen restaurant in Lexington, Virginia – also in protest over the treatment of migrants at the border.