Kellyanne Conway, the former top White House adviser, said on Twitter Friday night that she had tested positive for the coronavirus, making her the latest person close to President Trump to have gotten sick this week.

“Tonight I tested positive for COVID-19,” Ms. Conway said in a Twitter post late Friday night. “My symptoms are mild (light cough) and I’m feeling fine. I have begun a quarantine process in consultation with physicians. As always, my heart is with everyone affected by this global pandemic.”

Ms. Conway is one of several people — including the president — to have said they tested positive for the coronavirus after attending White House events announcing Mr. Trump’s nominee for the Supreme Court, Judge Amy Coney Barrett, last Saturday.

While a number of people tested positive after the Rose Garden announcement, the ceremony was most likely not a “super-spreader” event because it was outdoors.

However, many top Republicans attended without masks or social distancing, raising concerns that others may have contracted the virus but had not yet been diagnosed. And someone who was infected and did not have symptoms could still have transmitted the virus to others during indoor discussions inside the White House.

In addition to Ms. Conway, others who tested positive after the event include Melania Trump, the first lady, and John I. Jenkins, the president of the University of Notre Dame.

Top Senate Democrats demanded on Friday that Republicans slow their speedy timetable for confirming Judge Barrett, saying that if Republicans marched ahead with hearings without an understanding of the full extent of the virus’s spread from the event, an “already illegitimate process will become a dangerous one.”

Leading Republicans said they planned to continue “full steam ahead” to confirm Judge Barrett before Election Day. But Mr. Trump’s illness, and the fact that two senators on the pivotal Judiciary Committee — Senator Thom Tillis, Republican of North Carolina, and Senator Mike Lee, Republican of Utah — have also tested positive after attending the event, raise questions about whether their extraordinarily ambitious timetable could hold.

Mr. Tillis’s diagnosis also dealt a blow to Republicans’ hopes of retaining control of the Senate, given that he is already facing a difficult re-election battle.

The confirmation of a sixth conservative-leaning justice to the court would be the culmination of a decades-long conservative project, an effort spearheaded by the majority leader, Senator Mitch McConnell of Kentucky. 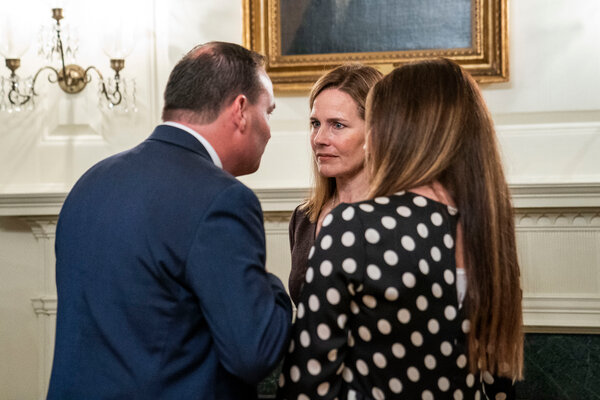 Judge Barrett, 48, tested negative on Friday, a White House official said. Two officials with knowledge of her medical history said that she had already had the coronavirus and recovered this year.

Judge Barrett was in close contact with Mr. Trump at the White House last weekend around the unveiling of her nomination. She also worked closely with several White House officials and met with dozens of Republican senators on Capitol Hill, including the majority leader, Senator Mitch McConnell of Kentucky, and Mr. Lee.

A video posted on Twitter showed Mr. Lee hugging people at the event. He said he had tested negative at the White House on Saturday.

It can take several days for someone who has been exposed to the virus to develop symptoms or to test positive for the virus. Anyone tested within just a day or two after exposure is likely to receive a negative result even if they are infected.

Senator Lindsey Graham of South Carolina, the Judiciary Committee chairman, said on Friday that his panel would begin four days of public hearings on Judge Barrett’s nomination on Oct. 12, as scheduled. Mr. Tillis and Mr. Lee said they would isolate for 10 days, which would enable them to emerge in time for the hearings.

In an interview on Friday, Mr. McConnell suggested that the virus spreading through Republican circles could mean more lawmakers would participate in the hearings virtually. “This sort of underscores the need to do that,” he said.

But the Democrats said virtual hearings on such a consequential matter would be unacceptable.