The effect of bystanders and the Minneapolis Police Department’s use-of-force protocols have been key topics in recent testimony. 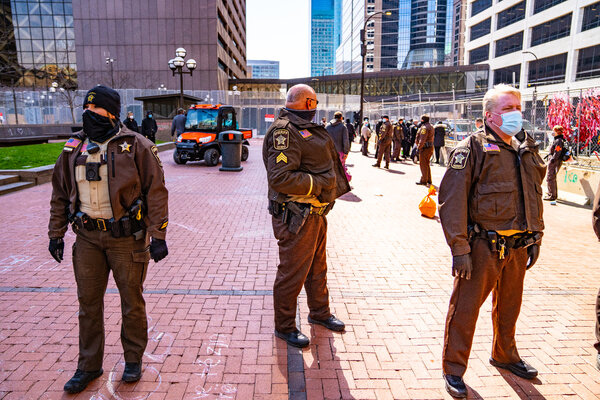 By Will Wright, Shaila Dewan, Nicholas Bogel-Burroughs and John Eligon

Several members of the Minneapolis Police Department testified in the trial of former officer Derek Chauvin on Tuesday, providing key support for prosecutors’ arguments that his actions last May killed George Floyd.

Here are some key takeaways from that testimony as the trial heads into its eighth day on Wednesday.

Police officers testify that bystanders could pose a distraction.

Officer Nicole Mackenzie, the medical support coordinator for the Minneapolis Police Department, agreed with an assertion by Mr. Chauvin’s lawyer, Eric J. Nelson, that a crowd of vocal bystanders could make it difficult for an officer to render medical aid during an arrest. Lt. Johnny Mercil, a veteran of the Minneapolis Police Department and use-of-force instructor, also said that hostile bystanders could raise alarm with officers.

Sgt. Ker Yang, a crisis intervention coordinator with the Minneapolis Police Department, was asked whether an officer can “look bad” even when applying force that is lawful, and asked whether officers are tasked with weighing possible threats, such as a crowd of bystanders, when applying force. “You’re taking in a lot of information and processing it all kind of simultaneously through this critical decision-making model,” Mr. Nelson said. Sergeant Yang agreed.

Mr. Nelson has suggested throughout the trial that the crowd outside Cup Foods, which yelled at Mr. Chauvin as he knelt on Mr. Floyd for nine and a half minutes, might have made it more difficult for the former officer to help Mr. Floyd.

A use-of-force expert evaluated the video of Mr. Floyd’s arrest.

Sgt. Jody Stiger of the Los Angeles Police Department, who said he has trained close to 3,000 police officers in use-of-force tactics., told prosecutors that Mr. Floyd kicked at officers as a possible attempt to break free from their grasp. He added that, based on his review of body camera footage, Mr. Floyd seemed to comply with officers shortly after they placed him facedown on the pavement, with his hands cuffed behind his back.

Asked directly about Mr. Chauvin’s actions, Sergeant Stiger was blunt: “My opinion was that the force was excessive.”

Discussion of neck restraints may help the defense’s arguments.

When reviewing a picture of Mr. Chauvin pinning George Floyd to the ground, Lieutenant Mercil told prosecutors that Mr. Chauvin’s position was not consistent with the Minneapolis Police Department’s training on use of force. In addition, Lieutenant Mercil said that officers are trained to “use the lowest level of force possible” when controlling a subject.