Last spring Annie Chen, who works in human resources, read about an Asian woman who had been punched in the face and yelled at by a stranger just a few blocks from where she lived in Midtown Manhattan.

She had been struck by the way the public perception of Asian-Americans had suddenly changed, she said, and simply wanted to protect herself. “I felt like if people had any anger or frustration — and if you were just walking around being a person who looks Asian — they might take it out on you.”

In response, organizers have formed watch groups, volunteer buddy systems and other initiatives. Many Asian-Americans have also changed the way they go about their daily lives, avoiding the subway, staying hyper-alert in public and remaining at home as much as possible.

But as more New Yorkers get vaccinated, the city is unquestioningly opening up. Many Asian-Americans, responding to the continuing spate of attacks, are now increasingly arming themselves with items for personal defense.

“I think it just speaks to the urgency that people are feeling,” said Kenji Jones, one of several New Yorkers raising money to give away personal-defense devices in Chinatown and Flushing, Queens.

On March 31, Mr. Jones, 23, posted a call for donations on Instagram. He ended up raising more than $18,000 in three days, he said. In April, he distributed nearly 3,000 canisters of pepper spray and more than 1,000 personal alarms. During another giveaway, he was met with throngs of people and ran out of supplies within 20 minutes. And last weekend, at a Chinatown event, thousands more devices — including kubotans (keychain weapons), whistles and more pepper spray — were distributed. 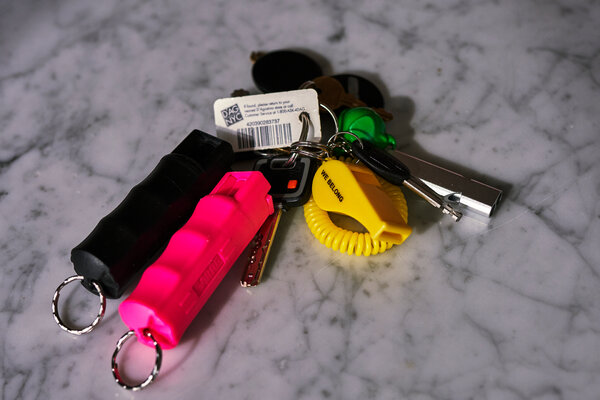 It’s legal for adults who have not been convicted of a felony or assault to carry pocket-size pepper spray in New York, as long as it complies with regulations set by the State Department of Health. Sales are restricted to authorized dealers and customers can buy only two canisters at a time (Mr. Jones amassed the pepper spray for his giveaways through a friend in New Jersey, which has more relaxed rules).

At Esco, a pharmacy in Hell’s Kitchen, pepper spray sales increased eightfold in the month after the Atlanta spa shootings, in which a gunman killed eight people, six of whom were Asian or Asian-American women. Danny Dang, the owner of Esco, said that 90 percent of the customers buying the spray were Asian-American.

Both Mr. Bramhandtam and Ms. Chen called the pepper spray a last resort, sharing concerns about using it effectively and escalating an already dangerous situation. To this end, they have adopted other precautions to minimize the possibility of having to use it.

A Rise in Anti-Asian Attacks

A torrent of hate and violence against people of Asian descent around the United States began last spring, in the early days of the coronavirus pandemic.