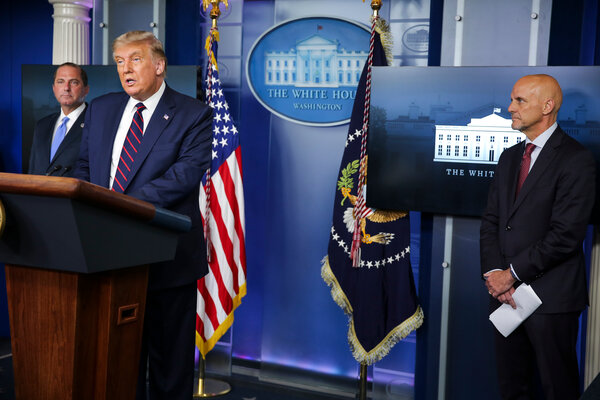 WASHINGTON — Top government scientists at the Food and Drug Administration and the Centers for Disease Control and Prevention could face reassignment every five years under a new regulation the Trump administration issued Friday evening, a move that surprised health officials across the government.

The rule, which the Department of Health and Human Services described in a news release as an effort to “increase professional development opportunities” and “harmonize H.R. practices,” was summarized in more blunt terms in the document’s file name: “term limits.”

Under the rule, more than a dozen senior officials could lose their positions as soon as this year — including a key regulator at the F.D.A. responsible for evaluating Covid-19 drugs. Altogether, around 60 top government health officials would be subject to new employment reviews under the policy.

Although the regulation may well be reversed by the Biden administration, it is a parting shot in the Trump administration’s consistent efforts to give political appointees more sway over policy.

Because the rule, which was first reported to be under consideration by Politico, concerns the agency’s practice and procedure, it is not subject to normal rules of notice and comment, making it easier to change than other regulations. It is expected to be published in the Federal Register on Tuesday, the day before the Trump administration ends. It would not take effect for another 30 days, providing a window for pre-emptive reversal.

Top officials at the F.D.A., the C.D.C. and the Centers for Medicare and Medicaid Services were caught off guard by the last-minute move. Agency heads at the National Institutes of Health are already subject to such five-year reviews, under legislation passed by Congress in 2016, a policy that was broadly criticized.

Dr. Stephen M. Hahn, the F.D.A. commissioner, said in an interview on Friday that the new rule could be perceived as threatening. He said recently that he was open to the agency being moved out of H.H.S. and becoming independent.

“The implications of term limits could have a serious and far-reaching public health impact, affecting industry, patient groups, stakeholders,” he said on Friday. “It needs a very vigorous discussion informed by all points of view. That didn’t happen here.”

Dr. Hahn said the rule meant that a career official “might be willing to do the bidding of an administration knowing his job is on the line in five years.”

“It’s fundamentally different than academia because of the political overtones,” he said.

Seema Verma, the administrator of the Centers for Medicare and Medicaid Services, said her agency had been unaware of the new policy.

“We were completely blindsided by this when agencies were focused on the pandemic response, and the staff has worked tirelessly,” she said. “I think our career staff deserve better than an unvetted policy.”

Brian Harrison, the H.H.S. chief of staff, oversaw the rule himself, in place of the department’s secretary, Alex M. Azar II. The move was the product of a small “deregulatory group” at H.H.S. that Mr. Harrison led this year, he said in an interview. Top health officials have grumbled about what they view as Mr. Harrison’s efforts to draw attention to his role in pursuing new rules, including using the department’s public affairs Twitter account to regularly feature graphics with his name on them commenting on new policies.

No one will lose employment as a result of the rule, he said in a conference call with reporters on Friday. Employees who might lose their roles at the top of centers, bureaus and divisions would be appointed somewhere else within their agency. Others could be renewed for additional five-year terms.

Many top health officials are hired as political appointees, meaning they frequently exit the agencies when there is a change in presidential leadership. But the new rule would affect the professional career staff, who often work in the government for decades.

Mr. Harrison said the change would help diversify the leadership ranks by making way for new employees to ascend to leadership roles. But critics of the policy say it could instead be a convenient way for political leaders to sideline senior career staff members with opposing views and could repel talented scientists considering entering government service.

The new rule is part of a broader pattern of Trump administration moves that weaken career protections for career civil servants. It’s a group that Mr. Trump and other officials have frequently derided as a “deep state” eager to undermine his agenda — a charge the president has made about F.D.A. regulators.

Another recent executive order would strip tens of thousands of government workers of Civil Service protections, making them easier to fire.

Richard C. Loeb, a senior policy counsel at the American Federation of Government Employees, the largest union representing federal workers, said the rule was a “temper tantrum on the way out of office.”

“If there’s a way they can make government employment less attractive to people, this is how to do it,” he said. “These jobs would likely go to academics who would have tenure. It will signal to them there’s no reason to take this job.”

Mr. Loeb said the employees subject to the new reviews were already subject to performance appraisals, which can be used to fire them for poor performance.

“The problem they face is that they have to document why you’re performing poorly,” he said.

Nicholas Bagley, a law professor at the University of Michigan who studies administrative law, said the policy was unlikely to survive the change in leadership.

“If the Biden administration dislikes this, they can get rid of it, and probably will,” he said. “It’s not going to last.”