LIMA, Peru — On paper, the candidates on the presidential ballot in Peru on Sunday are a leftist former schoolteacher with no governing experience and the right-wing daughter of a jailed ex-president who ran the country with an iron fist.

Yet voters in Peru face an even more elemental choice: whether to stick with the neoliberal economic model that has dominated the country for the past three decades, delivering some earlier successes but ultimately failing, critics say, to provide meaningful support to millions of Peruvians during the pandemic.

“The model has failed a lot of people,” said Cesia Caballero, 24, a video producer. The virus, she said, “has been the last drop that tipped the glass.”

Peru has endured the worst economic contraction in the region during the pandemic, pushing nearly 10 percent of its population back into poverty. On Monday, the country announced that its virus death toll was nearly triple what had been previously reported, suddenly raising its per capita mortality rate to the highest in the world. Millions have been left jobless, and many others evicted.

The leftist candidate, Pedro Castillo, 51, a union activist, has promised to overhaul the political and economic system to address poverty and inequality, replacing the current constitution with one that will grant the state a larger role in the economy.

His opponent, Keiko Fujimori, 46, has vowed to uphold the free-market model built by her father, Alberto Fujimori, who was initially credited with beating back violent leftist insurgencies in the 1990s, but who is now scorned by many as a corrupt autocrat. 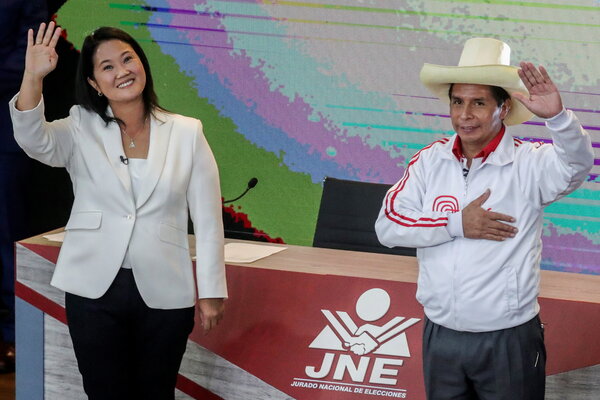 Polls show the candidates in a near tie. But many voters are frustrated by their options.

Mr. Castillo, who has never held office before, partnered with a radical former governor convicted of corruption to launch his bid. Ms. Fujimori has been jailed three times in a money laundering investigation and faces 30 years in prison, accused of running a criminal organization that trafficked in illegal campaign donations during a previous presidential bid. She denies the charges.

“We’re between a precipice and the abyss,” said Augusto Chávez, 60, an artisanal jeweler in Lima who said he might cast a defaced ballot as a form of protest. Voting is mandatory in Peru. “I think extremes are bad for a country. And they represent two extremes.”

Mr. Castillo and Ms. Fujimori each won less than 20 percent of votes in a crowded first-round race in April that forced Sunday’s runoff election.

The election follows a rocky five-year period in which the country cycled through four presidents and two Congresses. And it comes as the pandemic has pushed voter discontent to new levels, fueling anger over unequal access to public services and growing frustration with politicians ensnared in seemingly endless corruption scandals and political score settling.

The hospital system has been so strained by the pandemic that many have died from lack of oxygen, while others have paid off doctors for spots in intensive care units — only to be turned away in agony.

Whoever wins on Sunday, said Peruvian sociologist Lucía Dammert, “the future of Peru is a very turbulent future.”

“The deep inequities and profound frustrations of the people have stirred, and there’s no organization or actor, whether private companies, the state, unions, to give voice to that.”

When Ms. Fujimori’s father swept to power in 1990 as a populist outsider, he quickly reneged on a campaign promise not to impose free-market “shock” policies pushed by his rival and Western economists.

The measures he used — deregulation, government spending cuts, privatization of industry — helped end years of hyperinflation and recession. The constitution he ushered through in 1993 limited the state’s ability to take part in business activities and break up monopolies, strengthened the autonomy of the central bank and protected foreign investments.

Subsequent centrist and right-wing governments signed more than a dozen free trade agreements, and Peru’s pro-business policies were declared a success, credited with Peru’s record poverty reduction during the commodities boom of this century.

But little was done to address Peru’s reliance on commodity exports and longstanding social inequalities, or to ensure health care, education and public services for its people.

The pandemic exposed the weakness of Peru’s bureaucracy and the underfunding of its public health system. The country had just a small fraction of the intensive care unit beds its peers had, and the government was slow and inconsistent in providing even small cash assistance to the needy. Informal workers were left with no safety net, leading many to turn to high-interest loans from private banks.

“The pandemic showed that the underlying problem was the order of priorities,” said David Rivera, a Peruvian economist and political scientist. “Supposedly we’d been saving money for so long to use in a crisis, and what we saw during the pandemic was that the priority continued to be macroeconomic stability, and not keeping people from dying and going hungry.”

Ms. Fujimori has blamed the country’s problems not on its economic model, but on the way past presidents and other leaders have used it. Even so, she says, some adjustments are needed, like raising the minimum wage and pension payments for the poor.

She framed her campaign against Mr. Castillo as a battle between democracy and communism, sometimes using Venezuela’s socialist-inspired government, now mired in crisis, as a foil. Mr. Castillo, who is from Peru’s northern highlands, gained national recognition by leading a teachers union strike in 2017. He campaigns wearing the wide-brimmed hat of Andean farmers, and has appeared on horseback and dancing with supporters.

“For us in the countryside, we want someone who knows what it’s like to work the fields,” said Demóstenes Reátegui.

When the pandemic began, Mr. Reátegui, 29, was one of thousands of Peruvians who trekked and hitchhiked his way from Lima to his rural family home after a government lockdown pushed migrant workers like him out of their jobs.

Mr. Castillo has revealed little about how to make good on vague promises to ensure the country’s copper, gold and natural gas resources benefit Peruvians more broadly. He has promised not to seize companies’ assets, but to renegotiate contracts instead.

He has said he wants to restrict imports of agricultural products to support local farmers, a policy that economists have warned would lead to higher food prices.

If he wins, it will be the clearest repudiation of the country’s political elite since Mr. Fujimori took office in 1990.

“Why do we have so much inequality? Does it not outrage them?” Mr. Castillo said at a rally in southern Peru recently, referring to the country’s elites.

“They can’t lie to us anymore. The people have woken up,” he said. “We can take this country back!”