On Tuesday, amid the heat wave scorching the Bay Area, my colleague, Thomas Fuller, visited the man who’s believed to have caused the biggest fire in the state’s modern history. How? He spotted an underground wasp nest and tried to plug it with a metal stake, which sparked.

Almost a year after the Ranch Fire burned 410,203 acres of wildland, his dispatch from the rural lands where the blaze started serves as a reminder of just how close many Californians live to the edge. Here’s more about the story from Thomas:

The intense dry heat in many parts of California this week is bringing fire anxiety, especially for those who live near open spaces.

John Syfert Jr., an electrician who lives along Route 20 in Mendocino County, might have reason to be nervous. Last July, his wife called him at work to say the other side of the highway was engulfed in flames.

“It’s scary when the whole world is on fire,” Mr. Syfert told me Tuesday on the edge of his driveway.

The Mendocino Complex fire consisted of two major blazes — the River and the Ranch fires. Mr. Syfert and his neighbors found themselves sandwiched between them. He rallied neighbors, slashed back vegetation, watered down roofs and set up generators when the power was off for days at a time. Their row of houses made it through without a scratch.

Mr. Syfert lives a 10-minute walk from the spot where the Ranch Fire is believed to have ignited.

[Read more about how Mr. Syfert’s neighbor is believed to have caused the biggest fire in California’s modern history.]

Mr. Syfert struck me as California resilient. With PG&E threatening to cut power to some neighborhoods for days at a time during periods of high fire danger, he is planning on going off the grid — solar power during the day and a turbine in the creek behind his house at night. Gasoline generators are backups.

Ms. Parker shrugged as she described how Caltrans allows vegetation to proliferate along the side of the highway in front of her house.

“We are in a rural area,” she said. “Cities are always going to come first.”

(We often link to sites that limit access for nonsubscribers. We appreciate your reading Times coverage, but we also encourage you to support local news if you can.) 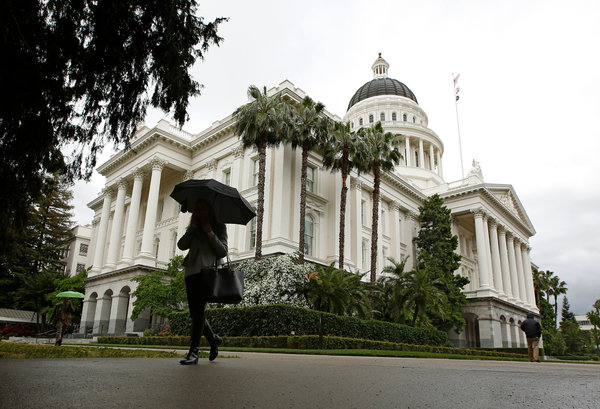 • Minnesota is the only state left with a divided legislature. The rest are either under Democratic control — like California — or under the rule of Republicans. The result is more polarization, experts say. [The New York Times]

• Though some Pacific Gas & Electric employees lost their homes in the deadly Camp Fire, they’ve still been the targets of vitriol as they race the advent of another potentially catastrophic dry season. [The San Francisco Chronicle]

• “Enough is enough.” Gov. Gavin Newsom weighed in on the now 29 horse deaths at Santa Anita Park, calling for a moratorium on racing there until horses are evaluated by independent veterinarians. [The New York Times]

• San Diego State University failed to give out $20 million in available scholarships over the last 10 years. Officials said they were dealing with a variety of issues, including an outdated scholarship management system. [The San Diego Union-Tribune]

• Tesla Model 3 owners started to complain that their cars had arrived with defects like cracked windows and leaks. The company has been struggling to get back on course. [The New York Times]

• A Monterey County man who wanted to raise awareness about the perils of voter fraud has been accused of committing voter fraud himself by registering his dead father and his underage golden retrievers to vote. He registered them as Democrats. [The Salinas Californian]

• The United States shattered records when it beat Thailand 13-0 in the Women’s World Cup on Tuesday. Members of the team seemed to grasp the emotional weight of the victory on their opponents. Alex Morgan, who scored five goals, hugged a teary-eyed Miranda Nild, the California-born Thai striker and fellow U.C. Berkeley alum. [The New York Times]

• Also, the American squad, which is one of the world’s most dominant sports teams, is still fighting to be paid equally. [New York Times Magazine]

Connect with The Times in person

The Times will be screening five short documentaries about immigration and belonging at The Theatre at Ace Hotel in Los Angeles on June 19. Miriam Jordan, who covers immigration for The Times, will moderate a discussion with Laura Nix, the director of “Walk Run Cha-Cha,” along with the film’s two stars, Paul and Millie Cao. The evening will close with a performance by the dancers Maksym Kapitanchuk and Elena Krifuks. [Get tickets here]

The Albany Bulb is, in a certain way, exactly the kind of place you’d expect to exist only in the Bay Area: A tough-to-categorize haven for artists and the homeless, where brightly-colored graffiti covers almost every man-made surface and giant sculptures made of refuse rise from unruly vegetation.

It is, at the same time, hard to believe that a place so wild still exists in the Bay Area — that it’s not covered with glittering condo towers or multimillion-dollar homes, given its stunning waterfront views of both the San Francisco and Oakland skylines.

“This is a museum of environmental destruction, but also a place where nature pushed back,” Susan Moffat, founder of Love the Bulb, told Curbed San Francisco.

Now, the Albany Bulb’s future is uncertain. Read more about its 50-year history and what could be ahead.

Robert Buckland has urged the wider community to ‘call out’ modern day slavery so authorities can act, claiming it is ‘all around us’. The Justice…