Across the country, colleges and universities have been wrestling with allegations of sexual misconduct, racial discrimination and anti-Semitism. But rarely have the three collided at the highest levels of leadership, as they have at Linfield University, a small, historically Baptist college in Oregon’s wine country, which celebrated the appointment of its first Black president in 2018.

The university faces growing calls for the resignation of that president, Miles K. Davis, and the chairman of its board of trustees amid accusations that they made offensive comments about Jews and that Mr. Davis and three other board members had engaged in various forms of misconduct with female professors and students.

One of those trustees resigned in 2019 and has been charged with sexual abuse. The controversies have played out for months in a federal lawsuit filed by a student, through public statements from faculty members and leaders, student protests, and votes of no confidence. It has even pitted the N.A.A.C.P., which has cited racial bias in the accusations against Dr. Davis, against the Anti-Defamation League, which has joined in calls for Dr. Davis’s resignation.

Tensions reached a high on Tuesday when the university fired Daniel Pollack-Pelzner, a Shakespeare scholar and tenured professor of English who had served on the board of trustees and had spoken out about the accusations of anti-Semitism and sexual misconduct.

Students and alumni have condemned the firing, and more than 1,000 professors from the United States, Canada and other countries have signed a letter saying the university’s action could “eviscerate the foundational principles of both free speech and of faculty governance on university campuses.”

“They have fired the whistle-blower,” said Jamie Friedman, an associate professor of English, who had accused Dr. Davis and another trustee of touching her inappropriately at university events. “It’s retaliatory in the extreme.”

In interviews this week, Dr. Davis and the board chairman, David Baca, denied any wrongdoing. 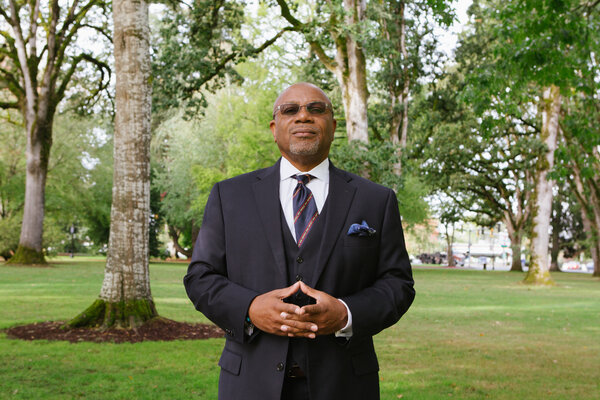 In a statement, the university said Dr. Pollack-Pelzner had been fired “for cause.”

“He has engaged in conduct that is harmful to the university; deliberately violated instructions to preserve the attorney-client privilege,” and “deliberately circulated false statements about the university, its employees and its board” and “refused to comply with university policies,” the statement said. In doing so, it said, he was “insubordinate and interfered with the university’s administration of its responsibilities.”

Dr. Pollack-Pelzner, who was hired by the university in 2010 and has written about theater and the arts as a contributor for The New York Times, said he had been fired without a hearing or any of the other due process protections normally granted to tenured faculty members.

“It’s just devastating,” Dr. Pollack-Pelzner said, adding that he had spoken publicly in his capacity as a faculty trustee who had received complaints from students and colleagues.

“I promised my students and colleagues that I would heed their concerns and make sure that people in positions of power would not violate their power,” he said. He said that his firing sent the message “that if you use your voice to speak up against sexual misconduct, then you will lose your voice.”

The firing, previously reported by The Oregonian, has added to the extraordinary turmoil at Linfield, which was founded in 1858 as a Baptist college and offers liberal arts, business and nursing programs. The university, which has about 1,900 students and 139 faculty members, maintains an affiliation with the American Baptist Churches U.S.A.

Dr. Pollack-Pelzner lost his post a month after he had outlined multiple accusations of anti-Semitism and sexual misconduct by university leaders in a statement on Twitter. He said that he had reported that four trustees had been accused of sexual misconduct by students and faculty over the past year and suggested that there be sexual harassment training and guidelines.

In response, he said, Mr. Baca, the board chairman, “accused me — a Jewish trustee — of harboring a secret agenda to grab power.”

In an interview on Friday, Mr. Baca acknowledged mentioning a power grab in a long and contentious discussion but said he had not known that Dr. Pollack-Pelzner was Jewish or that the comment could be construed as anti-Semitic.

Dr. Pollack-Pelzner also said that Dr. Davis had made a comment in 2018 about “measuring the size of Jewish noses” when the professor had mentioned that he was teaching “The Merchant of Venice,” which features Shylock, a character often criticized as an anti-Semitic stereotype.

Recently, two psychology professors, Tanya Tompkins and Jennifer Linder, said that Dr. Davis had made a comment about the Holocaust during a department meeting in 2018. Promising to be open about budget cuts, he quoted a former professor of his who used to make the analogy, “You don’t send the Jews to the shower with soap,” Dr. Linder said. Dr. Tompkins remembered slightly different wording.

In an interview on Thursday, Dr. Davis said that while he doesn’t recall the comments he made that day, he doesn’t use the phrase anymore and added, “I’m sorry if I said something that offended them at that time.”

Last month, the faculty of arts and sciences took a vote of no confidence in Dr. Davis and Mr. Baca and urged them to resign in a resolution that condemned intolerance, discrimination and retaliation. The Oregon Board of Rabbis called on Dr. Davis and Mr. Baca to resign. And the Anti-Defamation League’s Pacific Northwest office urged Dr. Davis to consider stepping down.

Miri Cypers, the group’s regional director, said that while the A.D.L. frequently responds to hate and anti-Semitism on college campuses, “rarely is that anti-Semitism or hatred perpetrated by a president of a university or other leadership.”

The most serious of the sexual misconduct allegations involved a trustee, David Jubb, who resigned in June 2019 and was charged in an indictment last May with one count of felony sexual abuse and seven counts of misdemeanor sexual abuse. The indictment came after a student trustee filed a federal lawsuit in which she accused Mr. Jubb, 72, of assaulting her after a faculty-trustee dinner. Mr. Jubb has pleaded not guilty and his case is scheduled for trial in November, his lawyer said.

In another incident, Dr. Friedman reported that Dr. Davis had come up from behind her after a panel discussion in 2018 and had rubbed his hands up and down her arms while whispering that he was looking forward to meeting her later, she said.

Dr. Friedman said she had also reported that another trustee, Norman Nixon, a former member of the Los Angeles Lakers, touched her thigh during a university dinner and asked if there was a “Mr. Friedman.”

A lawyer hired by the university substantiated Dr. Friedman’s claim that Dr. Davis had put his hands on her arms but found that the conduct had not violated Linfield’s anti-harassment and sexual harassment policy. Dr. Davis said that an investigation had reached the same conclusion about the accusations against Mr. Nixon, who could not be reached. The university said he had “vigorously denied” the allegations.

Dr. Davis said those accusations and others were being rehashed by professors unhappy with his restructuring of the university after years of declining enrollment. He said racial bias might be a factor in the accusations. Some professors may be uncomfortable with the changes he has made as the university’s first Black president, he said.

Dr. Davis said he was particularly stung by the claims of anti-Semitism, calling it “the thing that bothers me the most.” Last year, he denied making the remark about “Jewish noses,” and an investigator hired by the university called it a “he said, he said” situation that could not be substantiated. On Thursday, he recalled discussing the physical characteristics of Jews and Arabs and making the point that “this portrayal of Shylock with the hook nose is just ludicrous.”

“It becomes an echo chamber that I have to spend my time defending, as opposed to looking at the scope of my life’s work,” he said.

On Friday, the local branch of the N.A.A.C.P. gave support to his account of racial bias, releasing a report that praised Dr. Davis’s leadership and said he had been subjected to unfair personal attacks because of his race.

It said that he had been called “divisive, intimidating, combative, aggressive, disrespectful and abusive,” which the report called coded racist language. Linfield’s trustees “failed see that deeply held resistance to Black leadership and culture fueled the ferocity of resistance to organization change,” the report said. “This is what systemic and institutionalized racism look likes in Oregon.”

The N.A.A.C.P. said Dr. Davis had contacted it last month with concerns about racial bias. Dr. Pollack-Pelzner, Dr. Linder, Dr. Tompkins, Dr. Friedman and two other professors who had received requests to speak to the group responded in an email that investigating employees who have reported harassment and retaliation, “no matter how well-intentioned the investigation — is itself an act of retaliation.”

As the controversy has dragged on, Mr. Baca, the board chairman, has tried to reassure students and others on campus who have protested the handling of the sexual misconduct accusations, writing in a letter to the Linfield community last July, “I believe that you are safe, that there is justice and that the trustees are protecting you.”

He also expressed some regret about his handling of the accusations against Mr. Jubb. He said the university had ordered Mr. Jubb to stop “fraternizing” with students after he was first accused of misconduct in 2018. But that order was not strictly enforced, and Mr. Jubb was accused of sexual misconduct again in 2019, at an event Mr. Baca attended, he said.

“While I did not witness any untoward behavior as alleged, I regret that Mr. Jubb was allowed to be in the same setting with a student,” Mr. Baca wrote.

Mr. Baca’s open letter also took aim at Dr. Pollack-Pelzner, saying “it is shameful that a faculty trustee has spread misinformation” about the sexual misconduct cases.

Dr. Pollack-Pelzner said he had taken the letter as a personal attack, adding that he had been ordered not to talk about sexual misconduct outside of executive session and had then been banned from attending the sessions and finally fired after speaking out on Twitter.

“It’s overwhelming, it’s destabilizing — it’s an attack on the values of higher education that I have worked so hard with colleagues to uphold,” he said. “I don’t know how anybody could feel safe in this environment.”