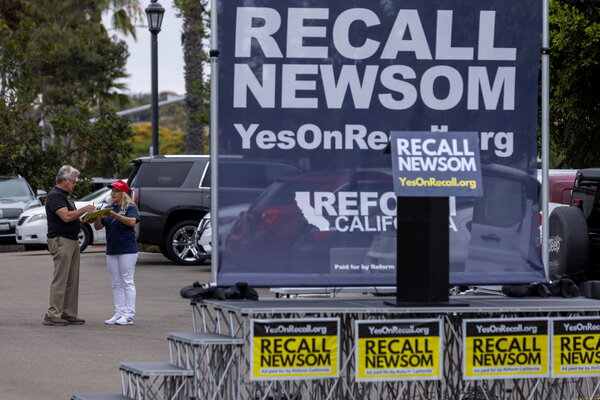 Most Californians know about the recall. You know which one. The one where we will be asked, on Sept. 14, whether we think Gov. Gavin Newsom should be removed from office.

But you may not know about all the others.

The recall effort against Newsom is merely the highest profile of dozens of efforts underway to boot elected officials across the state from their jobs.

There are petitioners seeking support for kicking out three San Francisco school board members, after the panel spent time fighting over a plan to rename schools rather than figuring out how to get students back into classrooms. Community members are trying to oust three of five members of the Shasta County board of supervisors, who they said bowed to “Pharoah Newsom” by enacting pandemic restrictions.

Various Angelenos have said they want to remove at least two City Council members (Mike Bonin and Nithya Raman, who has served just six months) and their newly elected district attorney, George Gascón, known as a progressive reformer. His successor as San Francisco’s district attorney, Chesa Boudin, known as an even more progressive prosecutor, is also facing a recall attempt for enacting policies that got him elected.

While all these might lead you to believe that the state is in the midst of a kind of recall mania — perhaps inspired by the Newsom recall — Joshua Spivak, a senior fellow at Wagner College’s Hugh L. Carey Institute for Government Reform, said that this was actually par for the course.

“I think a lot of these efforts would have happened anyway,” Spivak, who runs a blog tracking and analyzing recall elections across the country, told me.

Last year, Spivak said, he counted 61 recall attempts in California, including one that ended when its target, the widely respected mayor of Auburn, died in a plane crash. Of those 61, just 11 made it onto a ballot and eight of those votes ended with the target being recalled.