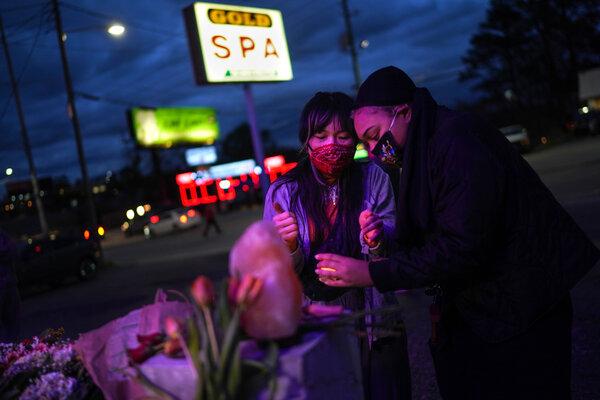 As my colleagues and I reported, the killing of eight people working at spas in Georgia, including six women of Asian descent, released outrage over the nation’s longstanding failure to take discrimination against Asian-Americans seriously.

The fear and frustration had been simmering since the beginning of the pandemic, as racist language and false claims about the coronavirus by former President Donald J. Trump helped fuel what advocates said was rising violence and harassment.

Graphic videos of older Asian-Americans being attacked in Asian communities leading up to the Lunar New Year holiday, as I reported last month, more recently drew anger and shock.

But as my colleagues reported, many of the incidents have not been charged as hate crimes, because of a host of complex factors that make them particularly difficult to prosecute.

So this week, when the authorities in Georgia seemed to dismiss the idea that racial animus was a factor in the spa attacks, many were enraged anew.

A law enforcement official said that in the gunman’s own words, his actions were “not racially motivated,” but caused by “sexual addiction.” Many Asian-American women recognized instantly that the two implied motivations, racism and sexism, are inextricably intertwined, my colleague Shaila Dewan wrote.

“Law enforcement and society in general tends to really not understand how racism and hate and prejudice is directed toward Asian-Americans, and certainly not understand how it’s directed toward Asian-American women,” Helen Zia, an activist and author who has tracked anti-Asian violence, told Shaila. “So the instant reaction is generally to discount and dismiss it.”

Part of why it’s so difficult to talk about the discrimination Asian-Americans face is that there is no such thing as a unified Asian-American experience — far from it.

Some of our families have been in the United States for generations, and some have come from dozens of countries under many different circumstances, including as refugees.

[Read more about how racism and sexism intertwine to torment Asian-American women.]

Members of Asian-American communities have varying levels of education and English proficiency and can land at different places on the American political spectrum, sometimes depending on the issue. Some, particularly first-generation immigrants, are less inclined to call out racism, while their children might be more willing to speak up.

One tie that binds Asian-Americans, though, is our history, America’s history, of treating people of Asian descent as anonymous sources of labor, foreign objects to be expelled.

And that discrimination has tended to peak in times of national crisis, Lok Siu, an associate professor of Asian-American and Asian diaspora studies at the University of California, Berkeley, told me.

In the early 20th century, there was, she said, “a chain of exclusion acts,” meant to keep Asians from immigrating to the United States. During World War II, Japanese Americans were incarcerated in internment camps. During the Cold War, Chinese American organizations were targeted. After the Sept. 11 terrorist attacks, there was a rise in violence against Asian Muslims and Sikhs.

Now, of course, we’re living through a catastrophic pandemic and anti-Asian violence is rising again, experts have said.

“They’re seen as isolated incidents — we don’t see them as part of a systemic form of racism,” Dr. Siu said. “But it’s built into the structure, and built into the way we think of Asians and the way we insert Asians into society.”

She said that the underlying questions in each era have been the same: “Are they American enough? Are they loyal enough? Can they assimilate?”

[See the latest updates on the Atlanta spa shootings.]

Dr. Siu noted that many of the moments of national crisis coincide with real moments of geopolitical tension, like with China.

“I think the expression of violence against certain groups and the scapegoating really point to larger existing anxieties and structural issues,” she said. “These are much broader, bigger questions.”

A first step toward stopping anti-Asian discrimination and violence, Dr. Siu said, is acknowledging it has long been a part of American history — then working across communities to fight it.

Police departments nationwide are increasing patrols in Asian communities, including in Los Angeles and San Francisco, where there had been a rise in anti-Asian violence in recent weeks. [New York Times]

The Stop AAPI Hate Reporting Center received 3,795 reports of anti-Asian racism since March 2020. Nearly 45 percent of them were from California. [Sacramento Bee]

Newspapers across the state explored the history of violence and racism against Asians in California.

The Senate confirmed Xavier Becerra, California’s attorney general, as President Biden’s secretary of health and human services after a bitter partisan fight that centered on his qualifications and support for abortion rights. [New York Times]

Gov. Gavin Newsom has not yet announced who will replace him.

New research found that nearly half of all California workers have claimed unemployment benefits at some point in the pandemic. The research illustrates the scale and the inequality of the job losses — and makes clear that the crisis is far from over. [New York Times]

An annual nationwide survey found that homelessness was on the rise for the fourth straight year, but that data doesn’t yet reflect the pandemic. [New York Times]

Nine charts on the economy, consumer behavior, education and more help explain life in California during the pandemic. [CalMatters]

The $1.9 trillion U.S. stimulus package included more than $31 billion in federal aid for Native Americans, who have been among the hardest hit by the pandemic. [New York Times]

Daniel Ruiz died of the coronavirus in a California prison. Now, his family is suing, calling it a wrongful death. [The Guardian]

Ten women are suing the Walt Disney Company for what they have called “rampant gender pay discrimination.” The women have also added a claim involving pay secrecy, a topic that is becoming a larger part of the national conversation about workplace equality. [New York Times]

California theme parks will restrict visitors to residents only when they reopen next month. [KTLA]

In 1976, Steven Spurrier, an Englishman who owned a wine shop in Paris, set up a blind tasting of 20 wines — a mix from France and California — for a panel of French judges. The verdict was a shocker. Mr. Spurrier died this week at his home in England. [The New York Times]

It’s the weekend. Take care of yourselves, and maybe play your plants some music.