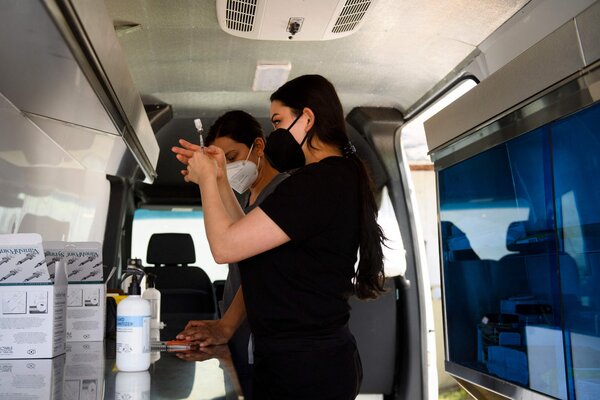 Los Angeles is taking its vaccination efforts on the road.

The city is gradually winding down its mass vaccination sites and will be fully mobile starting Aug. 1, marking what one deputy mayor called “the end of an era.”

“It’s a natural evolution,” said Jeffrey Gorell, the deputy mayor for public safety, who is overseeing vaccine efforts in the city. “Rather than having fixed sites where we ask community members to come to us, the natural progression is for us to move into more of a mobile approach where we can go to the populations where we need to be for areas with the lowest vaccination rates.”

With mobile sites, “we believe we can get to the most challenged areas,” he said.

Mobile vaccine units have been a part of the city’s vaccine program. But as the city’s 10 mass vaccination sites close over the coming weeks, the city will up its mobile units from 10 to 14. The city stopped offering vaccines at Dodgers Stadium on Thursday but other mass sites remain open.

Specially outfitted vans and trailers will give the city “tactical vaccination capabilities” so they can get into communities that may be underserved, hesitant or simply don’t have the time because of work requirements, Mr. Gorell said, adding that mobile teams will be able to extend evening and weekend hours.

“Rather than hunker down at a fixed site waiting for them to come to us, we can be in their neighborhood and available,” Mr. Gorell said. “We’re going to be a truly mobile presence in the city.”